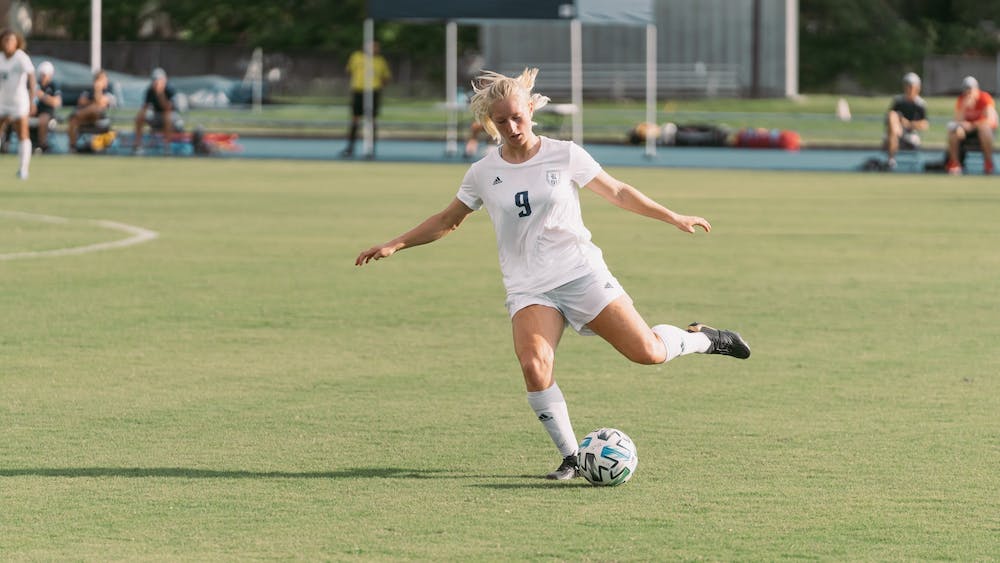 Just a few years ago, nobody could have guessed that Mijke Roelfsema’s soccer journey would have taken her to Rice, least of all herself. Now, the senior defender is front and center as the Rice soccer team attempts to fight its way back to the NCAA tournament, after their first-ever sweet sixteen appearance last season. Roelfsema’s long and winding soccer journey, which now has her as the focal point for the Owls defense, began over 5,000 miles away when she was just  five years old living in Holland.

“I started playing soccer when I was five years old,” Roelfsema said. “The first ten years, I only played with boys because there were no girls teams or these teams were not at the same level I was playing.”

As her love and experience for the game grew, Roelfsema honed in her skills and position. With the help of her coach growing up, Roelfsema found her niche in defense.

“In the beginning, I would run around and play almost every position, but I was always pretty good at tackling, and so my coach decided to play me as a defender,” Roelfsema said. “I played the outside back position before I came to Rice, but here, they needed a center back.”

Roelfsema’s soccer journey took her to play for ADO Den Haag. ADO is located in the city of the Hague, and the club competed in the Vrouwen Eredivisie, the highest women’s soccer league in Holland. According to Roelfsema, the competition and advice she received at ADO helped her become a more experienced and composed soccer player.

“I was very young when I started playing for ADO which was scary at first because I felt a lot of pressure to prove myself,” Roelfsema said. “We played in a stadium against some of the best players in the country, which helped me to build a lot of experience as a soccer player. I had the opportunity to play with many older players who gave me a lot of advice on how to defend and how to play.”

Following her time at ADO, Roelfsema decided to play college soccer in the U.S., where she joined Boston College. However, Roelfsema struggled to transition to her new environment.

“The transition from Holland to the States was pretty hard,” Roelfsema said. “It was very overwhelming in the beginning, especially not being able to speak the language well. I learned how difficult it is to be yourself when you cannot communicate well with the people in your environment. I barely spoke for the first couple of months and had a really hard time with school. Looking back, I think it took me roughly two years to actually feel at home in America, [to] feel like I could be myself, and play how I wanted.”

In addition to the challenges Roelfsema faced off of the pitch, she also had to adapt to a different style of play on the pitch.

“I had to get used to a different style of soccer, which meant that I had to change the way I played soccer,” Roelfsema said. “The game is very different compared to what it is at home. In Holland, we play a very technical and tactical game based on possession, while in America, the game is more physical, faster because we can sub more, and is based on kick and run.”

Following a coaching change at Boston College, Roelfsema decided to transfer. At the end of her recruitment process, Roelfsema ultimately decided to continue her soccer journey in Houston.

“I really liked talking to [head coach Brian Lee] and decided to visit the school,” Roelfsema said. “The campus immediately felt like home and the team was very welcoming so I made the decision to transfer.”

Once she arrived at Rice, Roelfsema was able to finally settle in. According to Roelfsema, her interest in people, which led her to become a psychology major, has driven her to find a community at Rice.

“I’ve always been very interested in people and why they do or say certain things,” Roelfsema said. “I am a person who likes to learn about others and I like asking people actual and real questions about their lives. As a psychology major, I feel like I learn a lot about myself and the people around me, and I can apply a lot of the information from class to my own environment.”

Roelfsema said she has also taken to Rice’s spacious campus and its surrounding neighborhoods.

“I like to go to Rice Coffeehouse because I always see at least one of my friends there,” Roelfsema said. “The campus is perfect for reading or playing sports so oftentimes I bring a book or I play spike ball or throw a football with friends. I often walk in the neighborhoods surrounding the campus. My friends and I have been to almost every park in the area, and we often go to picnics, play cards and throw the football around.”

Meanwhile, on the pitch, Roelfsema has played a critical role in shoring up Rice’s defense ever since her transfer. Her role leading a defense that allowed less than a goal per game last season has been duly noted. Last season, Roelfsema was awarded Conference USA Defender of the Year and was a semifinalist for the MAC Hermann Trophy, given to the best player in college soccer. Going into this year, she was named a preseason first team All-American by College Soccer News. Roelfsema aims to continue her soccer career following college, while off the pitch, she is interested in getting her master’s. However, according to Roelfsema, planning ahead has never been her style.

“I am going to try to get drafted and play in the NWSL, which I am very excited about,” Roelfsema said. “I want to go back home to get my master’s, but I don’t necessarily have a plan for what I want to do after. I am not really a planner, and I don’t really like planning for the future because I enjoy living in the moment. My life has always taken some unexpected turns, [such as] transferring to Rice, and this has taught me to just let life happen and make the best of what you are given in the moment.”