Owls split on the weekend, get first win of the season in front of fans 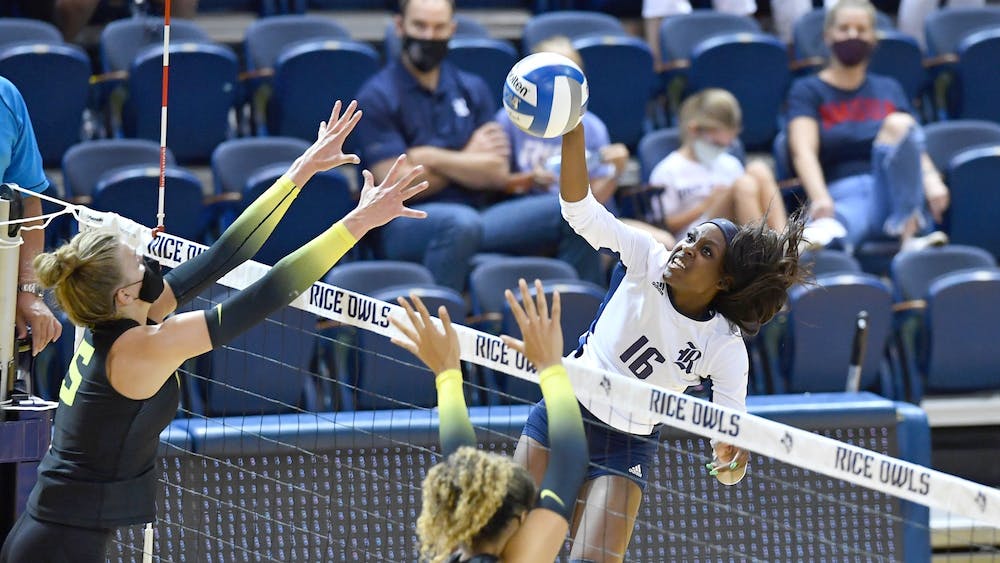 Last week, Rice volleyball hosted the University of Oregon and Southern Methodist University in the Adidas Invitational I. On Thursday, the Owls fell to the No. 13 Ducks in four sets, their first game with fans in attendance in nearly two years. Later that weekend, the Owls recorded their first win of the season against SMU. The matches over the weekend brought the Owls record to 1-3 on the season.

In the first game of the invitational, the Owls faced their second ranked opponent of the season in Oregon. The Owls lost a close first set but rallied back to take the second, led by strong offense from sophomore outside hitter Ellie Bichelmeyer and senior outside hitter Nicole Lennon, who recorded 13 and 20 kills respectively over the course of the game.  The Owls took an early lead in the third set but lost momentum as the Ducks came back to win sets three and four, ending the game.

For the first time in over a year, the Rice Owls entered Tudor Fieldhouse with fans in the stands, cheering them on. After the long hiatus due to COVID-19, the fan presence was felt by both coaches and players. Head coach Genny Volpe said she was thrilled to be back in front of fans and expressed her gratitude for the Rice faithful.

“It has been so awesome for us to play in front of our fans again,” Volpe said. “The team has been waiting for this for such a long time and the fact that we had some really great crowds has made the home atmosphere incredible. We want our fans to continue to come out and see how this team will continue to battle, grow, and fight hard for the blue and grey.”

Likewise, junior middle blocker Anota Adekunle said that playing last season without fans made her realize just how much playing in front of a packed crowd helps the team.

“It’s always a great feeling to play at home but this season the feeling is a little different,” Adekunle said. “Not having fans last year has really made me appreciate and miss that energy they bring to the game.”

On Saturday, the Owls rallied back after losing the first set, to claim their first win of the season, defeating SMU in four sets (25-27, 25-17, 25-22, 25-22).  Volpe said that she was pleased with how the team responded to the deficit and came back strong but knows that the team still has work to do to play at the high level that they can.

“Today we didn’t start well but really battled back,” Volpe said. “We need to improve our efficiency when we are in trouble and receive at a more consistent rate. Once we clean those things up I know we can execute at a higher level.”

Adekunle stepped up for the Owls in their win on Saturday. The Humble, TX native recorded a career-high 28 kills and five blocks. Volpe spoke very highly of Adekunle’s strong performance after the game.

“Once we were able to get Anota going, things started to change in our favor,” Volpe said.  “It was definitely Anota’s day to shine. I’m so proud of how hard she worked to get open and be available to score.”

After the game, Adekunle credited her teammates for elevating her play in the win.

“This was a great team win,” Adekunle said.  “Going into the game one big thing we talked about was to improve our serve and pass. I think we executed really well in that area, which was a big reason as to why I was able to be successful today. My setter [Graham] also played a big part in my success, I always have faith in her that she’ll set me up to be in the best position possible to kill the ball.”

The Owls will host the second leg of the Adidas Invitational this weekend at Tudor Fieldhouse, with games against Louisiana State University and Sam Houston State University.