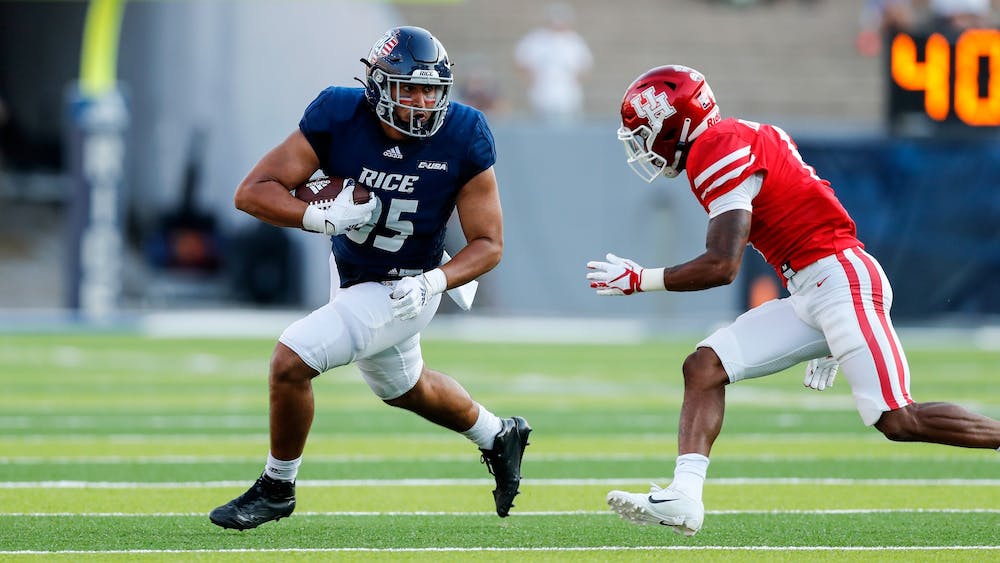 The Rice football team failed to take home the Bayou Bucket on Saturday in front of a home crowd of over 26,000 fans, losing to the University of Houston by a score of 44-7. The loss dropped the Owls to 0-2 on the season, while it capped off a big week for their crosstown rivals, who were recently invited to join the Big 12 Conference, with their first win of the season.

According to head coach Mike Bloomgren, the Owls did not have any answers for the Cougars’ on either side of the ball.

“I’m a little bit shell-shocked right now,” Bloomgren said. “That’s not at all how I thought this game would go. I wasn’t prepared for it to go that way. I thought we would be able to fight them tooth and nail and that’s not the way it went. I don’t have a lot of answers for you. I didn’t have a whole lot of answers for the team.”

The first quarter of the home opener was one to forget for the Owls. The defense was unable to contain the Cougars as their offense scored 17 points with 188 yards of offense. The Owls offense was mostly ineffective as they only held the ball for 3 minutes and 20 seconds and only gained 30 yards.

Bloomgren said that the Cougars’ offense got going before the Owls’ defense had a chance to settle in the game.

“They did a heck of a job,” Bloomgren said.“To come in and to be able to score 17 points that quick on our defense, that’s tough stuff.  Offensively we weren’t able to keep the ball. Anytime somebody scores in the first quarter or on the first drive, you know it’s like okay let’s get our bearings. Unfortunately, there were like three drives before we were able to settle in.

As the game went on turnovers on the offensive side of the ball stymied the Owls’ attempt to level the score.

Redshirt freshman quarterback McCaffrey, who was handed the starting quarterback role after redshirt sophomore Wiley Green threw three interceptions in the Owls’ opener against Arkansas, went 9-19 with just 86 passing yards and one touchdown to go along with three interceptions of his own. McCaffrey said that he needed to do a better job protecting the ball and leading this offense.

“There’s a lot of room for improvement as our team, obviously, that’s reflected on the score, but, me personally, I got to do my job better protecting the football and distributing the ball,” McCaffrey said. “We had a couple of drives where we’re driving and then they end, and that’s the consistency factor that we’ll have to reflect back on and find an answer for.”

Bloomgren said  that more playing time would be significant for McCaffrey’s improvement, given that he only joined the program over the summer after transferring from the University of Nebraska.

“Luke has been here since mid-June and every rep he gets has value, and he improves as he learns,” Bloomgren said. “When the quarterback doesn’t have time to get his back plant foot in the ground on a five-step drop, it’s hard to evaluate, it’s hard to blame him.”

The closest the Owls came to getting back into the game was an 11-play, 81-yard touchdown drive in the final seconds of the first half, which brought the Owls within ten. However, the Cougars responded immediately at the start of the second half, with a 17-play, 75-yard touchdown drive of their own. On that drive, the Cougars converted two third down attempts for 19 and 17 yards, to extend the drive and eventually put the game out of reach.

According to redshirt senior defensive lineman Elijah Garcia, who had six tackles and 0.5 sacks on Saturday, the defense’s inability to force fourth downs was part of the Owls’ downfall.

“I thought we played hard up front. On the back end, though, they threw some bombs [deep passes] on us. Part of that is on us too in [pressuring] the quarterback and helping out our secondary,” Garcia said. “It’s definitely tough. This week we just got to work on third down and just getting off the field, because that really hurt us today.”

Despite two consecutive large losses, Bloomgren is remaining optimistic that the team can improve and still achieve the goals that they started the season with.

“We just need a lot of growth if we’re going to do the things we’ve talked about in this program this year,” Bloomgren said. “I still think we can. I don’t think this is going to be terminal. This is not going to affect our ability to go to a bowl and win it. But if we play like this, there is a zero chance”

Next Saturday, the Owls will make the trip to Austin to play the University of Texas (1-1) at 7:00 pm.

Despite the matchup against this big program, Bloomgren is wary of the challenges that are on his squad that need to be solved.

“We’ve got a heck of an opponent coming up in Texas next week, but we’ve got a lot to solve with the Rice Owls before we worry about any other opponent right now,” Bloomgren said.