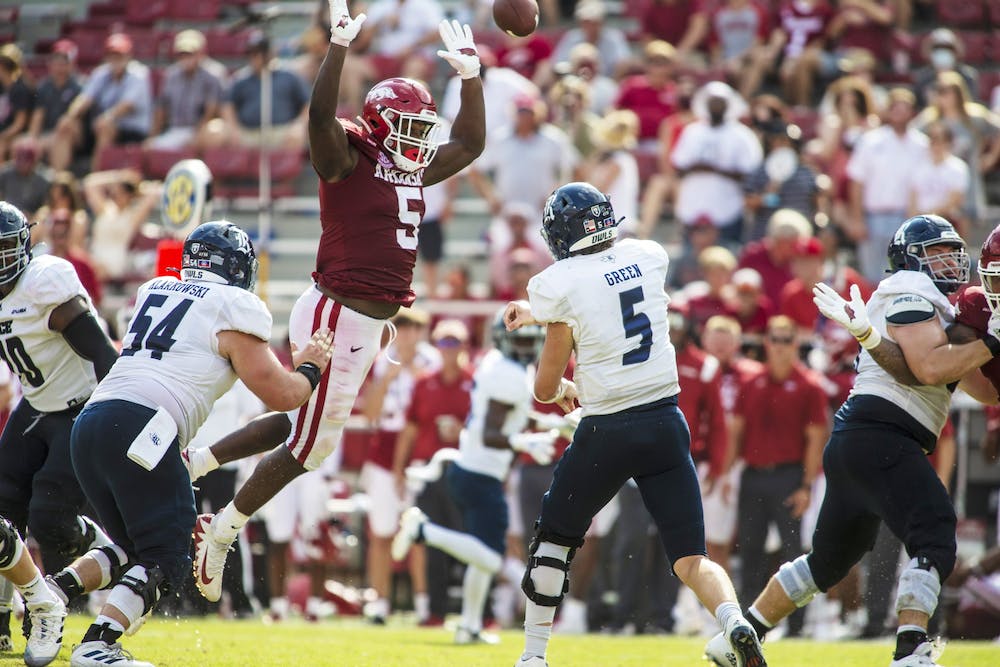 The Rice football team lost their first game of the season in a 38-17 defeat to the University of Arkansas. Playing away from home at Razorback Stadium in front of over 64,000 fans, the Owls kept up with the SEC team for a majority of the game, holding the score to a 17-17 tie at the end of the third period. However, at the start of the fourth quarter, the game shifted in the favor of the Razorbacks as they were able to capitalize on several Rice turnovers to run away with the game.

Head coach Mike Bloomgren acknowledged the disappointing defeat but held out praise for the way the team executed throughout most of the game against an SEC team.

“I am heartbroken for the way that it turned out,” Bloomgren said. “We were exactly where we wanted to be with a team from the SEC West. We had our chances, but we just didn’t get it done. It is as simple as that. We did everything that we wanted to do.”

Despite the loss, redshirt sophomore quarterback Wiley Green said the game proved that the Owls can compete with some of the top programs in college football.

Green, who split time with redshirt-freshman quarterback Luke McCaffrey, threw three interceptions in the fourth quarter, after a turnover-free first three quarters. After the game, Green said that he needed to cut back on the turnovers to give the Owls a shot to win.

“I think that we shot ourselves in the foot a couple of times,” Green said. “Obviously, you looked back at the tipped pass for an interception and an interception at the sidelines. We can’t have those. I’ve got to play better from an overall standpoint. The guys expect more from me and I expect more from myself. Ready to move on and get some good film on this, get better from it, and move on.”

The game gave the Owls little clarity in their ongoing quarterback competition. Green, who started the game, completed 12 of his 25 passes, for 152 passing yards including a 41-yard touchdown to redshirt sophomore receiver August Pitre III. After the game, Bloomgren was quick to affirm that he and his staff have not lost faith in Green, despite the turnovers.

McCaffery, on the other hand, ended the game five of ten for 75 yards and no touchdowns or interceptions. McCaffrey led two drives deep into Razorback territory, but one resulted in a missed field goal and the other stalled on a failed fourth-and-one attempt. After the game, Bloomgren was non-committal on who will start for the Owls next week.

“We’re going to watch the film and talk about [whether or not Wiley Green will start next week] [as] a staff,” Bloomgren said. “These guys both know that [the quarterback situation] could stay the same or could change. There are no guarantees. It is just going to be who gives us the best chance to score points and win games week-to-week.”

One area, however, that Bloomgren was confident in was the performance of his defense. Despite giving up 38 points and 373 total yards of offense, the head coach said he was proud of the strong performance that the defense had in the first half, where the Owls gave up only seven points and forced five punts.

“We played really, really [well] in the first half,” Bloomgren said. “We had five three-and-outs in the first half. That is a dominant defense. We knew that they’d be good, it was a really good performance by them ... but that first half was a thing of beauty.”

While the defense allowed 31 points in the second half, Bloomgren attributed that to the turnovers by the offense.

“In the second half, the turnovers put [the defense] in horrible situations deep in [our] territory,” Bloomgren said. “There will be things that we need to improve on [from this] game and we will. We are going to make some corrections and have some tough conversations and learn from this film on Monday.”

Junior linebacker Antonio Montero, who had a total of 11 tackles and one sack, believed that the defense showed flashes of their potential in the first half and was optimistic about the performance of the younger players on the defense.

“For the most part, we knew what they were going to run and we played it well, especially in the first half, so we are optimistic about that,” Montero said. “The young guys all played very well and I’m optimistic about how they are coming along.”

According to Bloomgren, the Owls did a lot of things well, but need to clean up their costly mistakes going forward.