Not because it’s easy: Rice heads to UT 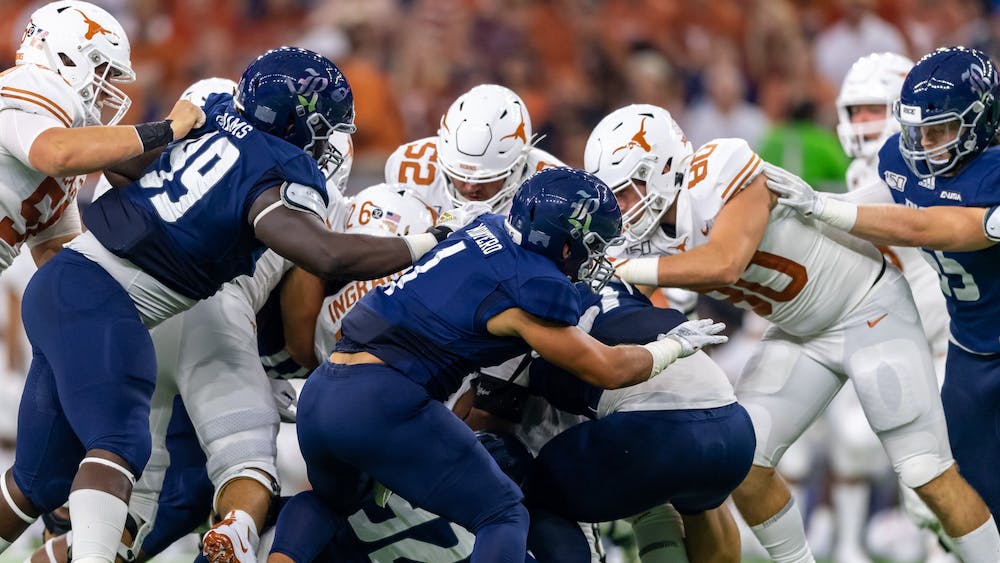 It’s well established that Rice hasn’t beaten the University of Texas, Austin at football in a while – 27 years to be exact. You’d have to go back even longer, to 1965, to find the last time the Owls did what they’ll try to do on Saturday – beat the Longhorns in Austin. As they prepare, head coach Mike Bloomgren said that the Owls can’t afford to focus on the magnitude of the game.

“Our focus is going to be on us,” Bloomgren said. “[It’s going to be] on fixing the things that need to be fixed, and on preparing to play our style of football this weekend.

The Owls enter the game at 0-2. After hanging with the University of Arkansas through three quarters in their season opener, the Razorbacks ran in way with the game in the fourth quarter to hand the Owls a 21-point loss. Then, last week, the Owls took a beating from the University of Houston in a 44-7 loss.

Going into week three, the Owls will make some changes. Most notably, they finally have clarity at the quarterback position. After switching between redshirt sophomore Wiley Green and redshirt freshman Luke McCaffery in week one, McCaffery led the offense the entire game against UH, despite throwing three interceptions. According to Bloomgren, while both quarterbacks are prepared to run the offense, he is sticking with McCaffery, who only recently joined the Owls from the University of Nebraska, going forward.

“We are going forward with Luke McCafery right now,” Bloomgren said. “We think [he] gives our team the best opportunity to be successful. There [are] things that he brings to the position and to the team that are different – the ability to affect the game with his legs, the ability to keep plays alive.”

Texas, meanwhile, enters the game on the heels of a disappointing loss, also at the hands of the Razorbacks. The Longhorns entered the game ranked No. 15 in the country, their 40-21 loss knocked them out of the AP rankings entirely. The Razorbacks ran for 333 yards, including 73 from quarterback KJ Jefferson. According to Bloomgren, the Owls will look to Arkansas as an example of how to exploit Texas’s run defense.

“What Arkansas did with their quarterback [in the run game] was incredible,” Bloomgren said. “I certainly think we’ll have some opportunities to do that ourselves.”

Bloomgren also said that Arkansas’ performance against Texas gives him hope for what his run defense can do on Saturday.

“What our defense was able to do to Arkansas for those first three quarters, it was pretty impressive when you go back and look at the way Arkansas was able to run the ball last Saturday night,” Bloomgren said.

But Bloomgren said that he is wary of reading too far into the teams’ respective games against the Razorbacks.

“You always have issues when you compare teams in games [against] common opponents,” Bloomgren said. “It’s a great resource, but it can also be dangerous.”

The Longhorns also had to replace longtime starting quarterback Sam Ehlinger this season, and two weeks in, they are yet to settle on a starter. While he won the starting job in the offseason, redshirt freshman quarterback Hudson Card was replaced by junior Casey Thompson after struggling against Arkansas. According to Bloomgren, the Owls now have to account for the rushing ability of Thompson, who will start on Saturday.

“Changing the quarterback up, that’s going to lend itself to more [of a] quarterback run game for them,” Bloomgren said. “I think we’ll probably see Hudson too, [so] that’s something we’ll prepare for.”

Thompson will be joined in the backfield by sophomore running back Bijan Robinson. Robinson, who averaged 8.2 yards per carry on 86 attempts last year, placed No. 7 on Sports Illustrated’s list of Heisman Trophy favorites going into this season.

The Owls defense will be tasked with stopping Thompson and Robinson. After placing No. 12 in the country in points per game allowed last season, through two games, Rice has allowed 41 points per game, good for No. 122 in the country. According to junior linebacker Antonio Montero, who is currently tied for the most tackles among all Conference USA players, the Owls defense has shown flashes, but needs to improve its consistency.

“We felt like we’ve played good quarters, but not full games,” Montero said. “That’s not good enough. We’ve given up too many points, which I know will get corrected.”

The last time these two teams met, Texas won handily by a score of 48-13. As it stands now, the Longhorns have a 73-21 edge over the Owls in the all-time series. According to Bloomgren, the team knows how significant it would be for Rice to pull off the upset for the first time since 1994.

“You look back at the history of this game, and how many times it’s been played, it’s a great rivalry,” Bloomgren said. “Now it’s been a little bit of a one-sided rivalry. But we’ve done a lot of firsts in the last three years, and we’d sure like to find a way to earn this victory.”