No. 24 soccer leaves Lady Techsters on read in last-gasp win 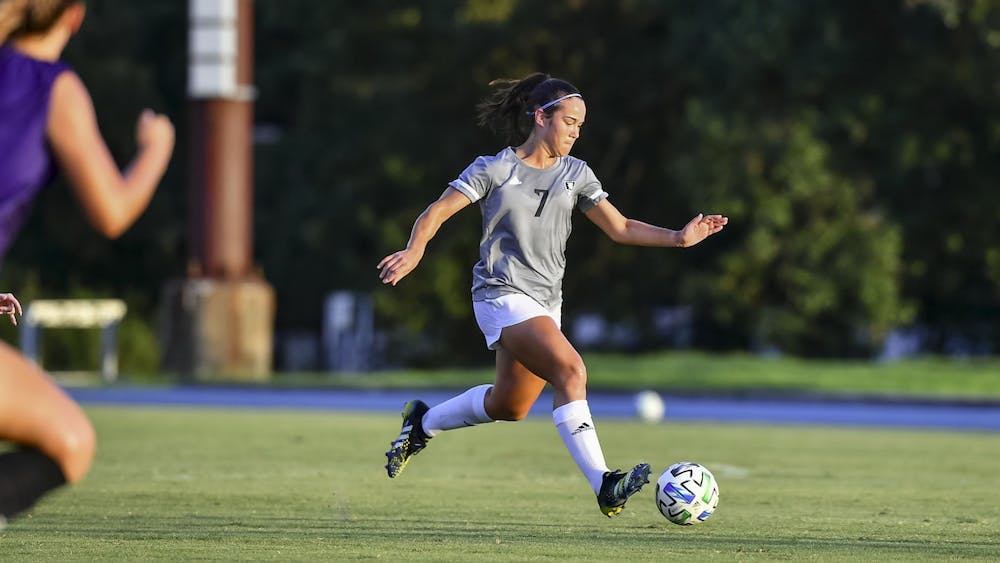 Rice soccer didn’t make it easy for themselves Friday night at Holloway Field, but they were able to pull out a win over Louisiana Tech University to bring their conference record to 2-0. With the game tied at 1-1 in the 81st minute, freshman midfielder Catarina Albuquerque connected with a header to break the tie. The Owls held on in the final nine minutes to secure the win. According to head coach Brian Lee, the team was confident they’d get the win, even with the score tied so late in the game.

“[No] matter who we play, we tend to end up in close games,” Lee said. “So we’re always prepared for that.”

Playing their first conference home game of the year, Rice got out to an early lead when junior midfielder Serena Pham rebounded a missed shot off of a corner kick and sent it past the keeper in the 17th minute. The Owls had a chance to double their lead in the 30th minute, but junior defender Ziyana Samanani had a shot cleared off of the goal line by a LA Tech defender. Rice played sound defense to close out the half, and carried a 1-0 lead into the locker room.

The tide shifted towards LA Tech at the start of the second half. The Lady Techsters managed four shots in the first four minutes of the half, while Rice didn’t get another shot off until the 53rd minute. Finally, in the 61st minute, LA Tech took advantage of a botched clearance by Rice to even the game at one. According to Lee, with the way LA Tech was pressing, it was only a matter of time before they scored the equalizer.

“I thought the first half we played really well, [but we] just [had] a flat start to the second half,” Lee said. “We were probably fortunate that Louisiana Tech scored on the earlier side so that we still had time to reassert ourselves.”

Rice went back on the attack late, looking to retake the lead. After a handful of opportunities amounted to nothing, Samanani drew a corner with a shot in the 81st minute. Junior midfielder Delaney Schultz sent the corner towards the front post, where Albuquerque met the ball and headed it into the far side of the net for her first goal of the season. The Owls defense held up in the final nine minutes and secured their eighth win of the season. According to Albuquerque, while she was thrilled to score the winning goal, it was really a product of the entire team’s effort.

“Getting the game winning goal is [always] special,” Albuquerque said. “We were pushing for the win, and the team deserved it. It just happened to be me this time, but any of us could have scored.”

While the Owls managed two goals, both came off of corner kicks meaning that neither came in open play. According to Lee, the team is happy to play to that formula and isn’t worried about the lack of open-play goals.

“We spend a lot of time on [set pieces],” Lee said. “In college soccer, set pieces are a huge part of the game. But we feel good about how we attacked and the chances we created. [I] just hope we keep getting better and better about finishing the run-of-play chances.”

With the win, the Owls bounce back from their loss against the University of Pennsylvania last Sunday and move to 8-2-1 on the year. The loss to Penn was the Owls second loss in three games,  following a loss to Southern Methodist University the previous Sunday, after starting the season undefeated in their first seven games. According to Lee, it was important for the team to get back in the win column as their conference schedule heats up.

“It was a big deal,” Lee said. “[Against] SMU we thought we played really well and lost. [Against] Penn, [in the] flow of play we played great, but I’m not sure we deserved to win. So we needed a rebound and we needed a result just [to] make sure we’re keeping [our] spirits high.”

Going forward, the team has six more games on their conference schedule before the conference tournament, where they will look to repeat as conference champions. According to Lee, repeating will be tough, especially since he knows that they will be at the top of every team’s hit list.

“If you have a ranking by your name, and trophies that you’ve won, you’re going to get everybody’s best effort,” Lee said. “I think it’s going to continue. We just hope we keep ending up with one more goal than them.”

The Owls travel to Bowling Green, Kentucky where they will face Western Kentucky University on Saturday, Oct. 2.