Review: “My Fair Lady” is a satisfying return to live theatre at the Hobby Center 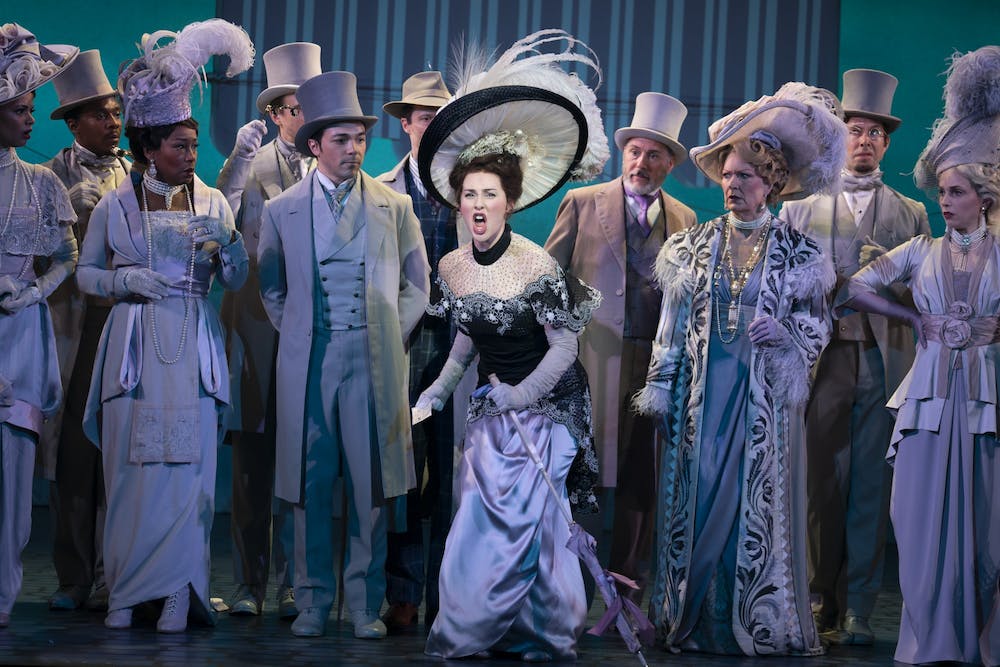 Live theatre returns to the Hobby Center on a high note this week with the touring production of “My Fair Lady,” which runs through Sept 19. Despite the pandemic, the house was almost completely full with masking policies enforced. “My Fair Lady” was a fabulous reminder of everything live theatre can be at its best. The technical elements were fantastic and the acting and staging were first rate.

“My Fair Lady” is the story of Eliza Doolittle (Shereen Ahmed), a poor flower girl in London, who is taken in by phonetics experts Professor Henry Higgins (Laird Mackintosh) and Colonel Pickering (Kevin Pariseau) as part of a bet to see if Prof. Higgins can coach her to pass as a noblewoman. The show includes classic numbers such as “I Could Have Danced All Night,” “With a Little Bit of Luck” and “Just You Wait.”

The performances of Ahmed and Mackintosh were masterful. Ahmed compellingly captures Eliza’s struggle to improve herself and the joy she finds in it, while Mackintosh’s Higgins is such a thoroughly horrible person that you cannot help but hate him. He is misanthropic, misogynistic and self-important, providing a stark contrast to  Pariseau’s more sympathetic Pickering.

It was Donald Holder’s lighting design which stood out the most though. Holder’s use of colors on the backdrop set the tone for each scene as well as adding another layer to the set by conveying the time and weather. The lighting never distracted from the show, but between the spots and the individual lighting fixtures around the set I was constantly aware of how much they directed the audience’s attention and added to the performance.

In a show ultimately about class and privilege, Catherine Zuber’s costumes were an excellent visual representation of the social hierarchy on stage. From the darker layered clothing worn by the laborers to the pure white suits and dresses of the aristocracy at the races, it was clear that every single piece of clothing and accessory had been thoroughly researched and thought through. Because of this, Zuber’s costumes are able to place the audience immediately in the scene before the first words of the show are even spoken.

However, it would be remiss of me not to mention the problems inherent in “My Fair Lady” as a show. The relationship between Eliza and Professor Higgins is abusive, and when Higgins is confronted with this he digs his heels in and claims that the important thing is he treats everyone equally terribly. Yet he and Eliza still end up together at the end of the show.

While the majority of “My Fair Lady” pokes fun at the stodginess of the upper classes, mocks the self-important narcissism of many men and suggests that, like Eliza, anyone could do anything if given the resources and the opportunity, the conclusion of the show completely undercuts these themes. Perhaps that is why it feels that director Bartlett Sher, who otherwise demonstrates an impressive command of space and timing with his staging, tries to sweep the show’s final scene under the rug. The reunion between the two leads is short before Eliza immediately sprints off through an exit that did not really exist in the space Sher had constructed for the scene. This leaves the ending more ambiguous than it would otherwise be, something that is altogether an improvement on the scripted ending 一 especially in light of a more upsetting than normal conclusion, given how wonderful Mackintosh was at being just awful.

Ultimately, though, “My Fair Lady” is a fantastic return to live theatre for the Hobby Center. It was wonderful to be back in a theater after the last few years, and I highly recommend catching the end of the show’s run to anyone looking for something to do this weekend.