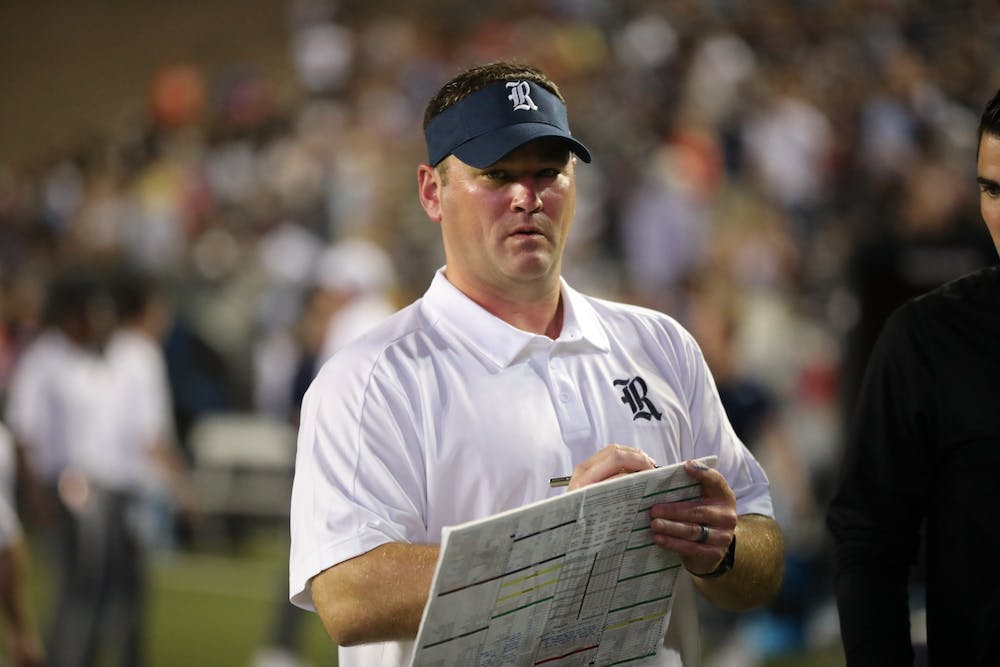 When the Rice football team beat No. 15 Marshall University 20-0 last December, their first win over a ranked opponent in 23 years, it was easy to see it as a defining moment for the program. The Owls, who had won just one game so far in their pandemic-shortened 2020 season, and only six games in head coach Mike Bloomgren’s three years at the helm, seemingly came out of nowhere to shut out a top-15 team. But according to Bloomgren, for himself and his team, it just confirmed what they already knew.

“A lot of people were like ‘oh my gosh, you beat the No. 15 team in America,’” Bloomgren said. “That was a big deal for our fanbase. For our players and our staff, that wasn’t a mountaintop experience, but a proof of concept – that if we do the things that we talk about, we can beat anybody on our schedule.”

After the Marshall win, the Owls closed out their five-game season with a five point loss to conference champions University of Alabama, Birmingham, bringing their record to 2-3. According to Bloomgren he saw enough in the shortened season to know that the team is headed in the right direction, but he knows the team needs to win more games.

“To say that there’s not progress out of the end of last season would be crazy,” Bloomgren said. “But on paper, as things are, we were 2-3. And in our business, you are what your record says you are. You are what you earned, and that’s what we earned last year. So now, we gotta go to a bowl [game]; we gotta do some things to let our players feel the rewards for the work that they’ve put in.”

While the team may not be where he envisions them quite yet, Bloomgren, who had previously served as the offensive coordinator at Stanford University, said that they are far better off than they were when he took over the program.

“That first year was very tough,” Bloomgren said. “We had to do a lot of things to get the football right, and to get people to understand the standards of this program.”

After a 2-11 finish in his first year, Bloomgren expected the Owls to show progress in year two. But despite a string of close games including some against Power 5 opponents, they began the next season with nine straight losses.

“[At 0-9] I think every program in America would be scared to death of going 0-12 or 1-11,” Bloomgren said. “There are frustrations, there are disappointments. [You have] to be a bit of a cheerleader in the locker room to reassure people that we’re doing the right things.”

He and his team stayed the course, and finished the 2019 season with three straight wins. But Bloomgren said that it took all the focus he had, as well as the help of two mentors, to do so.

“For me, it was having [Carolina Panthers head coach] Matt Rhule who had [gone] through [a similar rebuild at Baylor University], and was talking to me every week about the progress he was seeing,” Bloomgren said. “He caught every game we played, and he would talk to me and say you’re doing this [right] and this [right], and you’re kids are starting to believe, keep staying the course. And [Stanford head coach] David Shaw would say ‘Bloom, I’ve been there, this is how you chip away at it.’ Having those two people allowed me to keep the faith more than people outside.”

Then, going into last season, Bloomgren said he expected the team’s progress to finally produce results.

“Year three is a year you always point to in a rebuild,” Bloomgren said. “You wanna make a bowl game, you wanna show progress.”

Unfortunately for the Owls, a COVID-19 affected season had other plans. The team was only able to play five of the 12 games originally on its schedule. According to Bloomgren, had it not been for the pandemic-shortened season, the Owls would have taken a step forward as a program.

“If we could have played our whole schedule, I believe we [would have been] a bowl team,” Bloomgren said.

Now, as he is set to begin year four, Bloomgren is hoping that the Owls can finally begin their delayed breakout. He has built the team according to his philosophy: pound the rock, control the clock and play great defense. According to Bloomgren, while the offense needs to step up, the Owls are closer than people realize to fulfilling that vision.

“We have solved the defense [part],” Bloomgren said. “We’re playing great defense, [we were] No. 12 in the nation in scoring defense last year. Now, one thing I think people may not always get is how one works with the other. We need better plays in some positions, and we certainly need to put up more points, but [our offense was] second in the nation in time of possession last year. Because of that, our defense had the ball snapped against them 15 times less [per game] than the average in Conference USA. When you talk about how good our defense is doing, it’s also a function of how well our offense is doing at possessing the ball.”

While the offense ranked just 99th in the country in scoring last year, Bloomgren said he is convinced that his run-heavy style of offense that relies on multiple tight-ends can get the Owls to where they want to go, because he has seen it elevate his teams before.

“At Stanford we won the conference three out of [my] seven years there, and I don’t believe that in any of those years we were the most talented [team],” Bloomgren said. “One of our advantages is to be the contrarian. [We can] be something that nobody can practice against. [If an opposing team] doesn’t have tight ends in their program, they can’t line up with one tight end much less two or three.”

Whether or not the offense takes a leap will go a long way in determining the success of the team this year, and ultimately the success of Bloomgren’s tenure. Bloomgren said he knows that pressure is mounting from the outside for the Owls to have a winning season, but frankly, he couldn’t care less about the noise.

“I just can’t concern myself with people outside,” Bloomgren said. “I’ve got 150 people in this building that I’m responsible for. I’ve gotta help [them] every step of the way.”