Feminine joy and resistance: Niki de Saint Phalle in the 1960s’ opens at the Menil 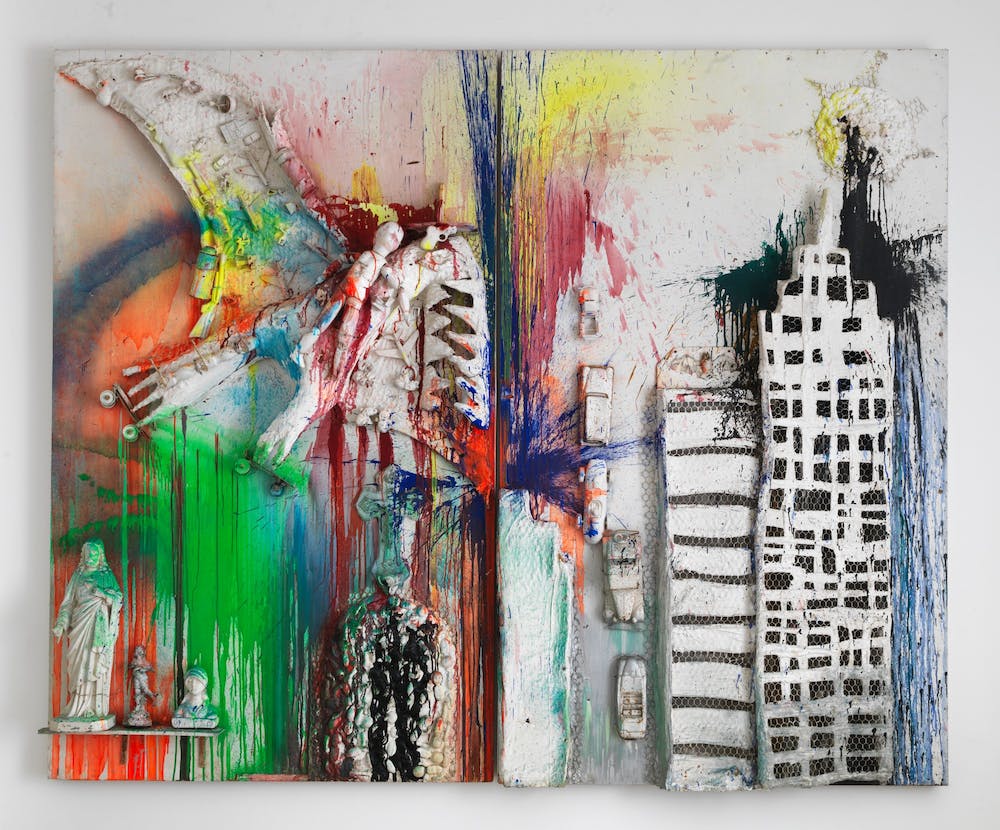 “She was the first free woman I saw,” iconic feminist Gloria Steinem once remarked after seeing Niki de Saint Phalle in the streets of New York. While de Saint Phalle would never claim to be free from the patriarchal violence that particularly targets women, her artwork throughout the 1960s charts the work of an artist seeking to become free. “Niki de Saint Phalle in the 1960s,” open free of charge at the Menil Collection now until Jan. 23, 2022, portrays the evolution of the iconic artist’s questioning, raging and joyous feminist works throughout her most radical period.

Prior to entering the gallery, “Bathing Beauty” greets the visitor: a voluptuous, colorful and topsy-turvy sculpture of a feminine figure spreading out to claim space. A stark departure from the constrained female forms of the nearby Cullen Sculpture Garden, this sculpture welcomes us with a thesis: de Saint Phalle aims to freely exist and inhabit as much space as she pleases. A turn into the gallery confirms this thesis as a massive painting looms directly in front of us.

The exhibit proceeds chronologically, beginning with de Saint Phalle’s early works as an assemblage artist. While not as ideologically cogent nor aesthetically striking as her later works in the decade, the assemblage becomes a key trope throughout her work. Additionally, the start of the decade demarcates when de Saint Phalle began to consider her audience.

“She starts to think about audience participation,” Co-Curator Michelle White said. “For ‘Portrait of a Lover,’ she created a portmanteau of her exes and told gallery audiences to throw darts at it.”

Within the next year, darts turned to bullets. In what would become one of her signatures, de Saint Phalle began creating “Tirs” or shooting paintings in 1961. After collecting assemblages of found objects into plaster, she places containers of pigment that are then shot to explode color over the canvas. Her theatrical shootings that encouraged audience participation made de Saint Phalle a press sensation. This exhibit features several of de Saint Phalle’s largest Tirs, imposingly towering over gallery visitors. These shooting paintings feature splatters of paint, the physical representations of her rage at the violent patriarchy while she simultaneously reclaims the symbolic tools of that violence.

However, by 1963, de Saint Phalle felt as if the “Tirs” had done their job. In White’s words, “she killed the patriarchy and moved to make the matriarchy” by starting a new iconic series: the “Nanas.” Sarcastically derived from a condescending French word that roughly translates to “broads,” the “Nanas” aim to change the depiction of women within art. Whereas sculptures typically operate under the male gaze and categorize women into static identity categories, the “Nanas” both reclaim archetypes by leaning into the imagined monstrous woman while also creating complexities via the assemblage of objects placed upon them.

Despite the heavy context of feminism, Rebecca Rabinow, the director of the Menil Collection, said, “These women are joyous [and] more than one thing.”

De Saint Phalle thus settled into the iconography of the “Nanas” and expounded upon them gloriously for the remainder of the decade. From the typical “Nanas” arose permutations attached to specific archetypes (such as the bride) and even mini “Nanas.” With the addition of the drawn “Nanas,” the throughline remained ideological, not material. De Saint Phalle’s work, which began violently and latently cynical, had devoted itself to the celebration of the female form freed from the patriarchal context of its oppression.

Bringing herself back to her roots of audience participation, de Saint Phalle proceeded to explore the interaction between viewers and the “Nanas.”

“The ‘Nanas’ show her desire for monumentality in the public,” Jill Dawsey, co-curator, said. “There’s a drive to expand, a want to create sculptures that usually commemorate male victories.”

Thus, the final room features video and photo recreation of the largest “Nana,” Hon. This sculpture, made and destroyed in Stockholm, features a woman laying back and giving birth. Visitors may walk through her vagina and into her, observing the cacophonous delights de Saint Phalle placed within her nana. From the humble roots of plaster assemblages, de Saint Phalle completed a monumental assemblage celebrating the female form.

“She makes a conscious decision that joy is a serious subject,” Bloom Cardenas, de Saint Phalle’s granddaughter, said. “There is a strong desire to put joyous women in the world.”

Despite the fact that the 1960s ended half a century ago, a feminist viewing of de Saint Phalle’s work rings just as true now as it did then. Women are still systematically denied power (and rage). Women are still devalued through sexist archetypes. In light of Texas’s recent decision to ban abortions after six weeks and instill another element of patriarchal control over the body, de Saint Phalle’s work to reclaim her own body, along with the symbolic body of the feminine, appears even more essential. While de Saint Phalle offers us a palette and path of feminine joy, she still reminds us of the dire need for resistance: in “Homage to Jasper John,” she shot a pouch of pigment and paint exploded, like blood, onto a coat hanger.