But because it’s hard: Owls implode in Austin 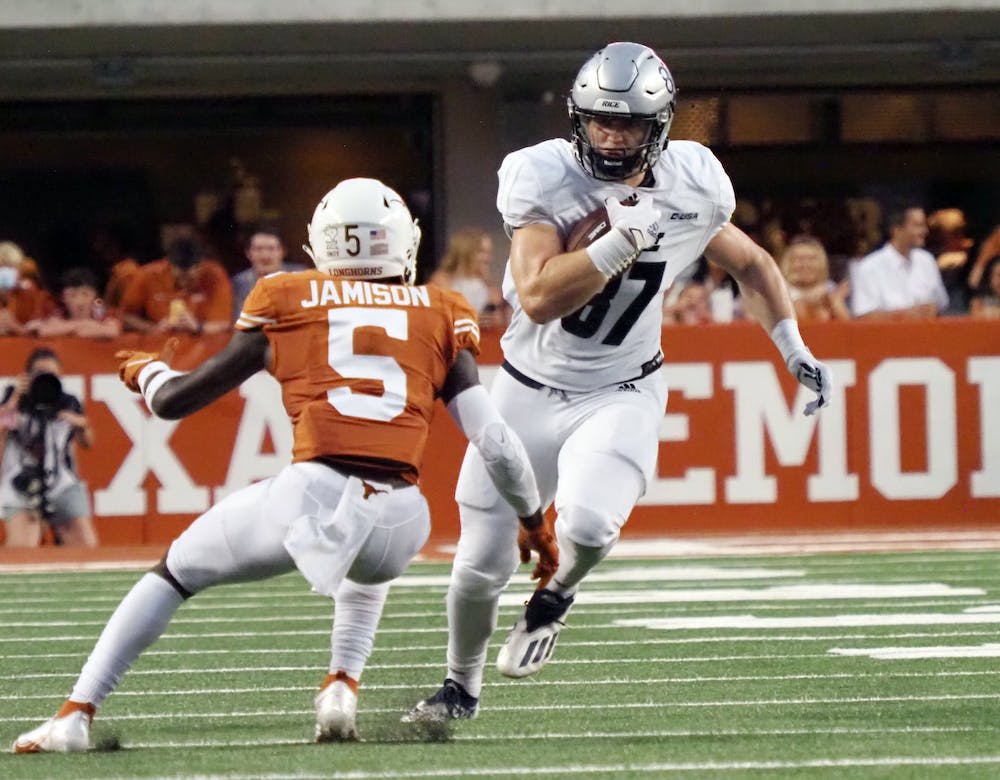 It’s probably safe to assume that we’ll all be long dead by the time Rice’s marketing department runs out of ways to make use of John F. Kennedy’s 1962 speech from Rice Stadium — the one where he famously asks, “why does Rice play Texas?” But after this weekend, it’s starting to look like it might be even longer before the Rice football team manages to beat their in-state rivals.

Not because it’s easy, Kennedy concludes, but Rice plays the University of Texas, Austin because it’s hard. The Owls learned that lesson again on Saturday, falling to the Longhorns 58-0 in Austin, good for their 15th consecutive loss against Texas and the second biggest loss in the 96-game history between the two teams.

According to head coach Mike Bloomgren, the end result wasn’t anywhere near what the team had envisioned going into the game.

“We’re very disappointed [with] how this game went,” Bloomgren said. “We think we’re better than the way we played tonight.”

On the first drive of the game, the Owls’ defense held Texas to a fourth down near midfield. But a 31-yard completion on fourth-and-three set the Longhorns up at the 10-yard line, and they punched in the opening touchdown three plays later. Rice was held to a three-and-out on their opening drive, but got the ball back with an interception on the next play.

A 31-yard run by freshman running back Khalan Griffin on the ensuing drive put the Owls well into the redzone. But with a chance to tie the game at seven-apiece, the drive stalled at the UT seven yard line, forcing a field goal attempt. Graduate kicker Collin Riccitelli missed the try from 30 yards out, which would have put the Owls within four, giving the ball back to the Longhorns. The Owls didn’t come close to scoring again until the game’s final drive, but after the game, Bloomgren said he was hesitant to call the field goal a turning point.

“I don’t think the missed field goal led to the final outcome of the game,” Bloomgren said. “When you’re gaining momentum, and you’re going to be sitting there at a 7-3 ball game, that’s what we wanted. But that kick didn’t miss any protections, or any reads, nor did it miss any tackles.”

From there, the game went south for Rice very quickly. Three plays into the next drive, Texas running back Roschon Johnson gashed the Owls’ defense for a 72 yard touchdown run, bringing the lead to 14. Another Rice three-and-out forced a punt, but redshirt freshman punter Charlie Mendes’ kick was blocked, resulting in a safety and giving the ball back to the Longhorns.

It only took seven plays before Bijan Robinson punched in another UT touchdown, his second of the day. Rice’s next drive stalled, and Robinson ran 62 yards for his third touchdown, putting the game comfortably out of reach with four minutes remaining in the first half. According to senior safety Naeem Smith, Robinson gave the Owls defense fits all night.

“He’s a very special player, definitely the best [running] back we’ve ever seen,” Smith said. “He made us miss as a defense a lot tonight. It’s frustrating as a defense because we have higher expectations for ourselves.”

Halftime couldn’t have come soon enough for Rice. Already playing without redshirt freshman quarterback Luke McCaffrey, who left the game at the end of the first quarter with an injury, Rice lost backup Wiley Green to injury late in the second quarter. Then, on defense, the Owls gave up two more touchdowns in the last 1:38 of the half, bringing the score to 44-0. According to Bloomgren, he was realistic with his team in the locker room at halftime.

“At halftime [I told the team], ‘Hey guys, I don’t know if we can overcome this,’” Bloomgren said. “‘But I know this: we’re going to evaluate the way we play every snap, and [if it’s] to our standards.’”

The second half was more of the same, albeit with Texas scoring at a slower pace. The Longhorns scored touchdowns on their first two drives of the half, while the Owls, now with graduate-transfer Jake Constantine in at quarterback, failed to score a single point. Rice came close to avoiding the shutout on their final drive, but the clock ran out with the Owls at the Texas seven yard line.

At the final whistle, the Owls had allowed 427 yards rushing on 10.4 yards per carry. Robinson ended the day with 127 yards and three touchdowns, while four different Longhorn running backs found the endzone. According to Bloomgren, the team’s run defense needs to do better to keep them in games.

“When you can’t stop the run in major college football, against a [running] back [as] talented [as Robinson], it’s going to get ugly, and it did.” Bloomgren said. “That kid may win a Heisman.”

The loss drops the Owls to 0-3 on the season, with all three losses coming against team’s from bigger conferences. Going forward, the Owls will have to regroup after two consecutive blowout losses. Over their past nine quarters of play, the Owls have been outscored 123-7. They have one more game, against a winless Texas Southern University team, before conference play begins on Oct. 2. According to Bloomgren, the way forward is to take the season one game at a time.

“Great teams are able to overcome adversity,” Bloomgren said. “That’s what championship teams [and] bowl teams do, they find a freaking way. That’s what we’re talking about right now: [We need to] get to Monday, find out who’s going to be able to play next week, and find out how to win that game and go 1-0 next week. Then we’ll do the same thing [again].”

The Owls will host Texas Southern at home this Saturday at 5:30 p.m.