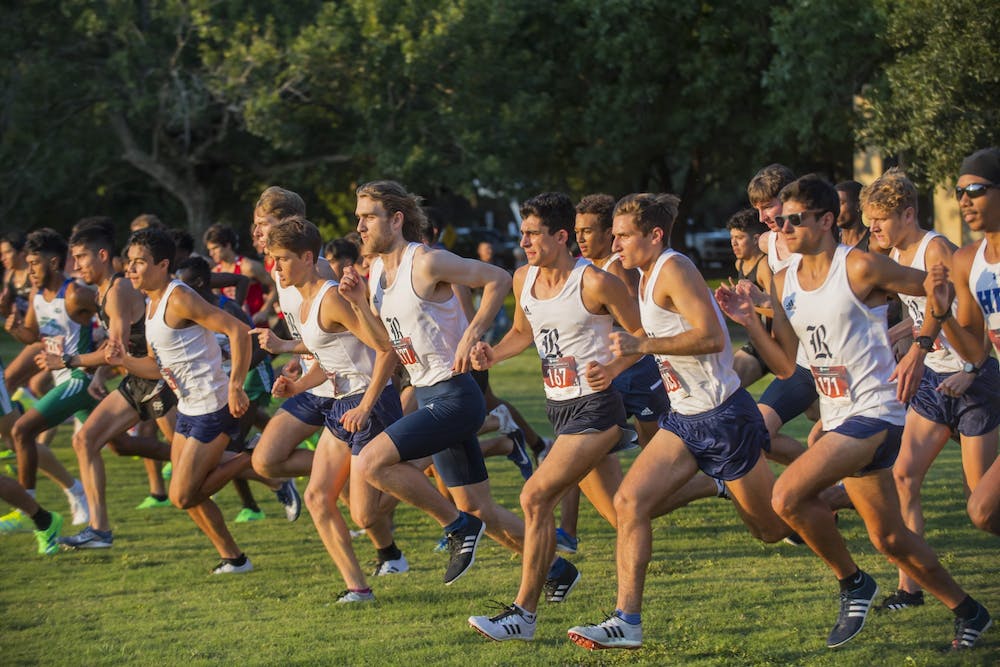 Both the Rice men’s and the women’s cross country teams impressed this past Saturday morning at the Texas A&M Invitational in College Station, Texas. The women’s team placed second overall at the meet, placing 26 points behind the hosts. For the second straight meet, sophomore Grace Forbes won the individual title as she beat the next collegiate runner by over 30 seconds in the 5k race.

Sophomore Caitlin Wosika came in No. 7, her second top-10 finish of the season, and was joined by senior Lourdes Vivas de Lorenzi (No. 11) and sophomore Taigen Hunter-Galvan (No. 14) to round out the top-15.

Women’s head coach Jim Bevan said he was proud of his team’s performance over the weekend and expects the team to only get better.

“We ran much better in College Station than at the Rice Invitational,” Bevan said. “We are improving week by week. With the addition of Taigen and Alyssa, we continue to close the gap. Grace ran outstanding and Caitlin, Lourdes, [sophomore] Rachel Shoemaker, and [freshman] Haley Allen keep getting better. I’m excited for our future.”

The men’s team also had a strong showing, as they finished third on Saturday. The Owls finished 18 points behind Texas A&M University, who placed 19 points behind the first-place University of North Texas.

Men’s head coach Jon Warren was proud of his team’s performance on Saturday and believes that the performance at the meet was something that the team could build upon.

“The team ran great,” Warren said. “In fact, it was the fastest race ever for almost everyone. We are moving in the right direction.  This is still very early in terms of both racing and training. This group will get better as the season progresses.”

Five of the Owls’ runners placed in the top 20 with the effort led by senior Hociel Landa who placed No. 5 overall. Sophomore Travis Dowd finished No. 11 overall and senior Alex Topini followed with a No. 12 place finish. Dowd said that this weekend’s meet gave the team a chance to test themselves against tough competition.

“While I was happy with my finishing time and fitness, it is clear that I need to step up in order for our team to be able to beat A&M and North Texas when it counts,” Dowd said. “This meet was helpful in lighting that fire under me, because it gave me a chance to see just how good our competition is. I think much of our team feels the same way, and we will be ready come November.”

Next up for the men’s team is the Florida State University Pre-Nationals Meet on Oct. 15 and the C-USA Championship on Oct. 30. Meanwhile, the women’s team has a busy fall schedule, including a competition at Lehigh University, before heading to Florida State. Strong performances by the Owls at these meets could mean a chance for the runners to compete at the national tournament.

Forbes said she is optimistic about the rest of her team’s season and believes that they can keep improving in their next few meets.

“This week’s performance was a really great indicator for our performances ahead,” Forbes said. “We are continuing to greatly improve as the weeks go on, and I’m so excited to see what we can put together as a team at the conference championship.”

Warren said that the next couple of weeks will be critical in the men’s team’s training as they enter the most important part of their schedule.

“We have two weeks to just train,” Warren said. “These weeks will be vital to get ready for both FSU and the championship races that follow.”

Dowd mentioned that the team is not satisfied with their strong performance of the weekend and is motivated to work harder and perform even better at the rest of the meets in the season.

“We all raced well this weekend with many of us [achieving personal records], but we are not content with that,” Dowd said. “Our third-place finish will definitely serve as great motivation for us in the coming training weeks that will be crucial for our pre-nats and conference races that will determine whether we make it to nationals.”