Black Art at Rice: A Conversation with Chavonté Wright 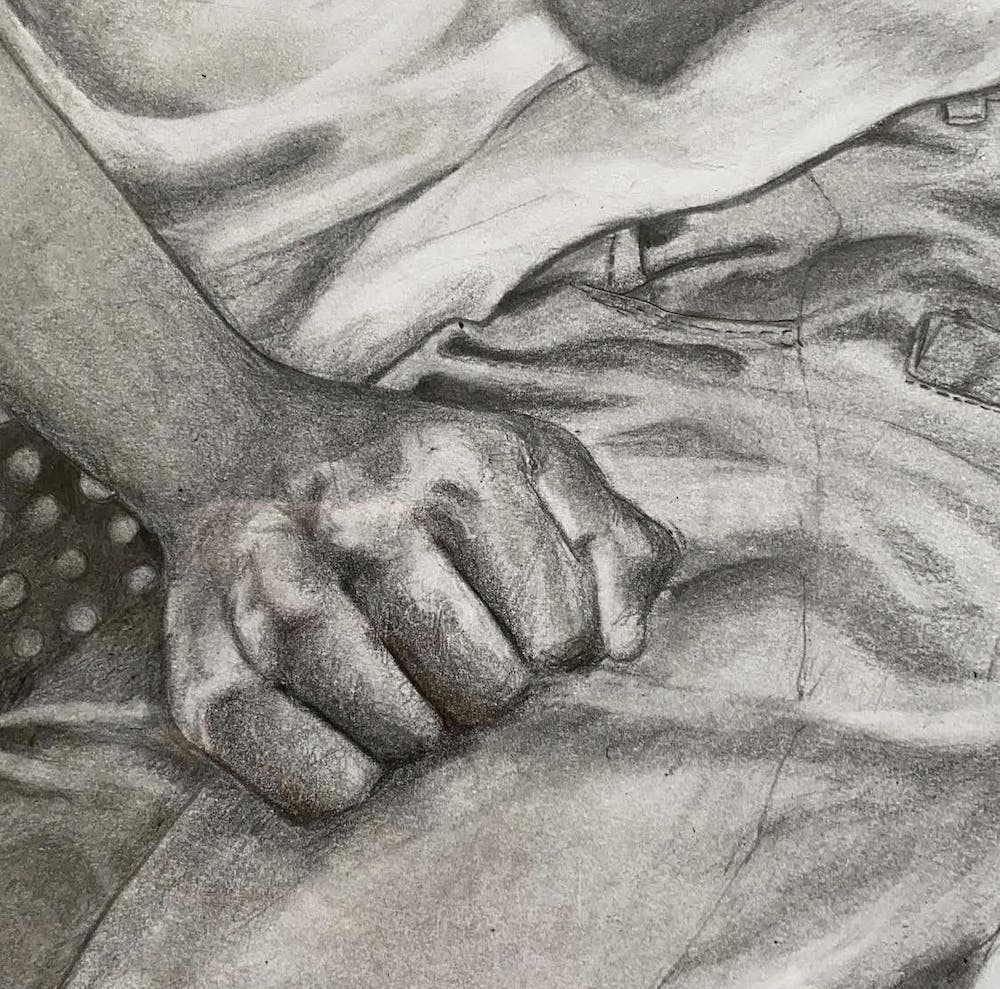 Editor’s note: This is an installment of Black Art at Rice, a Q&A series that aims to shed light on the inspirations, influences, wisdom and work of Black artists in the Rice community. Have someone in mind whose art should be spotlighted? Nominate them online.

Chavonté Wright (Martel College ’16) works primarily in graphite and charcoal and draws from her personal experiences to depict realms ranging from Black literary figures to scenes reminiscent of her childhood as a native Houstonian. She reflects on how the Black experience inspires her work, particularly in the spaces within joy and suffering. Currently, Wright is a Ph.D. student studying sociology at Indiana University, and readers can explore more of her art at chavonte.com and @musemedit on Instagram.

Rice Thresher: When did you get into art?

Chavonté Wright: I started drawing seriously, if that can be said, in high school. I took an art class and I was like, “Okay, this is cool. I’m comfortable with graphite.” As a high schooler from Houston, I entered some work into [the Texas rodeo] and got a finalist award for this picture of spurs that I drew with graphite. From there I was like, “Okay, this is something that I really enjoy doing and working with.” I liked messing with the different shades, and so I took one art class at Rice … I enjoyed drawing there but ended up focusing on sociology.

RT: What was your time at Rice like, and how have your studies in sociology influenced your experiences with art?

CW: I got into sociology at Rice because of my experiences in high school. I was the first in my high school to get into Rice, and that’s not because my friends aren’t smart. We had a new high school built, and they zoned all the students in apartment complexes below [a certain] income to that one school. We had metal detectors at the door. It was a different experience than I would see at the other high schools in the district that were less racially diverse and less socioeconomically disenfranchised.

Once I got to Rice … I sat in on a sociology course, and it was the only place where people were talking about the things that I experienced. I became interested in education and inequality and race and gender and ethnicity. That has shown up in my work more recently with my focus on Black literary figures and Black children and with them dancing — which is an expression of joy and not them having to grow up too fast, by way of protesting or knowing realities of the world that they live in that force them to be vigilant in ways that children I don’t think should have to be, so soon.

RT: What inspires you in your art?

CW: I guess I’m inspired by things that I find interesting or beautiful. As I’ve gotten older, I’ve also drawn boyfriends because, you know, I find them beautiful at some point.

But when you do that and you give that away, they don’t always appreciate that. I had to grow up and I did a self-portrait — love yourself — and from there became more interested in capturing Black figures and whatever inspired me, which ended up being Toni Morrison, someone asking me to draw James Baldwin and Black children.

RT: What are your thoughts on Black representation in art?

CW: I think in my life I have been very much affected by mass media as a tool to raise awareness in the images of brutalized, dead or dying Black people in videos. It has shaped who I am to an extent, just in how I think about the world. When I think about Black representation in art, I think as an artist, we have an opportunity to do several things: We can raise awareness to violence and brutal things that happen, which I think is important and to some extent has helped us a bit. We can call attention or put on display moments of joy or happiness, and I think that has a place in achieving something.

Personally, after going through a phase of sharing all of those images and posting all of these traumatic things that I think we should respond to, I’ve gotten to a place now where I’m interested in capturing the beauty or joy of the beautiful or joyful moments that Black people have, or maybe someplace in between. It’s like when you dance, sometimes you might make an ugly face because you’re really getting into it.

I think that’s part of the tension of being Black and being alive. It’s a joyful experience. But the only reason why we know joy is because we know suffering so well, and that’s part of the human experience for everyone. Sometimes you dance just to survive. I remember being at Rice and those times being so stressful, but that’s kind of part of it. It’s that tension between joy and sorrow that we, the artists, can put on display for people to see.

RT: What has your art journey been like, from high school until now?

CW: I took a break for a long time because I was so focused on academics. I was a teacher for a year and went to Indiana for graduate school. Bloomington was not diverse. I really missed being around Black kids and a lot of Black people … There, I found myself with a lot of time to myself, and with that, I tried to get back into drawing.

I did a self-portrait, and then I drew Toni Morrison after she passed away, who was a Black literary figure, and got into some art stuff with some graduate students who were doing art history. Once I moved back home in the middle of the pandemic, I saw that George Floyd was from Houston and him being in the Midwest and going through what he went through, I felt kind of the same way — I was like, “This is not the South.”

I came back and immediately started drawing these pictures of Black kids that I found in a protest book by [a Black photographer] Devin Allen. It was a book full of images of protests and people in the city of Baltimore. I just found one picture of children dancing, and so I started drawing that. That’s what I’ve been working on.

RT: What is your favorite project you’ve done and why?

CW: So far it’s the project with the Black children. They’re on a stage and there’s a bunch of them, but there’s four of them in the front and they’re all doing different moves. One’s kicking, one’s dabbing, one is doing some other move and they’re all together moving in unison, but they’re not looking at each other, you know? You don’t have to look at each other to be in formation and move to the same beat in these moments. It’s this moment of collective joy, but everyone is in their own world.