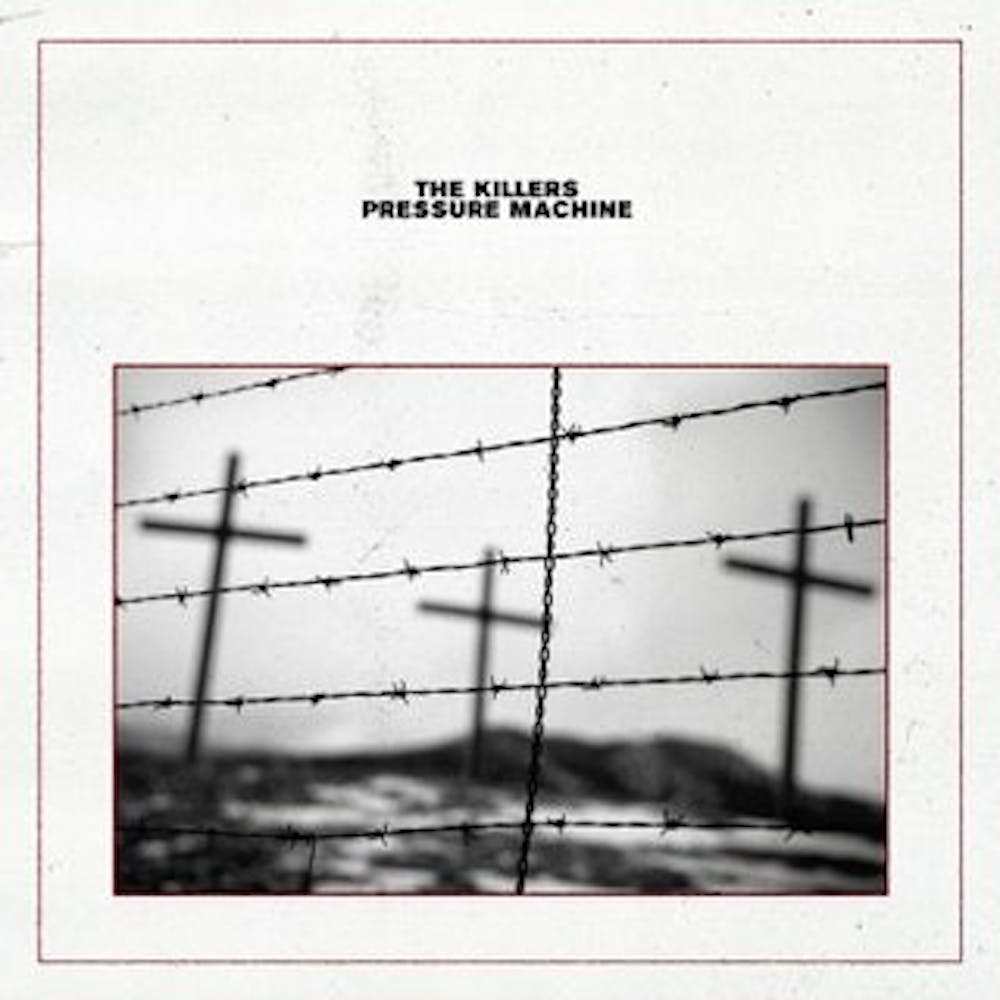 Likely most well known for their first two albums, “Hot Fuss” and “Sam’s Town” which include hits like “Mr. Brightside” and “When You Were Young,” the Killers had been staying in roughly the same lane until attempting to rebrand themselves with the high energy, almost delirious “Imploding the Mirage” last August.

As their second album in a little less than a year, it is hard not to view the Killers’ seventh studio album “Pressure Machine” as a continuation of the work they did on “Imploding the Mirage.” However, this is not the case. In fact, “Pressure Machine” is almost but not quite the antithesis of the Killers’ previous album. The high energy pop-rock sound is still present in places, but they move towards a more grounded sound that seems even more heavily influenced by Springsteen style country-rock than the band’s early work was with a Springsteen feature in “Dustland.”

“Pressure Machine” takes the listener on a journey through small town America through the eyes of the people who live there. Each song gives us a vignette painted with a level of detail that makes it clear that lead singer and keyboardist Brandon Flowers has placed more focus than usual on the song’s lyrics. While this means that the album requires more active listening than the Killers often do, it is effective in portraying the town of Nephi, Utah, where the band’s frontman grew up.

Another facet of “Pressure Machine” that sets it apart is the interview audio clips placed at the beginning of most tracks on the album. Hearing the voices of people like those described in the songs talking about their towns lends the vignettes a level of credibility that they would not have otherwise had.

Over the course of the album, Flowers paints a tragic picture. He describes the many problems of small-town life from the intolerance implied in the audio clips before “West Hills” (“if you don’t fit their mold…”), to the effects of the opioid crisis (which appear throughout the album beginning with “Quiet Town”), to kids who feel trapped by the place they grew up in and the hopelessness that arises from “waiting for a miracle to come” as in “Cody.” Simultaneously, though, Flowers emphasizes how good many residents feel their communities are both through the songs and the audio prefaces to them: “Families are tight / Good people, they still don’t deadbolt their doors at night,” “good place to live … we’ll be here forever.”

Frustratingly, but likely intentionally, Flowers makes no attempt to provide any sort of catharsis or resolution to these two contradicting narratives. He provides a score of problems but seems to be unable to identify any of their sources. At times, his depiction almost seems naive. In “Pressure Machine,” poverty, depression and drug abuse just exist as a feature of rural America with no signs of ever changing. It is hard to imagine this is the same band that, fifteen years ago, released an album as critical and disdainful of this same environment as “Sam’s Town” was. Perhaps Flowers has simply aged out of this mindset over time, but the dissonance between these two narratives frustrates listeners.

Aside from this, “Pressure Machine” is a very good addition to the Killers’ portfolio. The more introspective lyrics work really well with the more country-rock instrumentals, especially in the album’s title song, and when the band does return to their standard pop rock formula, as they do with “In The Car Outside” it provides an interesting contrast with the rest of the album. In addition, while some of the more narrative driven songs like “Desperate Things,” in which a cop murders the abusive husband of his girlfriend, come off a little bit forced, especially the tone change in the last two minutes of the song, it seems like a very promising route for Flowers to continue pursuing in the future.

While no particular song stood above the others to me, this was more an effect of the album being consistently good than it was the album lacking strong songs. If I had to pick a favorite however, it would likely be “Cody” which feels closer to R.E.M.-style classic rock than the rest of the album, which causes it to pull focus from the surrounding tracks. On the other hand, my least favorite track is probably the opening song “West Hills.” On first listen, when expecting “Pressure Machine” to be more like “Imploding the Mirage,” it was interesting simply because it was surprising. However on subsequent listening, the lyrics seem like they are lagging behind the instrumental in an unsettling way that does not really fall in with the rest of the album. It perhaps would have worked if the song had not also maintained that speed for its entire almost six minute duration. Ultimately though, “Pressure Machine” takes a rather surprising direction from the Killers’ rebranding less than a year ago, reminding listeners that they still have a lot of versatility left to explore.

“Pressure Machine” is available for purchase and to stream through all major platforms.