Owls in the Olympics 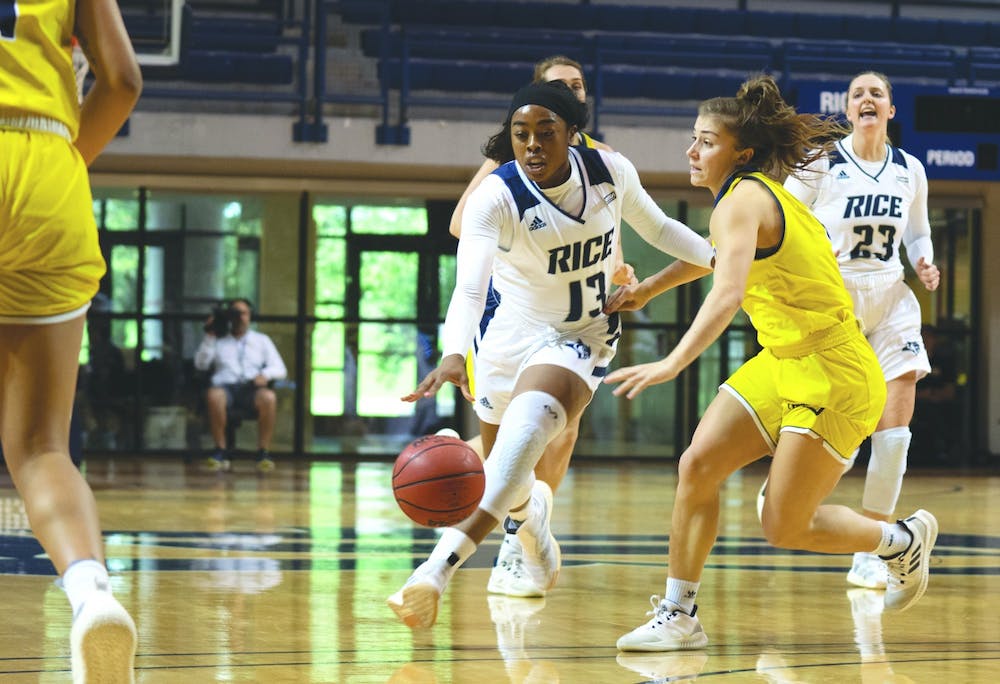 Many people might think that in order to become an Olympian, one must dedicate every ounce of time and energy to sport. While reaching an elite level requires sacrifices, two Owl alumnae are shining examples that athletes can reach the Olympic level while excelling in outside pursuits.

Two Rice graduates, Erica Ogwumike and Ariana Ince, competed at the highest level in their respective sports at the Tokyo 2020 Olympic Games this summer. Ogwumike, a decorated member of the Rice women’s basketball program from 2017-20, was selected to compete in Tokyo with the Nigerian basketball team. Although she was born in Texas, Ogwumike was eligible to compete for Nigeria since her parents are natives of the country. Ince, a track and field alumna who graduated from Rice in 2011, represented Team USA in the javelin throw.

Ogwumike and Nigeria were unable to advance out of their bracket, going 0-3 in a challenging group made up of the United States, France, and Japan. Ogwumike contributed three rebounds and three assists across 15 minutes, but didn’t manage to get on the scoreboard. Ince finished 15th in Group B with a throw of 54.98m. While these may not be the results either Owl hoped for, they both felt proud to make Olympic rosters while balancing their work off the court or track.

Ogwumike attends University of Texas Southwestern Medical School in Dallas, and in only her first summer as a medical student, she embraced the challenge of managing multiple research projects while participating in the Tokyo Games.

This busy schedule is nothing new to Ogwumike, who was drafted by the Minnesota Lynx of the WNBA before starting at UT Southwestern. Her entire first year of medical school was spent hustling off of the court after workouts to attend lectures, studying in any downtime she had between meetings and training sessions, preparing and watching lecture videos in advance or even leaving practices early to attend classes.

Ogwumike documents her experiences on her YouTube channel, capturing her hard work and tightly packed schedule as she manages school and sport while preparing for and traveling to Tokyo. According to Ogwumike, her dedication paid off when she was able to realize her goal of being both a medical student and an Olympian.

“I am shocked, I am stunned that I am a freaking Olympian,” Ogwumike said in a video posted to her YouTube channel. “It’s just surreal to know that when you have a plan, you work at it, it can work out.”

According to Ogwumike, she hopes her Olympic experience will serve as proof that it’s possible to do multiple pursuits at a high level.

“I hope to be a small symbol of representation for those who have multiple passions,” Ogwumike said in the same video. “It is possible.”

It seems only fitting that Ogwumike returned from the Games with only a few days to spare before jumping right back into her second year of medical school classes.

Ince is another example that pursuing multiple passions at elite levels is possible. She is the current owner of m-erg, an ergonomic consulting firm based in Houston. Additionally, she works 40 hour weeks for California’s State Compensation Insurance Fund. When asked how she manages her own business, works as an ergonomist for the state of California, and maintains her training routine, Ince said that, going back to her days at Rice, she has always thrived when she is busy.

“I do better when I am a little bit busier,” Ince said.  “I have always operated like that. I played six sports in high school. I have always done maybe too much, but it is what I am comfortable doing. At Rice, I was an engineering major. I was an O-Week Coordinator. I was on the track team. I was active in my college. It is what I have always done. I think Rice [was] a good test run of doing that in the real world as well.”

“I spent a lot of time focusing on technique stuff,” Ince said.“There would be moments in the village where I’m like, ‘Wow, I’m at the Olympics, this is crazy’. But most of the time, I was just focusing on what I was trying to do. I was just kind of living in the moment. I’m not the type of person who takes a bunch of photos, so I was just walking around, talking to people, enjoying the experience, and now I have I think three photos from the Games.”

As for her next step, hopefully Ince can add to that photo collection at the next Olympics in Paris in 2024. According to Ince, her ultimate goal is to train through 2025, before transitioning away from her track and field career.

Although the two donned different nations’ colors, performed in different sports, and inevitably have unique stories, their journeys to the Olympics and their experiences once there exhibit the similarity of being able to manage work and sport. According to Ince, Rice was integral in helping her to develop that balance.

“Rice did a really good job of not making everything about athletics all about athletics,” Ince said. “You are a student athlete, you have so much other stuff going on all at the same time that it allows you to be a well rounded person and also be a really good athlete. Right now, I am in a really unique position where I am working full time, I own a business, and I get to be an Olympic athlete. I have this huge safety net below me whenever sport does go away and Rice was very integral in creating that. It helped me to not place all of my identity in sport and has made me a very well-rounded person.”