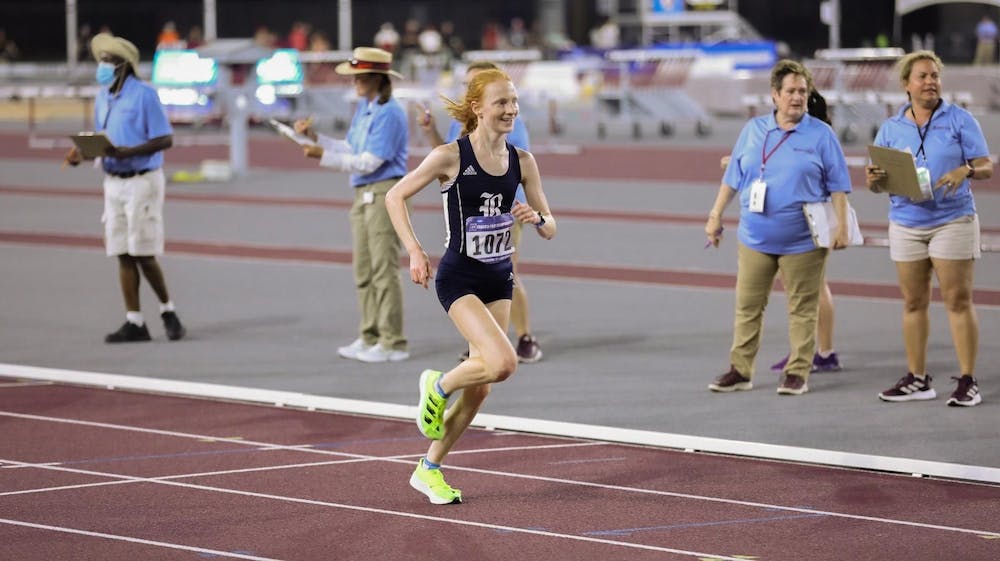 According to women’s head coach Jim Bevan, it was a joy to watch his qualifiers perform against top-tier competitors at the challenging meet.

“We took six competitors to the meet and it was great to watch them compete against the best in the western half of the country,” Bevan said. “The meet is very intense and is very difficult to qualify for.”

On the women’s side of the meet, six Owls competed in six events, all needing a top 12 finish in their respective event to qualify for the NCAA Championships. Thursday, which was the first day for the women, started with a bang. Sophomore thrower Tara Simpson-Sullivan, who set a meet record in the women’s hammer throw at the C-USA Championships, secured her spot in the NCAA Championships with a throw of 64.87 meters that earned her sixth place. According to Simpson-Sullivan, she had to overcome some uncharacteristic nerves in order to qualify.

“Having just come off a win at conference coupled with a great training week leading up to regionals, I was fairly confident,” Simpson-Sullivan said. “However, I did have some nerves going into prelims as it was the biggest collegiate competition all year, and all field events only got three throws to qualify, which isn't what I'm used to. I feel that I competed well, especially when it mattered, managing to move myself into a qualifying position on my final throw.”

Following Simpson-Sullivan’s qualification, senior jumper Michelle Fokam was unable to place in the women’s long jump as she accrued a foul on all three of her jumps. Junior thrower Erna Gunnarsdottir just missed out on a qualifying spot to Eugene as her 16.57-meter throw in the women’s shot put awarded her 13th place, missing the cut by less than a tenth of a meter. But in the last event of the day, sophomore distance runner Grace Forbes, fresh off her first-place and record-breaking time at the C-USA Championships in the 10,000 meter, continued her dominant season, easily qualifying for the NCAA Championships by once again taking home first place in the women’s 10,000M with a time of 33:28.47. According to Forbes, the result was a surprise since she went into the race with her mind set only on getting a qualifying spot.

“The game plan heading into regionals was simply to qualify,” Forbes said. “I was planning on picking the first place runner and following them for the majority of the race and settling down once the pack narrowed from the initial 48 runners to 12 runners. I was not really anticipating the race going as it did [as] I led almost the entire race, and I made a last push with 150 meters to go to get the win.”

The women next competed on day four of the meet, which featured three Owls competing in two events. After redshirt junior thrower Julie Perez competed in the women’s discus, placing 40th, Fokam and senior jumper Maryam Hassan both competed in the women’s triple jump. Hassan finished in 38th place with her jump of 12.16 meters. Fokam’s first two jumps were ruled as fouls. This meant Fokam was down to her final jump to qualify, but it just so happened that she saved her best for last as her final jump of 13.58 meters earned her fifth place and a ticket to her third appearance at the NCAA Championships.

“I told myself that my season as a collegiate athlete will not be over and I can and will keep it alive,” Fokam said. “As I stepped up to the runway, my last thought before I started running was, 'last one best one.' Being my last attempt, I wanted to make it the best [and] I always use this saying to motivate myself to do the best and execute for my last reps.”

The men’s team brought six of its members to College Station to compete in five events in hopes of qualifying for the NCAA Championships. Day one of the meet opened with three of the men’s team members competing in the first two events of the day. Redshirt junior thrower James McNaney solidified his spot for the NCAA Championships as his first throw of 66.90 meters earned him sixth place in the men’s javelin. According to head coach Jon Warren, McNaney, who first joined the Owls as a pole vaulter, was the standout performer at the NCAA West Prelims.

“As most championships go, [this weekend was] a mix of up and down,” Warren said. “The up, obviously, was James McNaney advancing to the NCAA Finals. His story of going from pole vaulter to NCAA finals qualifying javelin thrower is a great one. I am excited to see what he can do in the outstanding environment that is Hayward Field.”

Aside from McNaney, no Owls approached a qualifying spot that day, with junior thrower Nick Hicks and freshman thrower Shaun Kerry placing 30th and 38th respectively, in the men’s hammer throw.

Hicks got closer to a qualifying spot on day three of the meet, the second day for the men, when he placed 17th in the discus throw, with a distance of 55.32 meters. Sophomore thrower Samuel Woodley was not far behind in 22nd place. Freshman jumper Ese Amata’s 39th place finish in the men’s high jump rounded out the day for Rice.

In the men’s 3,000 meter steeplechase, which had been postponed to day four due to inclement weather, senior Hociel Landa managed a 21st place finish while redshirt junior Andrew Abikhaled finished 12 spots behind him in 33rd, closing out another day where no Owls qualified for Eugene. Following the meet, Warren said he was happy with the experience his squad gained during the meet.

“The most exciting part, to me, is the realization that every member of our squad that went to the West Prelims will be returning,” Warren said. “This was a great growing experience for the throwers, Nick, Sam, [and] Shaun, Ese in the high jump and the steeplers Hociel and Andrew. I know we can get quite a few more qualifiers next year with the hope of getting even more through to the NCAA finals.”

The four qualifiers will continue their seasons as they gear up for the NCAA Championships in Eugene. McNaney will compete on June 9, Simpson-Sullivan and Forbes on June 10 and Fokam on June 12. According to Forbes, while she is happy with her performance in College Station, she is still hungry to achieve more.

“It is awesome to qualify for nationals, but I am by no means complacent,” Forbes said. “The most important race of my life lies ahead, and yes, qualifying for the race is great, but performing well when it truly matters is going to be the real test for me. I hope I am able to represent Rice well and put my best self out on Hayward Field next Thursday.”