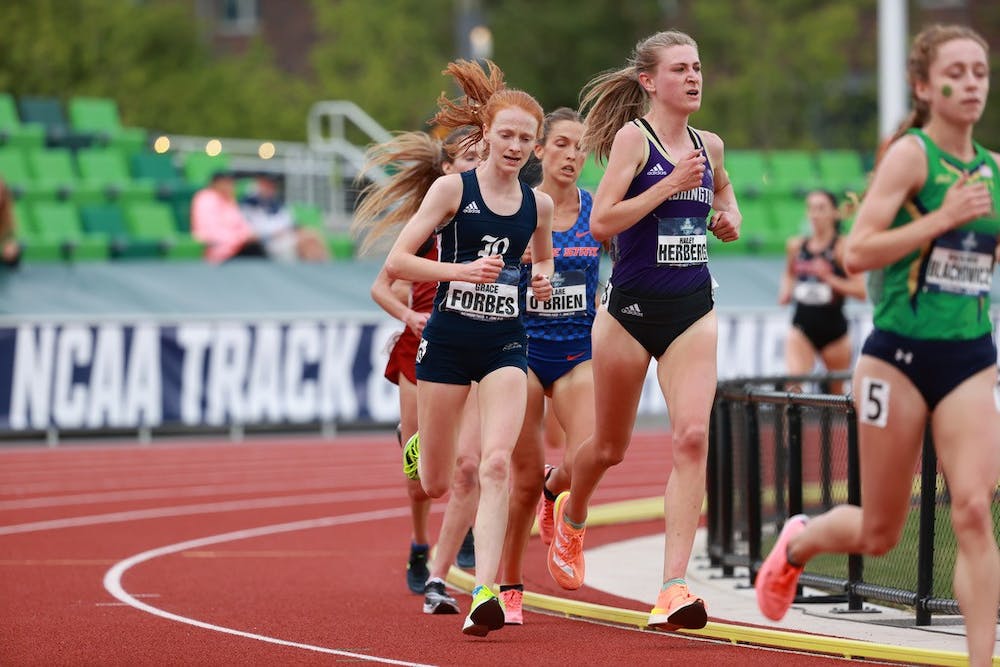 Rice Women’s Track and Field saw three athletes finish in the top ten of their respective events at the NCAA Championships, held earlier this month in Eugene, Oregon. Senior long jumper Michelle Fokam, freshman thrower Tara Simpson-Sullivan, and freshman distance runner Grace Forbes put together the best performance from women’s track and field at a national competition in 20 years. Women’s head coach Jim Bevan was proud of his team’s scores and placements against the best competition in Division I.

“We had a truly outstanding meet,” Bevan said. “Just to score is quite an accomplishment, and to have three score and score well is a tremendous achievement.”

“This meet was a great meet for me not only for my final placing at fourth but in terms of being back on an upward trend and the consistency in my throws,” Simpson-Sullivan said. “Going into my final throw something that my Coach always says to us entered my mind: leave it all out there in the ring. So that is what I thought to myself, last throw best throw. I knew what I needed to do, it just had to be executed well.”

Following Simpson-Sullivan, teammate Grace Forbes competed in the women’s 10K Thursday evening. Forbes carried momentum into this race after placing first in her last two meets, the C-USA Championships and the NCAA West Prelims. However, while Forbes did not continue her streak of No. 1 finishes, she maintained a top-three position for most of the race before falling off at the end of the race and ultimately coming in No. 7 with a time of 32:38.91. According to Forbes, she was unable to fulfill her game plan due to energy constraints.

“My goal was to stay with the leader and push the last one or two miles,” Forbes said. “That didn’t really happen as I just didn’t have enough energy in the tank to hold on with the leaders. I am proud that I was able to finish the race and secure an all-American finish despite feeling so tired. I actually lost my vision in the last 50 meters of the race because I was so exhausted.”

Senior jumper Michelle Fokam, making her third appearance at the NCAA Championships, rounded out the women’s team lineup on Saturday evening as she competed in the triple jump. Entering the meet, Fokam’s school-record jump for the triple jump was 13.60 meters. Five of her six jumps at the competition surpassed her previous record, and in particular her personal-best third jump of 14.04 meters earned Fokam a bronze medal. According to Fokam, even though she has competed at the NCAA Championships before, she still approached it as any other meet, and in the end, was proud of her final performance as a Rice Owl.

“I have been here before so I know what to expect and I have been able to witness what it takes to be great at that level while at other championships,” Fokam said. “However, I tried to look at this meet as just another track meet. I’m extremely proud of my performance. It warms my heart to know I put my best out on my final meet and left with the best outcome. I am happy to have represented Rice so well in my final competition as an Owl.”

“It is the first time in a long time for us to have three different people score at the national meet,” Bevan said. “It speaks volumes about what they have done. There were probably less than 20 schools in the country with three different people scoring. When you consider that the NCAA meet is a global meet with representatives from over 100 countries, it is a great accomplishment. It is truly the best in the world in the sport for under the age of 23. All three have improved tremendously in their career at Rice.”

Rice Men’s Track and Field also sent one of their own to Eugene. The lone Owl was former pole vaulter-turned-javelin thrower senior James McNaney, who made his first appearance at the NCAA Championships. McNaney entered the competition following a No. 2 finish at the C-USA Championships with a personal-best throw of 71.41 meters and a No. 6 finish at the NCAA West Prelims with a throw of 66.90 meters. However, McNaney did not find the same success at the NCAA Championships, as his third throw of 63.96 meters earned him No. 20. Men’s head coach Jon Warren has raved about McNaney’s performances all year, and now he can’t wait to watch McNaney for an extra season.

“James’ story from vaulter to javelin thrower is a great one,” Warren said. “And, unlike originally planned, it is not quite over yet. The original plan, and the plan for a very long time, was for 2021 to be his final year. But, as often happens, plans change. And COVID has allowed for an additional year of eligibility. So, the new plan is that James will now be back for one more season. I am very much looking forward to seeing where this next chapter in James’ story goes.”

The meet marked the end of the Owls’ outdoor track and field season. However, Fokam and Forbes will continue competing, their next stop is at the U.S. Olympic Trials. On June 18, Fokam finished fourth in the triple jump, earning herself a spot in the final round at the Trials; the top three finishers will represent the U.S. in Tokyo later this summer. Fokam will also compete in the long jump on June 24, and Forbes will run in the 10K meter race on June 26. Simpson-Sullivan will also compete for an Olympic bid, for Great Britain, in the hammer throw at the British Championships on June 26.