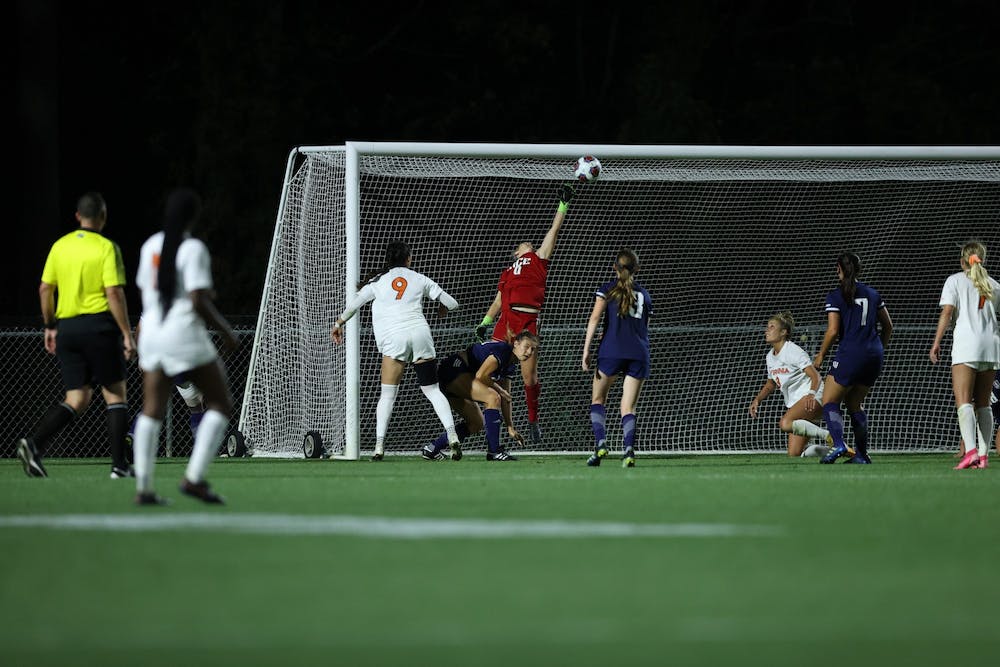 “I am happy for the players, our administration and everyone involved with the program,” Lee said. “UVA were excellent and [are] one of the very best teams in the country.”

After the game’s start was delayed by over an hour due to inclement weather, the Owls and Cavaliers battled it out under the lights for a spot in the Elite Eight. Like their matchup against No. 5 WVU, the Owls got off to a slow start as UVA opened the game as the more aggressive and attacking team. The Cavaliers dominated possession and relentlessly attacked the Owls’ defense. With limited possession, Rice struggled to continue their buildup play into the opposing side’s half, leading to minimal scoring chances for the Owls. Fortunately, the Owls’ defense continued their recent string of good performances as they denied countless scoring opportunities for the Cavaliers’ offense early on in the match. However, UVA continued to test Rice’s backline. They would eventually have their breakthrough late in the first half.

With less than ten minutes to go in the half, the Cavaliers’ offense patiently kept possession in the Owls’ defensive third of the pitch, eventually finding sophomore forward Diana Ordonez around the middle edge of the box. Ordonez used her first touch to spin away from Rice’s senior defender Mijke Roelfsema, putting her in position for a potential shot on goal. Roelfsema attempted to prevent the goalscoring opportunity, but made contact with Ordonez instead, bringing her down in the box, giving a penalty to the Cavaliers. Ordonez stepped up to the penalty spot and struck her shot to the left side of the goal past the outstretched arms of junior goalkeeper Bella Killgore. The Cavaliers would take their 1-0 lead into the break. Despite conceding first, Lee was proud of the way his team defended in the match.

“Their front three [were]a handful,” Lee said. “That said, I thought our team defending was excellent, and we were a little unlucky on the penalty late [in the] first half.”

The second half saw much of the same storyline as the first. UVA continued their high defensive pressure, making it difficult for the Owls to retain possession and find attacking space to create chances for their offense. The Cavaliers looked to double their lead on offense, continuously applying pressure on the Owls’ defense. In the 68th minute, the Cavaliers swung in a corner and found Ordonez, who made a run into the middle of the six-yard box. Ordonez’s header ricocheted off the underside of the crossbar and into the back of the net for her brace (second goal of the match).

UVA and Ordonez continued to cause problems for Rice’s defense late in the second half. After her teammate’s header hit the crossbar and bounced back into play, Ordonez connected on the rebound with her own header. This time, the Cavaliers’ offense would not be denied, as Ordonez completed her hat trick with another header in the 82nd minute. This was the dagger for the Owls, as they would not be able to mount a comeback with less than ten minutes to go in the match. The Cavaliers’ attacking prowess proved to be too much for the Owls as they created just 16 shots to Rice’s two. The Cavaliers now move on to the quarterfinals, where they will face No. 4 Texas Christian University. Despite the loss, Lee recognizes the collective effort and defensive brilliance that allowed the Owls to make their tournament run and grow as a team this year.

“It was a group effort, and so many people played a part in a wonderful run,” Lee said. “[This was] a season of tremendous growth and an outstanding last 10-12 games buoyed by brilliant team defending.”

With the loss, the Owls finished their season with a 14-3-1 record. Rice’s season full of accolades saw the Owls win the Conference USA title, earn a top 25 national ranking and win the program’s first-ever matches in the NCAA tournament. The Owls will look to build off of this momentum with a majority of the squad set to come back as the team gears up for next season.

“Every season is a new team,” Lee said. “When we reconvene in August, we will assess and go from there, but we are excited to return almost everyone and add some outstanding prospects to the squad.”