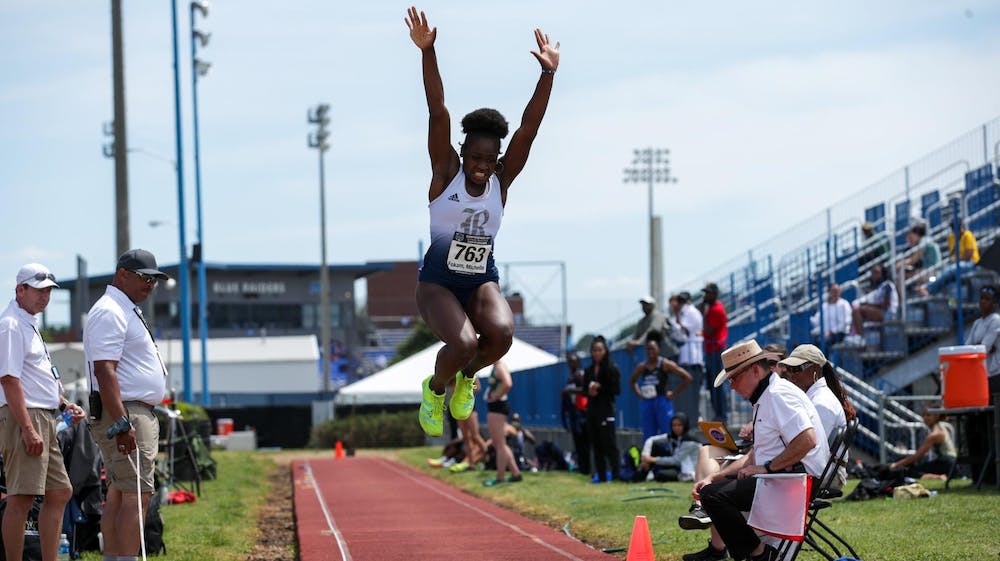 The Rice women’s and men’s track and field teams traveled to Murfreesboro, Tennessee to compete in the C-USA Outdoor Track and Field Championship from May 13-16. The No. 14 women’s team impressed throughout the event, taking second place out of 13 teams and winning seven individual events. Meanwhile, the men’s team placed fifth out of ten teams, winning one individual event. This was the last meet of the outdoor season for both Owl teams, but qualifiers will move on to the NCAA West Preliminary Championships that begin on May 26 for the men and May 27 for the women in College Station.

Women’s head coach Jim Bevan said he was beyond proud of the team’s efforts that earned the Owls 121.5 team points.

“We had a tremendous meet,” Bevan said. “We scored more points than we have scored since 2009, and more points than we were [projected] to score going into the meet. We had a number of season bests and personal bests throughout the meet. Our team really performed at their highest level of the year when it counted the most.”

After a quiet first day, the women’s team got off to a fast start on the meet’s second day as sophomore thrower Tara Simpson-Sullivan placed first in the women’s hammer throw with a C-USA Championship-record throw of 66.01 meters. Redshirt junior thrower Julie Perez joined Simpson-Sullivan on the podium with a 55.80 meter throw that earned her third place. The Owls closed the day emphatically as sophomore distance runner Grace Forbes continued her strong season by winning the 10,000 meter with a C-USA Championship-record time of 33:50.06. Forbes said that, with the help of Bevan, she was able to execute her goal for the race.

“The goal was to stay with the front pack until like 800 [meters] to go and then take it away, and I think I executed well, and it went to plan,” Forbes said. “Coach Bevan said to put a little pressure at four laps, which I wasn’t really expecting, but it felt good, so I just went with it.”

The Owls opened day three in similar fashion by winning the day’s first event. Perez finished first in the discus throw with a distance of 49.26 meters. Day three also saw senior jumper Michelle Fokam cap off her decorated Rice career by adding another event victory to her resume, defeating the field of 28 competitors to win the long jump with a distance of 6.47 meters. Following her victory, Fokam was not only happy with her performance but also excited to carry the momentum and confidence from her jumps to her preparation for regionals.

The Owls continued their string of strong starts as day four opened with sophomore thrower Erna Gunnarsdottir taking second in the women’s shot put with a throw of 16.77 meters. Fokam continued to finish her Rice career off with a bang as she placed first in the women’s triple jump with a distance of 13.60 meters. Fokam’s jump was also enough to break Rice’s school record, a 13.57 meter jump from Claudia Haywood in 1993. Forbes continued to add points to Rice’s overall score as she reigned victorious in the women’s 1,500 meter with a C-USA Championship-record time of 4:14.42. But Forbes wasn’t done yet as she convincingly closed day four out for the Owls by winning the women’s 5,000 meter with a time of 16:19.82.

Forbes capped off her dominant season by winning three events and earning 30 points for the Owls, more than any other competitor at the meet. For Forbes, contributing to the team’s score was more important than breaking individual records.

“The whole point of this meet is to score as many points for Rice as possible,” Forbes said. “I’m not going for any PR’s; I’m going to try and be as tactical as possible, conserve as much energy and do the least amount as possible to get the most amount of points. So that's the goal, no PR’s, but good top-placed finishes would be awesome.”

After the points were tallied up, the women’s team took second place with 121.5 points, falling short of Middle Tennessee State University who placed first with 150 points.

On the men’s side of the meet, the Owls managed to hold their own against Conference USA’s stout competition.

The Owls were given a boost to their team points on day two when junior thrower Nick Hicks took first in the men’s hammer with a throw of 62.40 meters. Freshman thrower Shaun Kerry joined Hicks on the medal stand as he took third with a throw of 60.33 meters. According to Hicks, taking gold at one of the most important meets of the season was especially rewarding.

“Winning the hammer means a lot to me,” Hicks said. “[The C-USA Championship] is the meet the team prepares for all season, so being able to perform well enough to win on that day really shows how the preparation pays off. It also gives me confidence for the future to win it a couple more times.”

But Hicks wasn’t done; he followed his victory on day two with a second-place performance in the men’s discus on day three with a personal best distance of 56.69 meters. Considering the strength of the conference’s throwers, men’s head coach Jon Warren was very impressed with Hicks’ performances.

“The throws in C-USA are some of the best in the NCAA, and the Rice throwers rose to the challenge and did great,” Warren said. “If I had to pick an MVP for this championship, it is obviously Nick Hicks. His 18 points earned through stellar, clutch performances is incredibly impressive.”

Day four included a tightly contested competition in the men’s javelin which saw senior thrower James McNaney secure second place with a personal best and Rice’s second-best ever distance of 71.41 meters. The javelin competition was a standout moment in the meet for Warren as it came down to the final throw.

“If I had to pick the exciting performer of the meet, it would have to be James McNaney and his performance in a truly exciting javelin competition,” Warren said. “[McNaney’s] throw was, at the time, a top 20 throw in the NCAA. It took a gargantuan personal best effort from UNT's Zion Hill of over 74 meters on the very last throw of the competition to take the victory.”

At the end of the meet, the men’s team secured 74 points, which earned them fifth place out of the ten competing teams. The University of North Carolina at Charlotte took home the gold with 169 points.

This marked the end of the season for some members of the team, while others will now turn to the NCAA West Preliminary Championships.