Women's track ranked No. 14 after impressive showing at Duckett meet 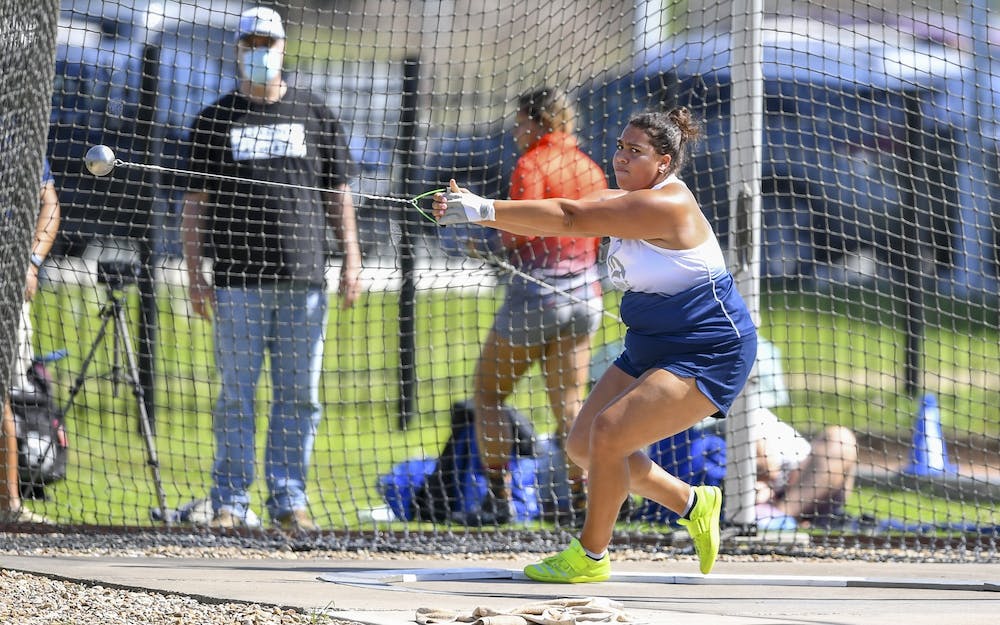 In the final home meet of the year, the Rice women’s track team made sure they left Ley Track with a bang. The Owls racked up two individual school records, 13 top-five competitors and three individual champions. Following the meet, the Owls jumped 15 spots in the latest U. S. Track and Field and Cross Country Coaches Association poll, now ranking No. 14 in the country.

Head coach Jim Bevan said he was ecstatic with the team's performance and their new ranking.

“Due to the performances, we are now ranked No. 14 in the nation,” Bevan said. “I am super proud of this team.”

In the morning field events, the Owls’ throwers, jumpers and vaulters had a strong showing. Freshman thrower Tara Simpson-Sullivan started off the day with a second-place finish in the women’s hammer throw, breaking her own school record for the fifth time this season. Simpson-Sullivan, last week’s Conference USA Field Athlete of the Week, threw 68.91 meters, pushing her to third in NCAA.

Staying in the throws, sophomore Erna Gunnarsdottir won the shot put with a throw of 16.14 meters for her third victory of the season. In the discus, sophomore Julie Perez placed second with a throw of 53.01 meters, followed by freshman Morgan Fey in fifth place.

In the jumps, senior Michelle Fokam dominated the field, winning both the long jump and the triple jump with marks of 6.75 meters and 13.45 meters, respectively. Fokam, who has already qualified for the U.S. Olympic Trials in the triple jump, set a personal record in the long jump that moved her up to fifth in the NCAA. Bevan said Fokam’s performance stood out over the weekend.

“Fokam’s double win in the long jump and triple jump [was a highlight],” Bevan said. “Her big long jump moved her up to fifth in the U.S.”

In the pole vault, all four Owls placed in the top seven with freshman Ali Goodson finishing second with a vault of 3.77 meters. Junior Emily Harrison finished fourth, while freshman Elena Siemens and Audrey Ho tied for seventh.

Before the start of the evening running events, the members of the 2020 C-USA championship team met in the middle of Holloway Field to receive their championship rings. The team led by many of the same athletes competing on Saturday won the meet with a score of 110 points, winning the first indoor conference championship since 2009.

Later in the afternoon, the Owls continued to dominate the running events, putting up multiple personal records and top three finishes. In the sprints, freshman Justice Coutee-McCullum placed third in the 100-meter hurdles with a time of 13.90 seconds, followed at No. 12 by freshman Lindsay Simms with a time of 14.66 seconds.

In the distance events, freshman Grace Forbes continued her strong season by winning the 1,500-meter with a time of 4:14.16, adding to her collection of school records. In her home debut and her first 1,500-meter outdoor race, Forbes moved up to No. 10 in the NCAA this year. Afterwards, Bevan praised Forbes’ performance.

“Forbes winning the 1,500 by a mile and setting a new stadium record was very impressive,” Bevan said.

Multiple Owls ran their way to success in the distance events later that evening. In the 5000-meter, senior Khayla Patel placed third with a time of 17:27.89, followed by junior Lourdes Vivas De Lorenzi and freshman Haley Allen. In the 3,000-meter steeplechase, senior Natalie Goddard ran her way to fourth place with a personal record of 11:09.42, moving her up to third in C-USA. Sophomore Maddie Forbes and senior Lauren Goddard also ran well, placing sixth and fifteenth, respectively.

After the meet, Bevan was thrilled with the team's performance and was proud of the multiple first-place finishers.

“We were so excited about our performances this [past] weekend,” Bevan said.

The women’s track team looks to follow up this performance in College Station this weekend, where they'll compete in the Texas A&M Alumni Muster.