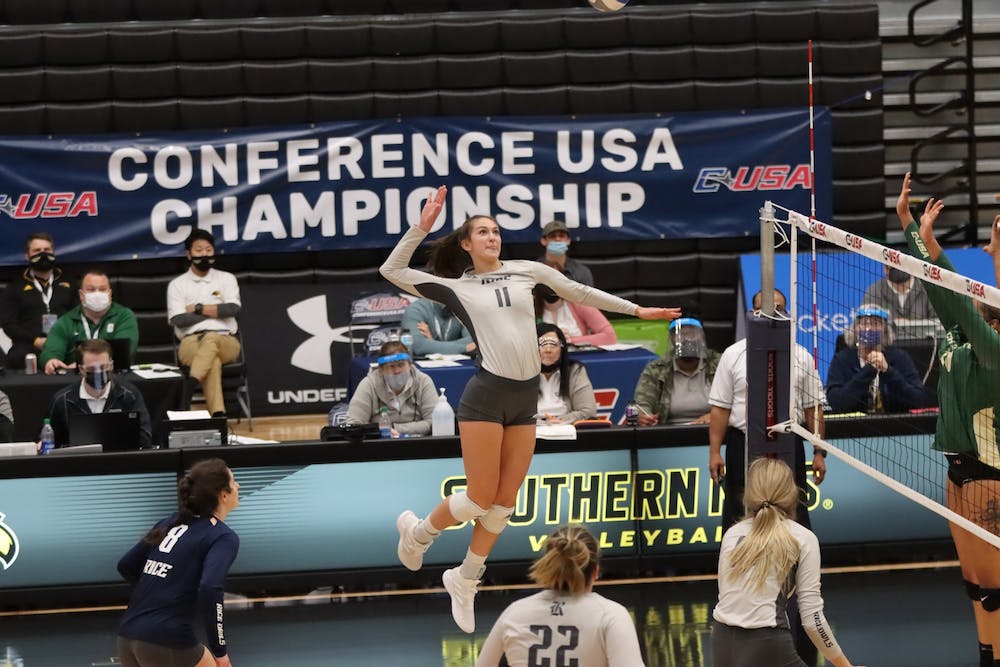 The Rice volleyball team took second place in the Conference USA tournament over the weekend, falling to No. 19 Western Kentucky University in the championship match. Entering the tournament as the No. 1 seed in the C-USA West Division, the Owls got off to a strong start, taking each of their first two matches in straight sets. However, in the final round, they were unable to defeat the Hilltoppers, losing three sets to one. Despite the loss, the No. 24 Owls secured a spot in the NCAA tournament when the field was announced on Sunday.

According to head coach Genny Volpe, the Owls could cause some trouble for their opponents in the tournament.

“What makes us a very challenging team to play against is our depth and our balance of attack,” Volpe said. “We pride ourselves in involving everyone in the offense and defensively outworking our opponent.”

The Owls entered the C-USA tournament fresh off of an undefeated conference season and a road win against No. 2 University of Texas, Austin. The Owls quickly got out of the blocks as they convincingly took down Middle Tennessee State University, relying on their efficient offense and a 0.424 hitting percentage as they closed out the Blue Raiders in three sets.

After their quarterfinal victory, the Owls rolled past the No. 2 seed from the East Division, the University of North Carolina, Charlotte, in the semifinals in straight sets. Head coach Genny Volpe credited the Owls’ offensive efficiency and mindset for the opening round sweeps.

“We were really efficient with our offense,” Volpe said. “We’ve been pretty efficient all year with our offense, but I feel like we took it to another level here. We had our minds set that we weren’t going to look ahead of any opponent. All of our opponents were very quality opponents. [The team] had their foot on the gas and they weren’t going to let go. We got some pressure from both teams that we played prior to the championship, and our composure really carried us through.”

In the championship match, the Owls faced nationally ranked No. 19 and No. 1 seed from the East Division, WKU, a team that has caused fits for the Owls over the past few years. The Owls continued their string of hot starts as they took an early lead. However, a late 6-0 run gave the Hilltoppers the opening set by a score of 25-20. Rice’s offense dictated the pace in the opening set, outpacing WKU in kills 18 to 12, but their eight errors, compared to just two from WKU, spelled doom for the Owls.

The second set displayed junior setter Carly Graham’s versatility as a setter as she facilitated the offense and chipped in key kills to keep the Owls in the contest. WKU’s offense was ignited by last year’s conference player of the year, junior middle hitter Lauren Matthews, as the Hilltoppers contributed a match-high 18 kills on a 0.429 hitting percentage in the second set, allowing WKU to take a slight lead midway through the set. The Hilltoppers stretched their lead out further following a late 5-2 run to take the second set 25-19.

With their backs against the wall, the Owls fought back in the third set. An 8-2 run midway through the set gave the Owls the lead, and they never gave it back. Led by senior outside hitter Nicole Lennon, who had nine of her match-high 22 kills in the set, and late kills by junior middle blocker Anota Adekunle and freshman outside hitter Sahara Maruska, Rice weathered WKU’s late comeback attempt to take the set 25-21.

Using the momentum from the previous set, the Owls started the fourth set off strong as they used an early 8-2 run to build a solid lead. The energy and momentum all seemed to be in the Owls’ favor as Lennon continued to drive the offense to maintain their lead throughout the set. The Owls were on the verge of forcing a fifth set as they led 20-16. However, WKU stormed back as they managed to rattle off five straight points to take the lead late on. Rice attempted to claw their way back, but was denied as the Hilltoppers rode their momentum to take the set 25-22. For consecutive seasons, the Hilltoppers were crowned Conference USA champions. Despite the loss, Volpe was particularly proud of her team’s competitiveness and adaptability throughout the match.

“They are competitors through and through and they are never going to quit or give up,” Volpe said. “Not only that, it was the adjustments we were making. They were doing what we were asking them to do in a tough environment. They were constantly being challenged by [WKU] and we kept finding ways to re-attack.”

Lennon, Graham and Maruska were all named to the C-USA All-Tournament Team for their impressive performances. Volpe was extremely proud of each player’s performances throughout the tournament.

“Our setter, Carly Graham, and her ability to get everybody involved in the offense [as] she’s got such a strong knowledge of the game and she really tries to get every single player involved in the game,” Volpe said. “Nicole Lennon proved [to be] the All-American that she is [as] she took so much on her back playing six rotations. Sahara added so much aggressiveness on offense. She went out there and had no fear of the block. She played to score on pretty much every single ball. She’s taking on a significant role as a freshman and she definitely was deserving of that honor today.”

With the loss, the Owls missed out on the automatic bid to the NCAA tournament given to the C-USA champions. Instead, as the No. 24 ranked team in the country, Rice had to hope for an at-large bid to the 48-team tournament. Their hopes were answered on Sunday when the Owls were awarded a spot in the field.

The Owls will open the tournament on April 14, against North Carolina A&T State University. The Aggies earned a spot in the tournament by going 11-1 on the season, before winning the Mid-Eastern Athletic Conference tournament. According to Volpe, despite the loss to WKU, the Owls believe that they can make a run in the tournament.

“Our belief is that we can compete and go deep in the tournament,” Volpe said. “[The WKU] match didn’t change that, it actually reinforced it.”