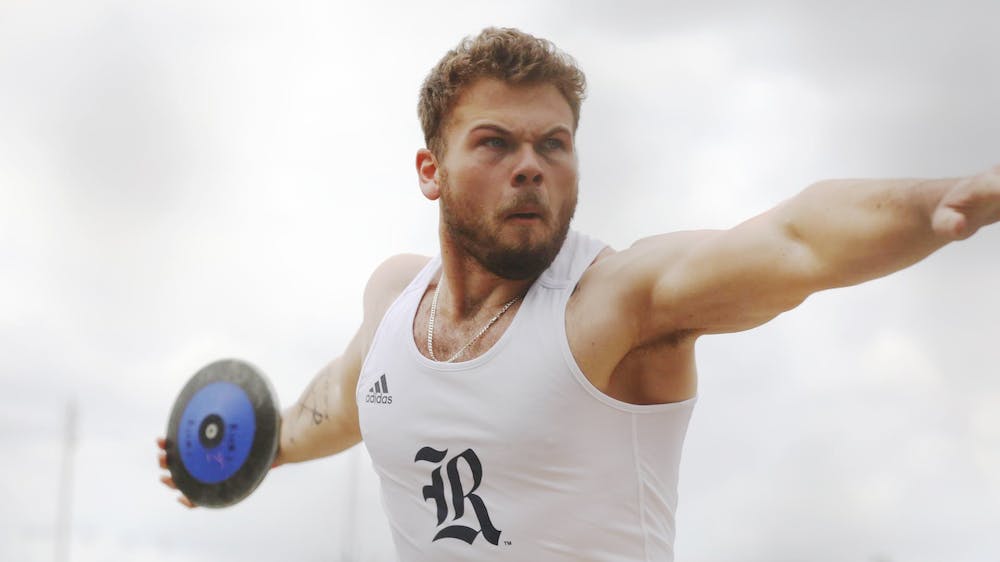 Both Rice track and field teams were in College Station over the weekend for the Texas A&M Invitational track meet. Six Owls won events at the meet, three each from the men’s and women’s teams, and 14 Owls had top-3 finishes. According to men’s head coach Jon Warren, the Owls put on a strong show against tough competition.

“It was a very good weekend in College Station,” Warren said. “We had quite a few other top performances in a meet that, as you can guess since it was hosted by the Aggies, had a stellar competition.”

On Friday, the Owls had a handful of strong showings. Rice took five of the top seven spots in the women’s 5,000 meter, including a first-place finish from senior distance runner Khayla Patel. Redshirt junior thrower Julie Perez also stood out on Friday, placing second with a discus throw of 53.79 meters, the second-best mark in program history. According to women’s head coach Jim Bevan, Perez’s throw was one of the highlights of the weekend for the Owls.

“Julie Perez had a big throw,” Bevan said. “That mark should get her into the national championships.”

Meanwhile, on the men’s side, sophomore thrower Samuel Woodley stole the show for the Owls on Friday. His first place discus throw of 58.71 meters beat the competition by two meters, earning him the second farthest throw in program history, and the sixth farthest throw in Division I this season. Warren said that Woodley’s throw stood out on a day that saw several other Owls turn in strong performances.

“Sam Woodley had the biggest weekend out of a group of guys that had outstanding weekends,” Warren said. “It’s tough to top a throw that wins the meet, ranks No. 2 all time in Rice history and is the No. 6 throw in the NCAA.  Truly outstanding.”

According to Woodley, setting a new personal record was gratifying.

“There was a lot of energy around the discus cage when the distance was announced,” Woodley said. “I might have even shouted a little bit out of excitement. It was great to see the hard work in the cage and in the weight room result in a new [personal record].”

On Saturday, the Owls took home two more golds on the women’s side. Junior shot-putter Erna Gunnardóttir set a personal best with a 16.72 meter launch, to take first place. Graduate jumper Michelle Fokam, who already has four All-American honors during her time at Rice, added to her resume with a new personal best of 13.52 meters in the triple jump. That mark earned Fokam first place on Saturday, while currently ranking fourth in the NCAA this season.

According to Fokam, she was surprised to see that she had set a new personal best.

“I didn’t realize the jump was so far,” Fokam said. “I’ve known all season long that I [was] capable of jumping further than my PB, it’s just that jump didn’t feel like the best jump or the farthest jump of my life.”

According to Bevan, while a number of Owls performed well over the weekend, Fokam’s jump was the highlight.

“We had some outstanding performances [all weekend], highlighted by Michelle Fokam winning the triple jump and qualifying for the Olympic Trials with a mark of 44’ 4.25,”” Bevan said.

Fokam also said that she was impressed by her teammates as well throughout the weekend.

“The team showed out this past weekend at A&M,” Fokam said. “Every single person on the team is continuously getting better, making our team ever stronger [as we approach] the conference meet. I couldn’t be more proud of the girls and where we are individually.”

On the men’s side, Rice’s day was highlighted by two events in which an Owls took each of the top two spots on the podium. In the hammer throw, junior Nick Hicks took first place, while freshman Shaun Kerry took second. Then, in the steeplechase Rice repeated this feat, with seniors Hociel Landa and Andrew Abikhaled taking first and second place respectively. After the meet, Warren said he was impressed with what his team was able to do in both events.

“To go one-two in one event in a meet of this caliber is an excellent result,” Warren said. “To have it happen in two events is truly outstanding.”

Despite their successes, both teams dropped slightly in the National Track and Field Ratings Index rankings published on Monday. The men’s team placed No. 66, down ten spots from last week, while the women’s team fell three spots to No. 32. As the outdoor season winds down, Bevan said he is happy with where his team stands.

“I am very impressed as a whole with where we are at right now,” Bevan said, adding  “We are making progress, trying to stay healthy and balance our training, competing and academics right now. We need to continue making small strides, event by event to get to the conference meet at our best.”

With only three meets remaining before the Conference USA championships, both teams will travel to the University of Texas at San Antonio for the Roadrunner invitational on Saturday.