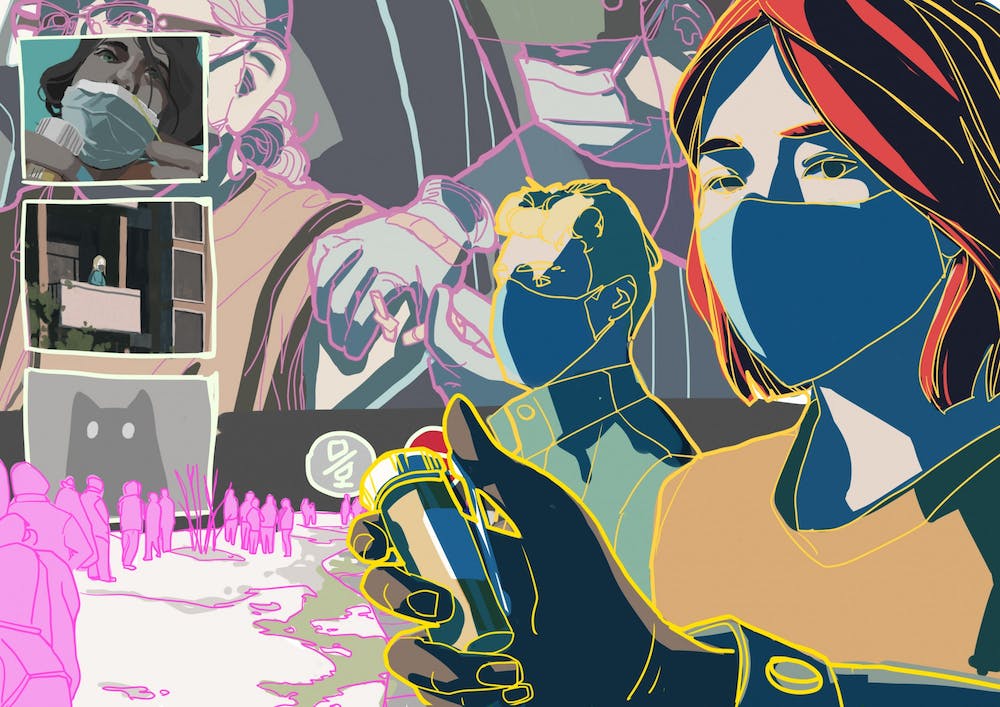 Rice has rescinded its mask requirement in outdoor spaces and no longer requires that fully vaccinated individuals take weekly COVID-19 tests. The announcement follows the results of a community survey of vaccination status that revealed 74 percent of the Rice community members have received at least one dose of the COVID-19 vaccine.

According to the email sent to the Rice community last week by Kevin Kirby, chair of the Crisis Management Advisory Committee, masks will not be required outdoors as long as individuals remain at least three feet away from each other. Fully vaccinated individuals will be able to opt out of testing.

Currently, the survey shows 87 percent of Rice undergraduates, 61 percent of graduate students, 72 percent of faculty and 72 percent of staff are vaccinated. It was unclear whether those numbers referred to full inoculation or just receiving at least one dose. As of last Friday, 82 percent of Rice’s core population of 11,000 has responded to the survey.

Kirby said everyone at Rice has had the opportunity to receive a vaccine if they wanted one. Some members of the community stated on the survey that they do not have the intention of getting the vaccine, but, according to Kirby, this number is low.

These policy changes were made in light of an increase in the number of individuals at Rice that are vaccinated and the knowledge that is now known about the virus, according to Kirby.

“We know it’s safer to be outdoors … [A year ago] we were teaching all of our staff to wipe down surfaces and things like that,” Kirby said. “Turns out that the ability of the virus to be passed on through surface transmissions are very low — possible, but still very low. The primary transmission is aerosols. And so if you’re outside … it’s better.”

Elysia Wu, a Lovett College sophomore, said that she felt these policy changes were unnecessary given that there were only a couple weeks until the end of the semester.

“I just don’t … understand why admin felt the pressing urge, two weeks before the semester ends and people go home for the summer, to suddenly rescind their mask policy,” Wu said. “I don’t see the benefit of getting rid of it all of a sudden. I just think it’s really ridiculous and unnecessary.”

Jonathan Lloyd, a Will Rice College sophomore, said that he believes the university is making the right decision by relaxing COVID-19 policies.

“So many people are vaccinated [so] I think it’s about time we started relaxing more restrictions,” Lloyd said. “Stuff like the outdoor space cap could be relaxed, as well as the alcohol policy.”

President David Leebron said that one factor in the decision was the experience of the graduating class nearing the end of the year alongside vaccination rates and low infection rates in the community.

“I think, candidly, one other factor was for our graduating students and for students about to go home, ending the year,” Leebron said. “We wouldn’t do this if we didn’t feel confident about the safety of it. But I think ending the year on a positive note [was a factor].”

Masks will not be required in this year’s commencement ceremony as long as a three foot distance is maintained, according to Kirby.

Sam Holloway, a Brown College senior, said that he was surprised to hear that Rice was relaxing their COVID policies before the end of the year, but understands this was a result of the high vaccination rate.

“I think that, given these facts as well as how graduation will be outside in a larger space than normal, the ability to walk, be photographed, and celebrate with family without masks will be a refreshing reward for the Rice community’s public health efforts and an encouraging example of improvements still yet to come,” Holloway said.

Kirby said students should use their best judgement to decide whether or not a mask is needed in an outdoor space, depending on the situation they are in.

“If all of a sudden you find yourself in the middle of 100 people all packed together, get out of there or put on a mask,” Kirby said. “If you’re just walking by somebody and you’re within a foot, you’re not going to get the virus from them. But if you’re lingering and you’re in very close proximity, just take a step back.”

Kirby said that for many people on campus, the requirement to wear a mask outdoors is burdensome and could possibly be unhealthy.

“For some groups, people who [are] exercising vigorously, student athletes who [are] training, grounds crew who [are] taking care of … our beautiful campus, it’s really hard. So that’s not really necessary,” Kirby said.

Rice has been able to offer vaccines to the entire Rice community due to the increase in vaccine supply.

“We’re running our last [vaccine] clinic on Tuesday because we have no more demand,” Kirby said. “Almost everybody who’s wanted a vaccine now has gotten at least their first dose and most of them have gotten their second dose as well. Most people are now past that time. So, this requirement of regular testing is really not needed anymore.”

Leebron said that he felt many students were extremely happy about the relaxed mask policy.

Plans for the fall semester

On March 30, Leebron announced the administration is planning for a “largely normal fall semester.”

“While many details remain to be worked out, we envision most classes being delivered in-person, most university housing being fully occupied, and a relaxation of our COVID-19 policies such as gathering size and perhaps even the mask requirement (subject to guidance from the Centers for Disease Control),” Leebron wrote.

Kirby said that going into the next school year, Rice will have the knowledge on how to operate in this type of environment. He also said Rice cannot have another year where it does not provide the full social and academic experience for every member of the community.

“Our expectations … and our plans for the fall semester are to have as robust an experience as possible, meaning much closer to what it was two years ago than it was this past fall,” Kirby said.

Leebron said that in the coming fall Rice will consider spending more resources to support social activities for students, to make sure they are able to experience the social aspect of Rice culture.

“We need to make some reinvestment in the things that constitute our community,” Leebron said.

Leenah Abojaib, a Wiess College junior, said that she is looking forward to gatherings and appreciating the little things that were absent this past year. Abojaib remained on campus after students were sent home last March, and said she was incredibly thankful that the university rapidly set precautionary measures to protect its students.

“As we get closer to the end of the COVID-19 era on campus, I find it incredibly important to reflect back on how our university prioritized our safety, and to be thankful to all the departments on campus who worked diligently to keep us safe throughout and to provide us with vaccines,” Abojaib said.

Reflections on the year

Leebron said that a major challenge during the pandemic has been providing equal opportunities to all members of the Rice community.

“There were students, international students in particular, who could not even come to the campus, it didn’t even have a chance to come to the campus … Not everybody has the same technology at home. Not everybody has the same number of bedrooms at home. And so the challenge was to make sure in this unusual set of circumstances, that we could provide everybody the opportunity, not merely to attend their classes, but to succeed,” Leebron said.

However, Leebron believes that Rice was able to overcome this challenge by offering flexibility and access to students and instructors through institutional policies and technological adaptations. Going forward, Leebron hopes that Rice will be able to offer greater flexibility to students even when classes are in-person.

Kirby said that throughout the year the compliance and efforts of the Rice community and resources from the Texas Medical Center helped Rice get through the year successfully.

“We benefit from being across the street from a fantastic medical center. We got lots of advice from … experts there. We got lots of resources for testing, resources, vaccines,” Kirby said. “Then … we had a lot of really dedicated people, both employees and students who really stepped up.”

Kirby said the biggest challenge was dealing with the uncertainty of the pandemic.

“You know that this is a novel crisis. And where the science has been unknown and elusive, where everybody’s learning as we go along. How many cases to expect? We don’t know,” Kirby said. “We are but you know, we live in uncertain times. So there’s so much we don’t know. Right? Still about the effectiveness of vaccines against the variety of variants, their longevity, I suspect that there will be a booster shot for the vaccine that we will want everybody to get some time over the next year.”

Both Leebron and Kirby agreed that Rice’s response and reopening in light of the pandemic has been a success, with a relatively low positivity rate throughout the academic year.

“Rice has been seen as one of the most successful universities and in handling the pandemic. I think a lot of that credit goes to our students and the fact that they could achieve the right balances within the residential colleges, for example,” Leebron said. “I hope we’ll have a great commencement ahead that people can be celebratory about.”