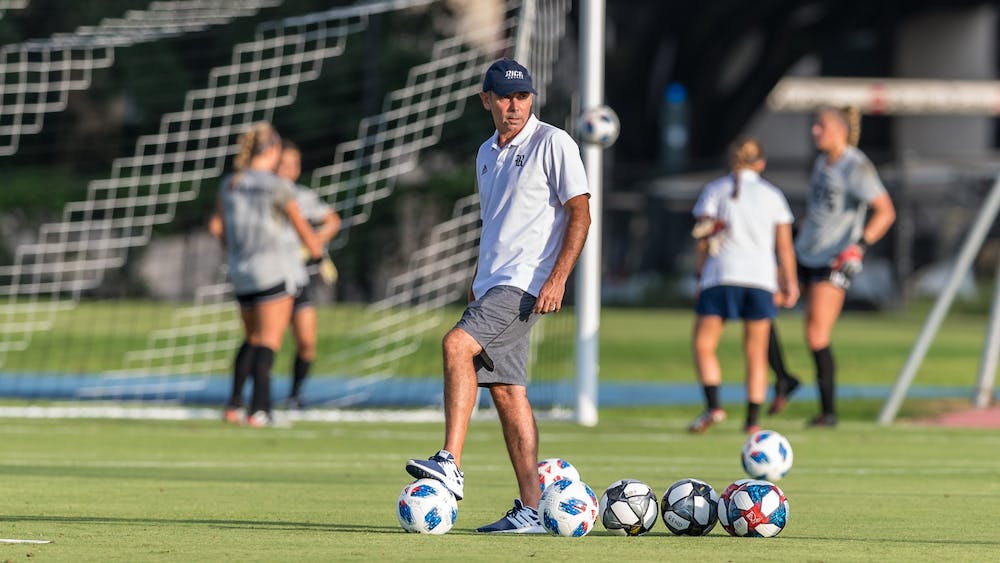 Two years ago, Brian Lee was celebrating a Southeastern Conference soccer title with his team at Louisiana State University. Lee was coming off of his 14th season in Baton Rouge, where he had led LSU’s women’s soccer team to six NCAA tournament appearances and had just been named a finalist for National Coach of the Year.

“It was a really interesting time,” Lee said. “We had a young team at LSU, and the future looked very bright.”

But when the head coaching job at Rice became available, Lee decided it was time for a change.

“Rice was a school I’d had my eye on [for a while]; I saw the potential here was so high,” Lee said. “I think they were surprised the LSU coach would be interested in the Rice job, but I think it’s one of the best jobs in the country.”

Lee has long believed that a strong academic reputation was one of the most important parts of building a college soccer program. The way he saw it, he could leverage Rice’s academic reputation to give him more power in recruiting than he ever had at LSU. Lee said that this conviction led him to give up his comfortable confines in Baton Rouge and venture to Houston to put his theory to the test.

“[I wanted to be] at a high academic and private institution,” Lee said. “Those are the type of schools that the best prospects in our sport want to come to. If you look across college women’s soccer, some of the national powers are Stanford, Duke — Notre Dame has won championships; Georgetown has been to Final Fours. Better recruits are more likely to come to Rice than to LSU.”

Two years into his experiment, Lee has seen some promising early returns. The Owls won 13 of their 15 games this season, including 10 straight, en route to a C-USA championship, a No. 22 ranking in the country, and a spot in this week’s NCAA tournament. According to Lee, the team’s progress so far has exceeded even his most optimistic timelines.

“It’s surprised me how quickly [we’ve been able to achieve this success],” Lee said. “Last year’s senior class really helped us set a nice culture for the team. Then the upperclassmen we have right now have accelerated that. The entire team has bought in. A lot of the kids have improved in the past 24 months.”

On Wednesday, Lee will try to add to that list of accomplishments and lead the Owls to their first ever win in an NCAA tournament game. The Owls opponent, Furman University, will have special significance for Lee.

Lee played at Furman for four years, before graduating and starting their women’s soccer program. During his 11 seasons in Greenville, Lee led the Paladins to four NCAA tournament appearances and Lee won Southern Conference Coach of the Year five times. According to Lee, he’s excited for the opportunity to play his former team.

“Andrew Burr, who was my assistant coach at [Furman] and a college teammate of mine, is still the coach there,” Lee said. “It’s really special for both of us. I’m very invested in them, I watch a lot of their games to support Andrew and the alma mater.”

However, Lee said that at first he actually wanted to be a teacher as well.

“At the time, I wanted to be a Division III men’s coach, and teach while I coach,” Lee said. “I was a political science major, so I [thought I would teach] political science, history or sociology. I was amazed by professors who could just stand up and talk for an hour and keep the [students] interested. I really wanted to do that kind of college teaching, and coach on the side, but it just spun in a different direction.”

After he left Furman, Lee went to LSU, where his tenure got off to a fast start. The Tigers made the NCAA tournament in just his third season and in three of the four seasons after that. However, the program struggled over the next six seasons, putting up a record of 19-38-8 in conference play and making the tournament just once. Lee righted the ship with a conference title in his final season before heading off to Rice.

The fresh start has served him well. The Owls have started to show glimpses of the promise that made Lee give up his job to come to Rice. But regardless of what happens on the field, Lee said he is just happy to be at a place where he loves showing up to work everyday.

“I wanted to get to [the point] where I enjoy the day-to-day,” Lee said. “I love the day-to-day with our players and coaches [here].”