Killgore pushes the boundaries of goalkeeping for Rice 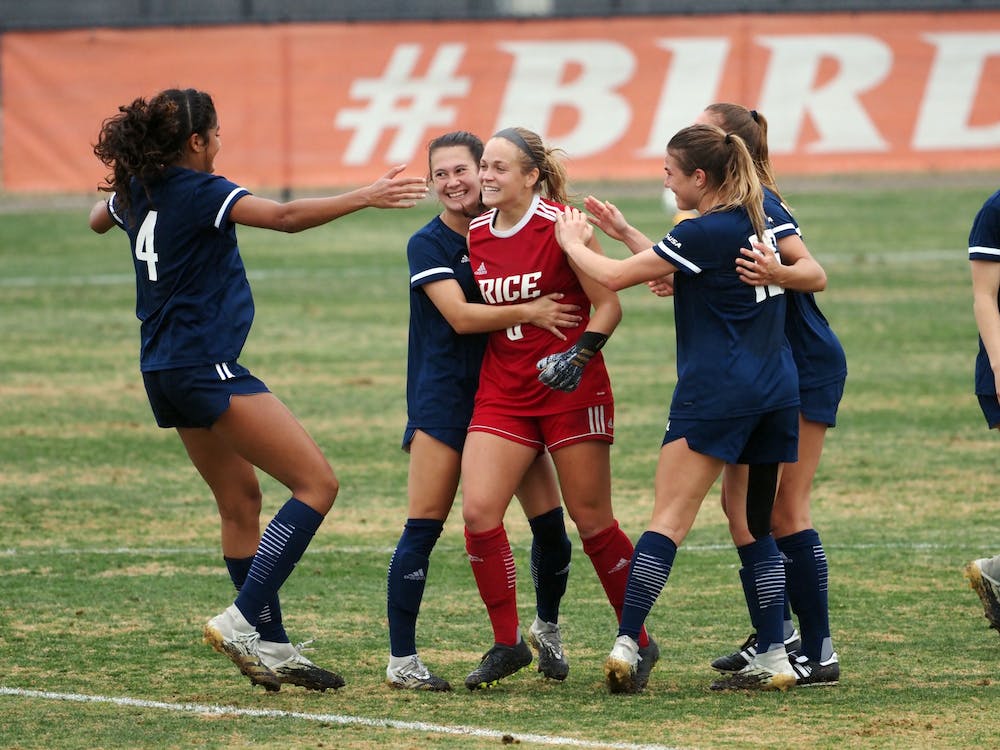 The traditional role of a soccer goalkeeper is to prevent the opposing team from scoring goals, and nothing more — but don’t tell that to junior goalkeeper Bella Killgore. She hasn’t allowed a goal to get past her in over a month, but she’s also added an offensive component to her game this season, chipping in four goals for the Owls off of free kicks.

According to Killgore, her rare two-way skillset started as an idea that head coach Brian Lee had in practice.

“It was [Lee’s] idea,” Killgore said. “In spring 2019, he had me taking some in practice, and I actually started taking them in a spring game that semester. Now, I add the role of free kicks, which includes getting good service into the box from all over, and sometimes in shooting range.”

This season, Killgore’s play on both ends of the pitch has started to turn heads. She is tied for eighth in the conference in goals, despite limited opportunities as a goalkeeper. Meanwhile, she has shut out 10 of Rice’s 15 opponents this season. Her play earned her first team all-conference and Conference USA Goalkeeper of the Year honors.

“It’s definitely been a long year, with a lot of maybes and uncertainties,” Killgore said. “But to me, this season has been so special to see my teammates improve and to get better along with them. I’m honored to have won both of those awards, but both really are a reflection of the team as a whole having a great season.”

Killgore is now an all-conference goalkeeper recognized for pushing the limits of the position — but her love of soccer started early on in her life. Despite not having any family members who played soccer competitively, Killgore recalls taking to the game of soccer at a young age.

“I started playing when I was around five or six and always loved it,” Killgore said. “I tried a few other sports, but soccer was always my favorite to play. When I was younger, I played on the field and in goal, but around 12 years old, I transitioned to primarily playing in goal.”

Like many athletes, Killgore had her idols as her soccer aspirations grew. Notably, German goalkeeper Manuel Neuer inspired Killgore because of his style of play and unique ball-handling skills as a goalkeeper, a skill she would later put to good use in her career. While goalkeepers like Neuer inspired Killgore with their styles of play, she said she is constantly trying to improve her game in all facets.

“For goalkeeping, it’s a never-ending cycle of small improvements,” Killgore said. “There are endless things to work on. That’s what I love so much about the position: You can never run out of goals to set, work on, get to, and reset to start the cycle all over again.”

As Killgore progressed in her sport as a goalkeeper, she was motivated to continue playing soccer at the next level.

“In high school for me, my motivation was to keep working hard to get the opportunity to keep playing in college, because I didn’t want to be done yet,” Killgore said. “Once I got to college, I reset my goals and started working towards them.”

Setting goals and smashing them year after year is exactly what Killgore has done during her Rice career. Each year, Killgore has continued to develop as a goalkeeper, improving her save percentage and goals against average for three consecutive seasons. In her standout junior season, Killgore led C-USA in shutouts, saves and save percentage. Killgore attributes much of this success to the backline defending in front of her.

“I attribute this to our defense this year, who have been phenomenal,” Killgore said. “I just think all the work we have put in as a team over last summer and fall have paid off, and it reflects in probably every statistical category across the board, most excitingly that C-USA championship [match.]”

While Killgore has pushed the goalkeeper limits on the pitch this season, she still thrives in more traditional aspects of the role. This year, she has blossomed as the Owls’ primary defensive communicator.

“As a goalkeeper, my role is to organize the backline and have great communication first and foremost,” Killgore said. “I think my biggest strong point is my communication. This is probably the most important thing I do because I have the view of the entire field, so it falls on me to organize us defensively.”

Killgore has distinguished herself as more than just a goalkeeper and communicator for the Owls, influencing the game in unprecedented ways from the goalkeeper position. Her multifaceted impact has been a key reason why the Owls squad capped off a 12-2-1 season as conference champions and the No. 22 team in the nation. With the NCAA tournament on the horizon, Killgore and her teammates have known for a while that their team was destined to be special this season.

“When everything was canceled last February, we knew we had an opportunity to set ourselves apart from our competition,” Killgore said. “We were consistent in our determination to put in all the hours necessary to get better. So seeing all the hard work pay off has been special.”