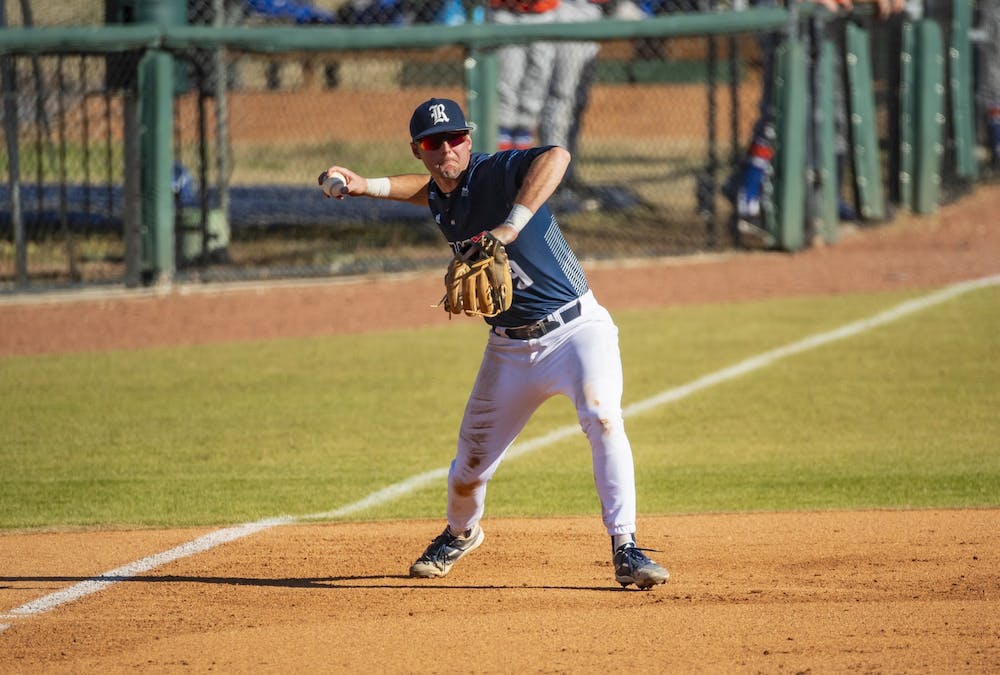 After winning only two of the 10 games prior to their series against the Roadrunners, this series has provided a sense of momentum for the team as it heads into the final weeks of regular season play, according to freshman outfielder and pitcher Guy Garibay.

“I think there were a lot of good things that happened this past weekend against UTSA,” Garibay said. “Overall, the team energy was great and will transition into these next few weeks.”

Head coach Matt Bragga agreed with Garibay’s thoughts, as he believes that his team’s split series this weekend was positive for the team’s momentum while he hopes that the team can build upon their performance and improve. Bragga also mentioned the team’s improvement compared to their earlier series against UTSA this season, when they lost three matches and won one.

“Splitting the series is certainly better than losing, that's for sure,” Bragga said.“We showed improvements from the last time we played UTSA earlier in the season which is great, but we can never be satisfied with a split of a series. We want to win the series or sweep the series and we are working towards that.”

While assessing his team’s performance over the weekend, Bragga said he also believed that the team performed well and showed great fight.

“The performance over the weekend was fine as there were some nice highlights and some really good individual performances,” Bragga said. “ I am proud to continue to see a never die mentality from our guys and it is always encouraging when things aren’t going the exact way you’d like them to go. This is a great group of young men and they continue to work hard to improve.”

Despite the positives that came from the team’s performance against the Roadrunners, Garibay believes that the inconsistent pitching performance is something that the team can improve on.

“Our bats have been great, but there were times our pitching struggled which put us in a hole the rest of the game,” Garibay said.

Bragga also believed that the team can improve through improvements in their squad’s inconsistencies, especially on the pitching side of the ball. However, Bragga said that he is optimistic that the team will be able to improve on their weaknesses as the season continues.

“Our biggest weakness, especially from this weekend’s series, is playing high-level baseball consistently. We are very up and down in many facets of the game,” Bragga said. “For example, we pitch well one game, but then the next is not a good pitching performance. We need continual improvement in each phase of the game, and while our guys have done a pretty good job with this, we just need to be more consistent.”

Garibay stood out over the weekend, giving the Owls four hits and driving in four runs. Garibay said that the guidance provided by his older teammates has helped him improve over the course of his freshman year.

“I believe that my freshman year has gone quite well. This year has been different than usual because I have been playing with fifth- and sixth-year seniors like Brad Gneiting and Braden Comeaux,” Garibay said. “They have a lot of experience under their belt and they have helped me mature as a player and they made me feel as if I had been playing with them for years. I am really going to miss having those guys around next season.”

Garibay also gave the Owls a scoreless inning on the mound on Saturday. Garibay said he is thankful for his role on the team, which allows him to contribute on the mound and at the plate.

“I’ve had some memorable moments both at the plate and on the mound and I have also grown as a hitter,” Garibay said. “I think it’s pretty cool being able to do both at this level. There’s not many people who are able to say they both hit and pitch at the Division I level, so I’m thankful for that.”

This weekend, the Owls' season continues against the University of Southern Mississippi. The four-game series, which includes a doubleheader Saturday, will take place at Reckling Park.