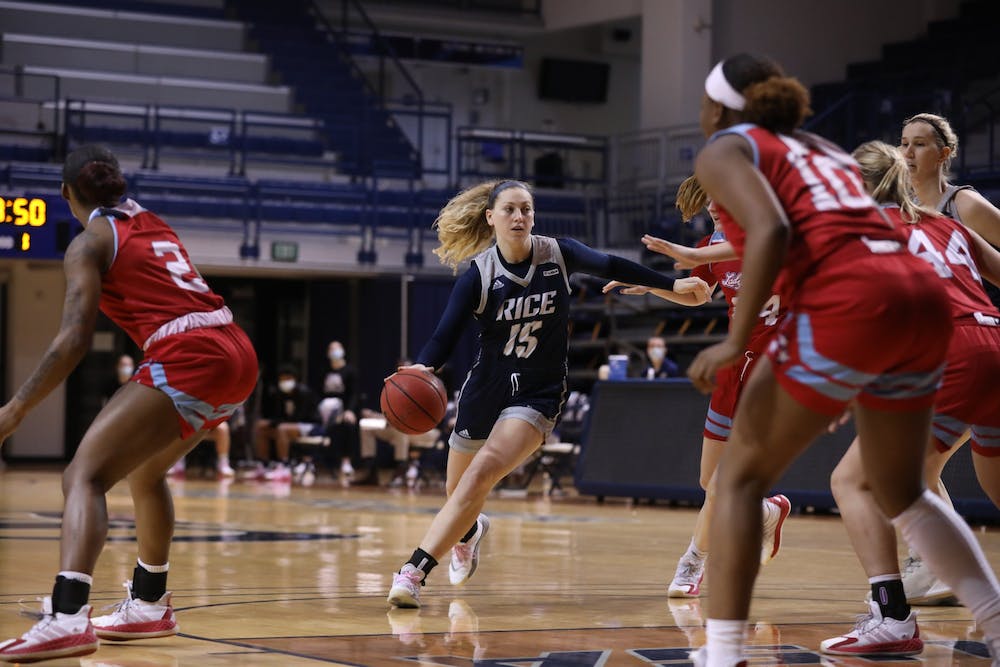 Rice Women’s Basketball improved their record to 15-2 with back-to-back victories against Louisiana Tech University this weekend. The Owls outscored the Lady Techsters by a combined 34 points as they earned their tenth and eleventh conference wins of the season. Head coach Tina Langley said she is proud of her team’s performance, especially given their stop-and-start season due to the pandemic.

“I couldn’t be more proud of the group of women that I get to coach,” Langley said. “They keep showing up and working hard; their resilience and toughness are amazing.”

On both ends of the court, the Owls were dominant. On the defensive end, they held the Techsters to 31 percent and 36 percent shooting respectively. According to Langley, the team’s defense performance was a return to what she’s been used to with this group.

“I thought we had great effort defensively these last two games and we started to look more like ourselves,” Langley said.

On Friday, the Owls sank a season high 14 three-pointers, shooting 58.3 percent from beyond the arc, as they cruised to a 23-point victory. Four Owls were in double figure scoring, led by junior guard Jasmine Smith who had 16 points in 27 minutes and senior center Nancy Mulkey who scored 13 points and snagged 14 rebounds.

Coach Langley was thrilled with the energy and passion that Mulkey, who is the 2021 Naismith Women’s Defensive Player of the Year Semifinalist, brings to the court every day.

“[Mulkey] brings passion for the game and an energy and love for it that really fuels us,” Langley said. “She’s so humble and works so incredibly hard.”

The Owls dominated on the glass as well, outrebounding the Bulldogs by a margin of 43 to 27. They also led the game in bench scoring, thanks to contributions from multiple younger players.

“We’re a very young team and it’s exciting to look and see who they can become,” Langley said.  “I look at some of our young players right now and think [these next few years] are gonna be really fun.”

After honoring the seniors pre-game on Saturday, the Owls won the back end of the double header, led by Muley who notched her second double double of the weekend (15 points and 12 rebounds) and sophomore Lauren Schwartz who added a game-high 19 points of her own.

Langley was very pleased with the performance of the young sophomore, who not only put up big offensive numbers but had a difficult defensive assignment on the other end of the court, matching up against the Lady Techster’s senior guard Amber Dixon.

“Lauren Schwartz is [quite] a player,” Langley said. “She has a great IQ, handles the ball well for us and can shoot at all three levels. She had a tough defensive assignment [this weekend] and did a great job. She continues to grow and I’m so proud of her and the work she puts in.”

During the game on Saturday, Mulkey also drained her third three-pointer of the season, notable for a 6’9” center. That shot also pushed her over the prestigious 1,000 pointmark for her collegiate career wearing the blue and grey. Langley said she is not only proud of Mulkey’s on-court dominance, but also how she carries herself off of the court.

“Nancy is an incredible person, it was hard not to get emotional today,” Langley said, talking about Mulkey’s 1000th point and the senior day ceremonies. “We were talking about how close we’ve all grown through the years, and I love her so much. She’s a selfless person with incredibly high character.”

The Owls are back on the court this week with a double header against the University of North Texas. In what was originally supposed to be an off-week before the Conference USA tournament, these games had to be made up from three weeks of games the Owls had canceled in the midst of the season.

“C-USA decided that teams who missed games could make them up next week,” Langley said. “Unfortunately, it is right before the conference tournament, but we’re grateful for the opportunity for the practice and opportunity to play.”