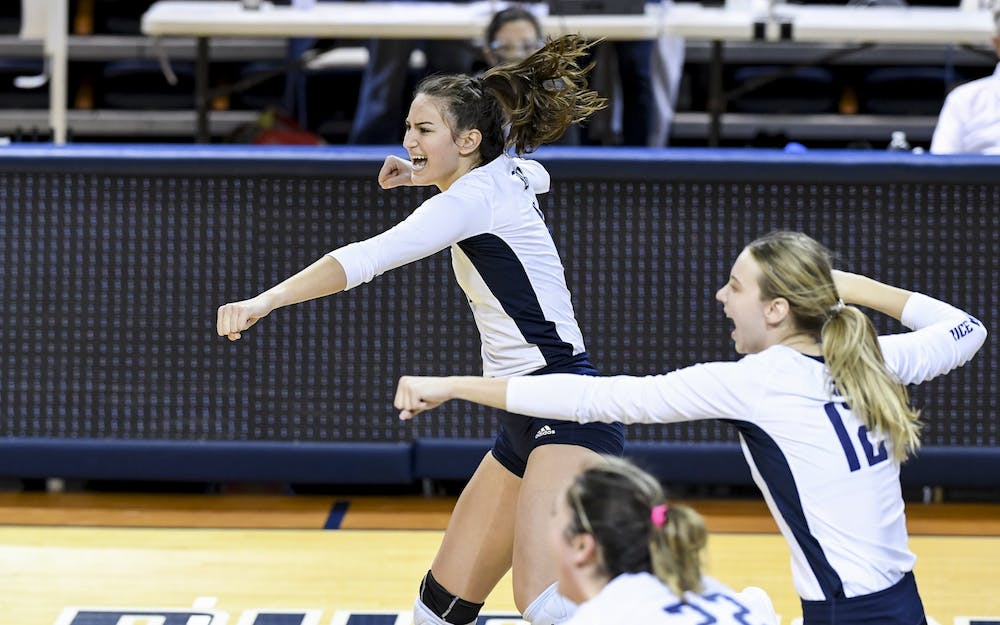 Rice volleyball beat the University of Texas at San Antonio in both legs of a two-match series in San Antonio this week. On Sunday, the Owls defeated the Roadrunners in five closely contested sets, while on Monday they won in straight sets. The Owls have now won all eight of their matches since conference play began, and are 9-3 on the season.

According to junior middle blocker Anota Adekunle, the Owls’ teamwork carried them against the Roadrunners.

“What stood out to me most about this series was our ability to fight through adversity and display the one word that the game of volleyball is all about: teamwork,” Adekunle said. “We started off a little shaky in the first game, but we found a way to persevere. In the second game, we had to all come together. Some people even played different positions due to injuries. It was an amazing display of focus and teamwork.”

The Owls entered the series having not dropped a single one of the 18 sets that they had played since they began their conference schedule. On Sunday, they quickly extended that streak to 20, taking the first two sets against UTSA by scores of 28-26 and 25-21. However, the Roadrunners nearly pulled off the comeback, winning sets three and four, each by a score of 27-25. With the match tied at two sets apiece, the Owls won the tiebreaking third set by a score of 15-10 to seal the victory. Senior outside hitter Nicole Lennon had a match-high 19 kills, while Adekunle set her new season-high with 15 kills. Junior setter Carly Graham had a game-high 53 assists, 49 more than any other Owl. According to head coach Genny Volpe, while the team wasn’t at their best on Sunday, they showed grit by still managing to win.

“On Sunday, we didn't play a very sharp match,” Volpe said. “But [we] managed to grind it out and pull out the win.”

Monday’s match went very differently. The Owls made quick work of the Roadrunners, winning all three sets by five or more points. Across all three sets, UTSA managed just 43 points compared to Rice’s 75. Lennon once again led the Owls in kills, this time with 11, while Graham once again led the Owls with 27 assists, this time adding seven kills as well. Volpe said she attributed the decisive victory to a much cleaner performance than the previous day.

“On Monday, we were a much more consistent team,” Volpe said. “We served well, ran a balanced offense, and were able to match up very well against UTSA. We made a lot [fewer] errors, and we played a much cleaner overall match.”

Volpe said that contributions from Adekunle and Graham were key against UTSA.

“Anota Adekunle caused problems for UTSA all weekend,” Volpe said. “They just couldn't slow her down. Carly Graham had a strong overall performance, posing a threat as an attacker herself, as well as running the team offense.”

Adekunle, who had a series-high .477 hitting percentage over the weekend, said that the close match on Sunday caused her to step up.

“This was the first time in conference play that we’ve really been challenged by another team,” Adekunle said. “So just knowing that I had to step up and be a leader for my team drove me to be more efficient.”

With the wins in San Antonio, the Owls continue a stretch of strong play dating back to the beginning of their conference schedule. Since losing three of their first four matches of the season, all to non-conference opponents, the Owls haven’t lost a single match. According to Volpe, the team is not focused on maintaining the streak, but knows that if they continue to improve, wins will follow.

“We really work hard to focus on how we play, not the score or the set count,” Volpe said. “We have been working very hard to improve each aspect of our game, and when we do that, the score usually is a reflection of that work. I am proud of our improvement so far and feel confident we can continue improving with consistent focus.”

“We know that, because we are playing so well, teams will be gunning for us and will come out giving everything they have to beat us,” Adekunle said. “This just motivates us to come to practice every day with an attack mindset and try to improve our game with each match we play.”

The Owls will host the University of North Texas for a two-match series on Sunday and Monday.