‘The United States vs. Billie Holiday’: Andra Day shines while others are left behind 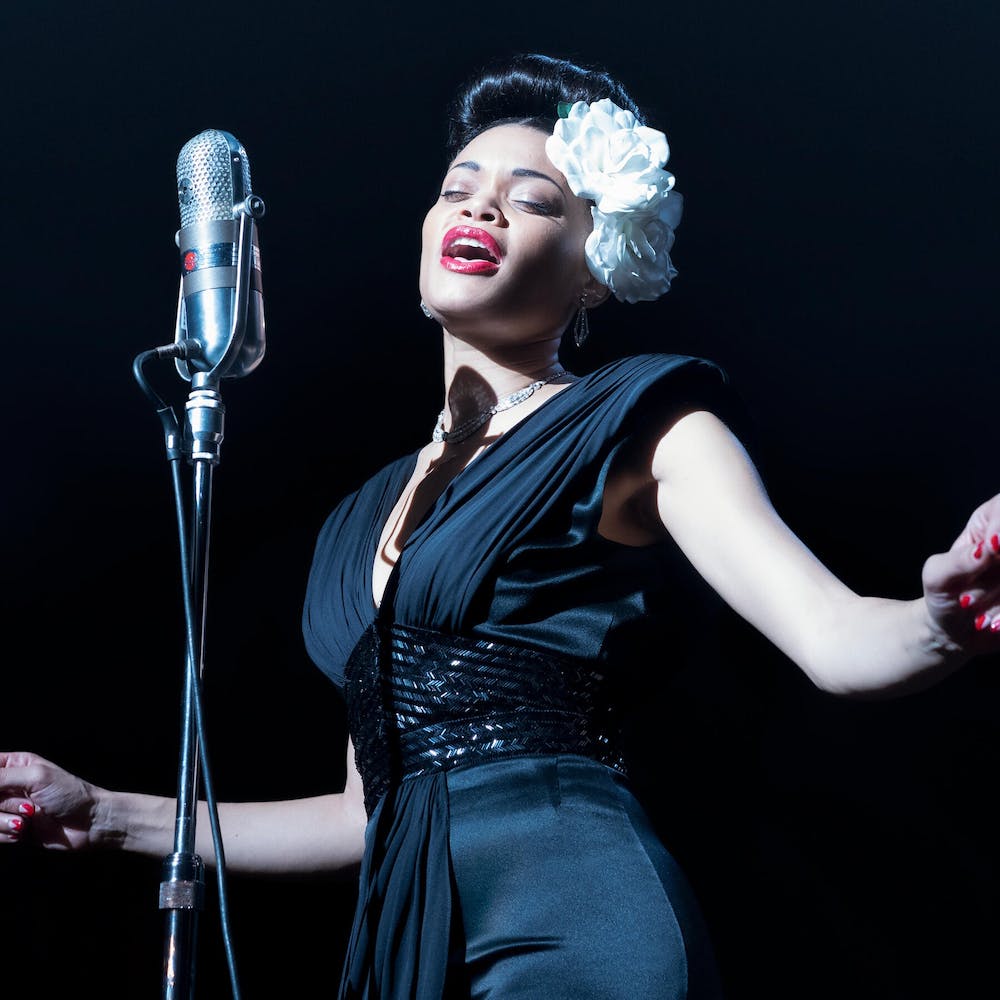 It can be hard to imagine that Andra Day, who plays legendary jazz singer Billie Holiday in “The United States vs. Billie Holiday,” has never played a leading role before. Better known for her success in the R&B music scene than on the silver screen, Day beautifully captures the spotlight and Holiday’s essence: her swagger, her love for gaudy jewelry and clothes and especially her voice. The same success, however, cannot be said for the rest of the movie, directed by Lee Daniels and written by Suzan-Lori Park. Though it boasts a talented star-studded cast, "The United States vs. Billie Holiday" largely fails to do justice to Holiday's life and legacy due to shallow writing and confusing plot development.

The movie follows Holiday’s rise and fall from notoriety after the performance of her iconic song about the horrors of anti-Black violence in the Reconstruction era, “Strange Fruit.” The main issues with the film are its disjointed timeline and its tendency to only skim the surface of important events in Holiday’s life. This was despite the many big name actors and actresses who took on the roles of Holiday's friends and enemies, their characters were not thoroughly fleshed out by the film's writers. Due to the overall disjointedness of the film's timeline, the subplots they offered fell flat. This includes performers such as Natasha Lyonne (“Orange Is the New Black,” “American Pie”) as Tallulah Bankhead, a socialite and actress who supposedly had a romantic relationship with Holiday, Tyler James Williams (“Everybody Hates Chris”) as world-famous jazz saxophonist Lester Young, a member of Holiday’s band and close friend, and Leslie Jordan (“Will & Grace,” “American Horror Story”), who plays a fan who interviews Holiday.

The rest of the movie is a jumpy depiction of Holiday’s career, starting with the peak of her fame and its downturn after the release of “Strange Fruit,” which was due to the federal government’s smear campaign against her, prompted by their fear that her song would spark even more civil unrest during the tumultuous era predating the civil rights movement. The plot the audience sees is often rushed, and its script seems too fast-paced to be immersive and sincere.

This smear campaign was headed by Harry J. Anslinger, played by Garrett Hedlund (“Troy,” “Friday Night Lights”), head of the Treasury Department’s Federal Bureau of Narcotics. It was he who instructed Jimmy Fletcher, played by Trevante Rhodes (“Moonlight”), to follow Holiday and set her up in a drug bust, which landed her in jail. This was just another example of the movie's phenomenal acting, but poor execution. The flashbacks stuck in between the plot of the federal government trying to penalize Holiday’s drug use never really felt like they belonged or had enough depth to seem relevant. And even when they did go into depth, the writing and flow of the storyline felt too rushed to be properly enjoyed by the audience.

Another example of this would be Holiday’s interaction with Lyonne’s character, Tallulah Bankhead. While romantic relations between the two women were, the film didn’t take a dive into the actual relationship. It seemed lazy, at best, and lacked the overall importance of a real conflict-resolution that would have made it necessary to the movie’s plot.

What this movie lacks in depth, however, is made up in its blunt portrayal of the time period directly leading to the civil rights movement. Holiday’s song, “Strange Fruit,” was, after all, a song written in protest of the rise in lynchings of innocent Black people and of the Jim Crow laws that still held a chokehold on southern African American communities. The most striking example of this was the film’s depiction of the members of Holiday’s tour bus stumbling upon a scene of a lynching while on the road. The striking scene — a burning cross with two Black children and their father trying to retrieve the corpse of their mother and wife — drives home the true message of “Strange Fruit.”  It also does a fantastic job of portraying the federal government’s thinly veiled “War on Drugs” which, in actuality, was just a war on Black communities.

All in all, I think this movie had many elements individually that could have made up a fantastic movie: a bombshell cast with a fabulous lead, a vivid portrayal of a fraught and difficult time in America’s racial history and plenty of plot material to source from the life of a legend like Holiday. However, it simply lacked the coherence and depth that a biopic of such an iconic figure should have had.

“The United States vs. Billie Holiday” was released on Hulu on Feb. 26. It can be viewed with a regular Hulu subscription.