The show goes on: 'Hello, Hamlet!' adapted for the screen after a year of delays 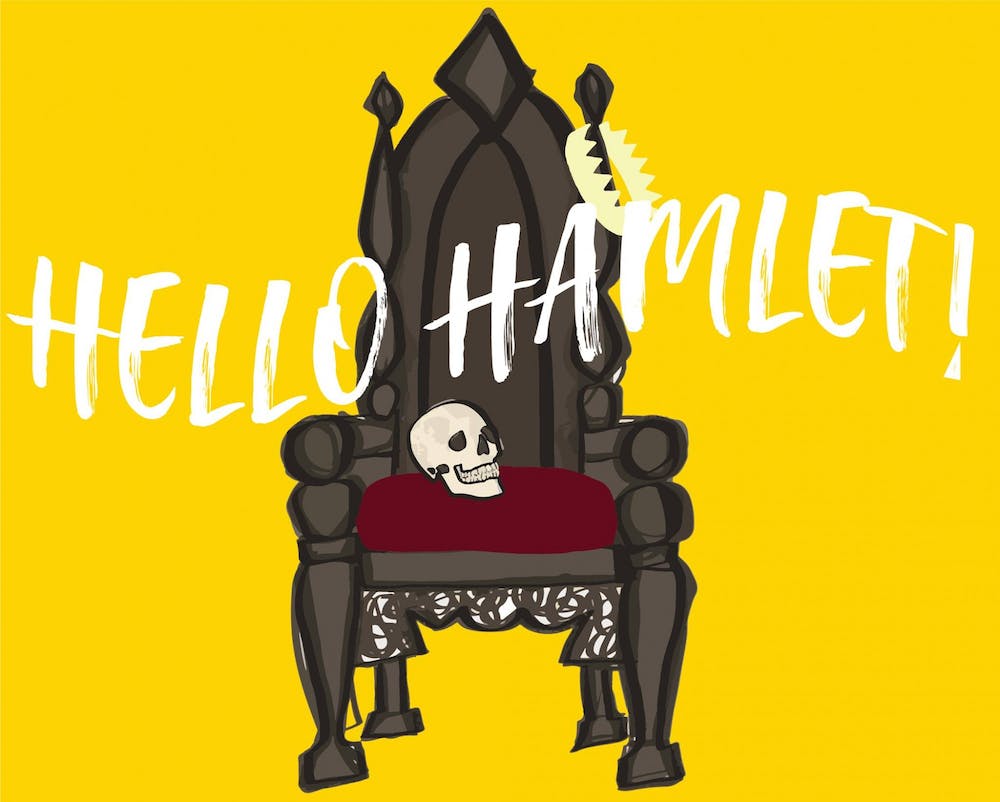 This past Saturday, Feb. 28, Wiess Tabletop Theatre streamed their quadrennial rendition of “Hello, Hamlet! A Play in Too Many Scenes,” a comedic retelling of William Shakespeare’s “Hamlet.” Performed roughly every four years since 1967, the musical is characterized by pop culture references and songs from movies and other musicals, rewritten each time to stay relevant. After the 2020 production was put on hold shortly before its premiere due to COVID-19 restrictions, it took a year for it to be adapted to digital media, starting nearly from the ground up.

While the original “Hello, Hamlet!” was staged in two weeks, this iteration of the two-and-a-half-hour production was first started two years ago by the Tabletop Theatre writing team. Director Tori Joshi (Martel ’20) and all three lead actors graduated last year — in total, 62 cast and crew from last year did not return, leaving an immense void of talent to fill, as well as the challenge of executing a musical in which the actors do not physically interact.

Elise Gibney (Polonius, producer, writing committee chair and editor) said plays like “A Doll’s House,” put on virtually by the Rice Players in November, were well-suited to using a live Zoom meeting as their stage, but not all productions could be adapted as easily.

“A musical done that way is just painful,” Gibney said.

Aside from choreographic challenges, live musical harmonies would be impossible as Zoom only focuses on one audio channel at a time. To make this unique performance possible, the actors of “Hello, Hamlet!,” who were all living in Houston during production, picked up costumes, props and green screen backdrops from Wiess College Commons to record scenes from their rooms. Director Adrian Almy mapped out the relative positions of each actor and provided directions so they could all gesture, make eye contact and stab in ways that would align in post-production editing. Each scene was recorded independently, with all the involved actors joining a Zoom meeting, pinning and recording their own video as they motioned and conversed.

“When talking to Cole [Thompson, who played Guildenstern], I was looking at the wall and speaking my lines at the wall,” Jake Yount, who played Rosencrantz, said. “The whole point was that when spliced together, it was like me and [Guildenstern] were talking to each other on stage. It was very intentional.”

The audio for musical numbers was recorded individually by each singer and layered together later. The team of editors meticulously stitched together each actor’s video recordings on a series of digital backgrounds custom-made by set designer Scarlett Spindler.

“The editing process was very lengthy,” Gibney, a Wiess College junior, recounted. “Most of us had never used Adobe Premiere Pro before so we were taught by the other editors who had, and also just from YouTube. We were very much flying by the seat of our pants on this. Adrian [Almy] spent 14 hours on Adobe After Effects turning [Lily Sethre-Brink’s, who played Fortinbras, broomstick] into a lightsaber.”

Because scenes were recorded straight through but song audio was done separately, actors lip-synced for the scenes’ videos. Low green screen lighting in some cases caused poor delineation between actors and their backgrounds. Scene dialog was often cut off by Zoom not recognizing switches in audio channels. These and other artifacts, the result of an unideal medium, actually help peel back the curtain so the audience can understand the sheer effort and number of considerations that went into acting, producing and editing at different stages.

Yount, a Martel College junior, and Thompson, a Martel College sophomore, were in the best position to speak to the advantages of the new digital format due to their roles and having been in last year’s iteration.

“[From last year in person,] time commitment for actors stayed the same across the board,” Thompson said. “In terms of behind the scenes, especially the director and assistant director having to stay focused and keep tabs on everybody's reactions, I feel like that was even more taxing than it would be at a usual rehearsal.”

Last year’s script had Rosencrantz and Guildenstern sit among the audience and engage with them in direct ways, so their characters saw the most extensive change. They now got to peer into the camera to ask the viewer a question, and spend much of the musical moving about kitchens or their dorm rooms until summoned back out of the audience. The feeling that Rosie and Guildie are there with you is either subtly or unintentionally enhanced by their videos being minimized to the corner throughout “Hello, Hamlet!,” much like one’s own video is during a FaceTime video call.

“For Rosencrantz and Guildenstern, our relationship with the fourth wall is tenuous at best,” Thompson said. “So playing with the Zoom ability to pop in- and off-screen and oftentimes look directly into the camera, whereas other more grounded characters weren't supposed to do that — that was very fun and kind of separated us in a way that you wouldn't quite get the same effect in an on-stage production.”

While drastically different from the production that very nearly debuted a year ago, this online show was not too untraditional by “Hello, Hamlet!” standards.

“The show has a history of being done in unlikely circumstances,” Gibney said. “The original in 1967 was put up in two weeks. And so, if they could do that in two weeks, we have a year to figure out how to make it remote. Surely we can pull that off. It’s not like the show has always gone smoothly. I don't know that the show has ever gone smoothly. And so, this was a different kind of a challenge for sure, because no one's ever tried to do it in people's houses on green screens and then splice it together and anything like that. It was very true to the spirit of the show we ended up doing. It just wouldn't be stopped.”

Considering the novelty and boldness of such a staging of this musical, the final product is charming and an accurate testament to the high degree of effort poured into it. With 10 new songs this time around from movies and musicals like “Moana,” “Dear Evan Hansen” and “Hamilton,” and dance moves incorporating flossing and dabbing, the newest “Hello, Hamlet!” bridges trends and timelessness. The freshmen involved cannot wait to stage it again in 2024.

“Hello, Hamlet!” was streamed on Wiess Tabletop Theatre’s YouTube channel, where the video will remain available to watch. The program can be read here.