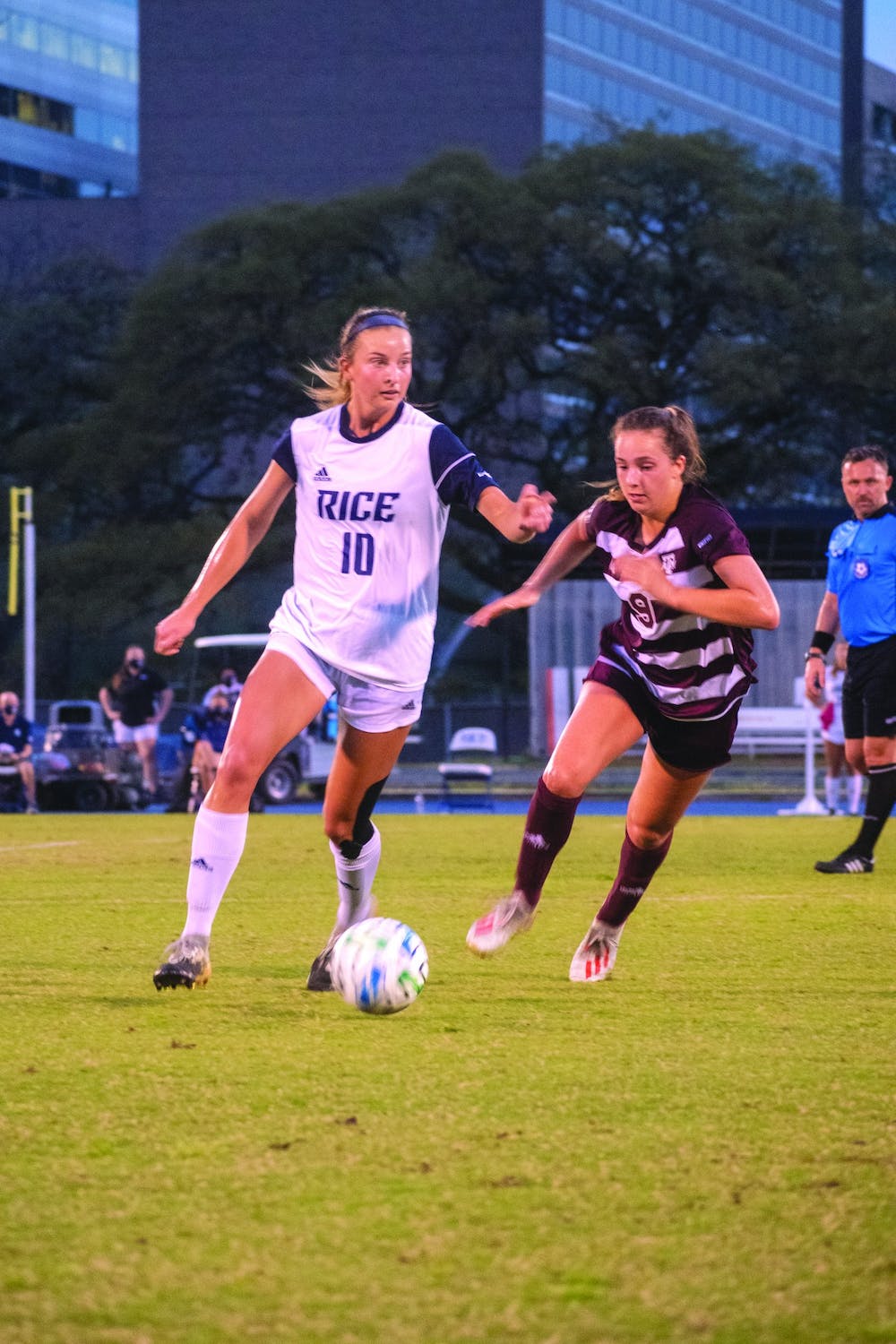 The Rice soccer team downed no. 12 Texas A&M University at Holloway Field on Monday in dramatic fashion. The Owls fell behind 2-0 early, but they were able to climb back into the game with two goals of their own to tie it and force overtime. In the final seconds of overtime, senior defender Caleigh Page sent a shot into the back of the net, giving the Owls a 3-2 win, and securing the upset. After the game, head coach Brian Lee said that it was an important win for the Rice soccer program.

“I’m really happy for the players and everyone involved with the program,” Lee said. “What a fun night.”

The win marked the first time the Owls had beaten an opponent ranked this highly in fifteen years. According to Lee, it took a strong performance from the whole team to win against the odds.

“Everybody [played well, it was just a total team effort,” Lee said. “Top to bottom, everyone showed up and earned the win.”

Both teams were held goalless through the games first half-hour. However, in the thirty-first minute, the Aggies scored two back-to-back goals, in the span of 13 seconds. This put the Owls down 2-0, a deficit which they hadn’t come back from to win in fifteen years. According to Lee, he often warns the team against falling into that exact scenario.

“Sometimes when we get down a goal and come back, I tell [the team], ‘great job, I’m proud of our toughness and grit, but we’re not always going to be able to do this, because sometimes you’re going to do down against some really good teams [who aren’t going to let you back into the game],’” Lee said. “Tonight we went down two goals against one of the best teams in the country, and one of the all time great soccer programs, and to come back from two-nil down was huge.”

Rice managed to get back into the game with less than a minute remaining in the first half, when junior Delaney Schultz scored to cut the Aggies’ lead to one. Just over 11 minutes into the second half, senior defender Mijke Roelfsema caught the A&M defense off guard by firing a shot from midfield, which found the net and tied the game at 2. Both teams were held scoreless for the final 30-plus minutes of regulation, sending the game into overtime.

While the Aggies were on the attack for much of regulation, with 31 shot attempts compared to 14 for Rice, the Owls out shot the Aggies four to one in overtime. Then, with just 17 seconds left in the 10-minute overtime, Page scored off of a Schultz corner kick, putting the Owls ahead as time expired.

“Good for Caleigh Page,” Lee said. “She works so hard, she’s played a different role for us this year, and she’s been so steady wherever we put her. She had a fantastic game tonight and a deserved game winner.”

The win improves the Owls’ record to 5-2 on the season. The team will resume their conference schedule against Louisiana Tech on Friday. They are currently 1-1 in the conference play, and in fourth place out of the seven teams in the Conference USA western division.