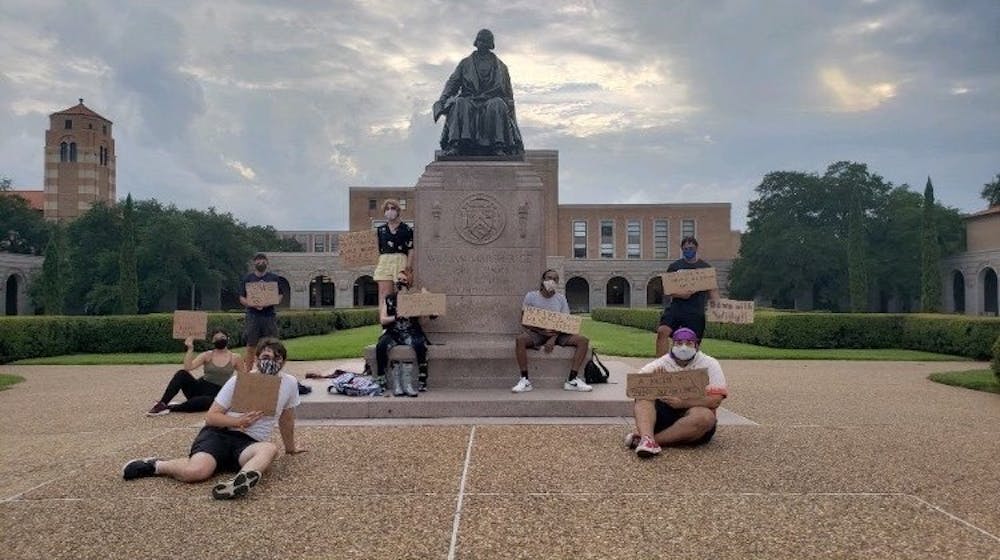 Schachter (leftmost standing) participates in a protest at the Willy Statue.

The Task Force on Slavery, Segregation, and Racial Injustice asked Student Association presidents on March 7 to send out a survey regarding Willy’s statue to college presidents, who were asked to send it to their respective college students. The survey asked if the statue of William Marsh Rice should be removed from the Academic Quad and asked how they reached that answer. Responders were instructed to write as little or as much as they would like.

The task force also sent surveys concerning Willy’s statue directly to Rice alumni, staff and faculty and clarified in the email to alumni that ‘no university decision has been made concerning the memorial.’

The co-chair for the Task Force on Slavery, Segregation, and Racial Injustice, Alexander Byrd, asked Kendall Vining and Anna Margaret Clyburn, the incoming and outgoing Student Association presidents, to send a survey concerning the founder’s memorial to the student body, according to Vining.

Vining said that they then sent the survey to both outgoing and incoming college presidents to distribute, and the next monthly campuswide email will also include the survey in it.

Caleb McDaniel, the Task Force’s co-chair, said there were a variety of ways to send out the survey to the students.

“I think we could have had it sent in a variety of ways, including to one or several student listservs,” McDaniel said. “The Task Force wanted to create a space where all members of the community could share their thinking about the Founder’s Memorial directly with our group, and we look forward to reviewing the responses we receive.”

Adam Cardenas, the outgoing president of Baker College, said that he was initially surprised by the task force’s decision to communicate to the student body through college presidents.

“In the past, I know that the task force has sent out their own messages through Rice’s Listservs,” Cardenas said. “But then I rethought the process of getting students involved, and having the messages come from college presidents help to have more people engaged because then [we] have a good representation of the colleges.”

Sarah Mozden, the incoming president of Sid Richardson College, said that she sent out the survey upon receiving it on March 8, but some colleges received the survey later than others.

“I had already changed over so I was the one who decided to send the email, but I was in collaboration with the outgoing president before sending out the email,” Mozden, a junior at Sid Richardson, said. “My guess would be that there was a miscommunication between incoming and outgoing presidents about who was supposed to send it.”

Cardenas sent out the survey to Baker students on March 12 and said that there were no instructions as to whether he or Antoni Yotov, the incoming Baker president, should send out the survey.

“Me and Antoni worked together to make sure the survey got out, but ultimately I sent it,” Cardenas said. “After Wednesday, he’ll take over [dealing with] any feedback.”

Vining said the coinciding timings of the survey and changeover of college governments could have led to these delays and confusion.

“Student leaders are trying their best right now,” Vining said. “Especially with last year, students stepped up in a way that they shouldn’t have to step up. But, given that, I still hope to ensure, especially surrounding equity issues on campus and anti-racism, that people who have been elected into these positions really actively promote and adapt into their actions as they have to perform through their roles.”

Miguel Luna, Coffeehouse general manager, also sent the task force survey out to his employees in an email with additional resources to ensure his employees had the opportunity to complete it.

“I sent out the task force survey to all [Keepers of Coffee because] I heard not all residential colleges got it,” Luna said. “So I felt like it was my duty to include that in the resource section [of the email] for Coffeehouse employees to fill out.”

Vining said that she also successfully submitted a question about Willy’s statue to the survey of all students, which students are required to complete.

“Basically I wanted to ensure that no matter what happens with the response rate that the task force might get from students, I can still use my role as SA president to do something,” Vining said. “I knew that the task force had their own questions, and I didn’t want to interfere with that. But I just felt like as the SA president and as a Black woman, I wanted to include a question [in the SA] to ask the student body about their general thoughts on Willy statue so that it can be used as a resource for other students who then plan to write legislation in favor or against removing the statue, however they decide to do that.”