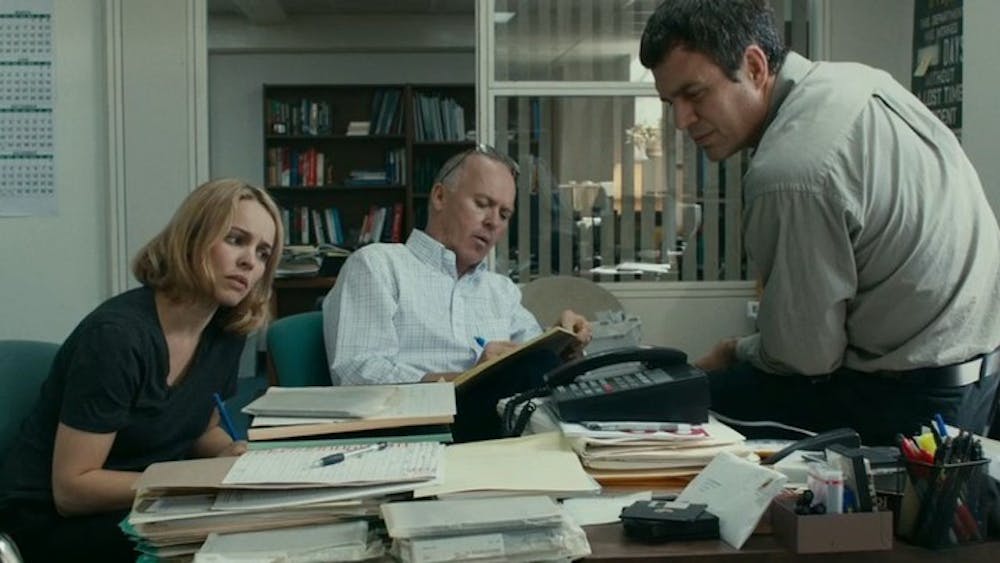 Movies and TV shows based on true crime are about so much more than the crimes themselves — they provide filmmakers with a medium to tell compelling stories of the complex layers of our human condition. Whether heavily fictionalized or strictly factual, these stories are all the same at their core: they point to the shared humanity we all possess, the good and the bad. The result is an expansive genre that is far more artful and diverse than many would think. From serial murder to con men and securities fraud, here are my top 10 movies and TV shows based on true crime.

David Fincher’s “Zodiac” is one of my favorite movies of all time, full stop. The careful, calculated cadence of the film will keep you on the edge of your seat as it recounts the unsolved Zodiac killings that occurred in California in the 1970s. Set largely in San Francisco, its brutality and realism highlights the traumas of a city shaken by the horrors of the crimes depicted. As an inquisitive cartoonist played by Jake Gyllenhaal sinks deeper and deeper into his obsessive pursuit of the killer, we’re forced to confront not only the darkness that’s all around us, but also the darkness from within.

Winner of the Academy Award for Best Picture in 2015, Tom McCarthy’s “Spotlight” is a grounded, cerebral depiction of a team of investigative journalists at the Boston Globe who exposed widespread sexual abuse committed by Roman Catholic priests in the U.S. in the early 2000s. It’s a story told in the intimate confines of local churches, schools and neighborhood streets, and it prompts an honest evaluation of the ways we can be exploited by the faith we place in the communities to which we belong.

Known for his directorial work in comedies like “Anchorman,” “Step Brothers” and “The Other Guys,” Adam McKay blends drama, information and humor in his retelling of the 2008 financial crisis. His lighthearted depiction (bordering on caricature) of big banks, hedge funds and regulatory agencies demystifies the industry and pokes fun at the laughably blatant corruption of these institutions. As intervening celebrity cameos by Selena Gomez and Margot Robbie are used to explain complex financial concepts, the film brings power to the people and airs out Wall Street’s dirty laundry for everyone to see.

David Fincher’s Netflix series “Mindhunter” explores the psychology of serial killers and the investigators who study them as it follows two FBI agents, based on real people, who tour the country interviewing convicted killers in the 1970s. In many ways, it’s a continuation of the study Fincher first began in “Zodiac.” It’s a masterful exercise in detail, as the unique mannerisms and accents of a diverse group of characters create interactions and dialogue that represent a careful give-and-take of leverage, power and control.

Another film set in the Bay Area, “Fruitvale Station” is an indie film that stars Michael B. Jordan as Oscar Grant, a Black man who was murdered by police officers at a train station in Oakland, California. Shot in an intimate, handheld-camera style, the way the film portrays the injustice of his death is heart-wrenching and emotional. As we follow Grant in his last day of life, it serves as a poignant reminder of the ways that racial identity creates drastic disparities in the lives of so many people of color.

Leonardo DiCaprio’s completely over-the-top portrayal of charismatic stockbroker and convicted felon Jordan Belfort in Martin Scorcese’s “The Wolf of Wall Street” is iconic. Narrated based on Belfort’s autobiography of the same name, the film is saturated in the lavishness and degeneracy of a life motivated by greed and excess, driven by memorable auxiliary performances by Jonah Hill, Margot Robbie and Matthew McConaughey. It might be every aspiring fraternity brother’s favorite movie, but DiCaprio and Scorcese ultimately show how money can transform a person and ultimately become the crux of their downfall.

Steve Carrell steps away from his typical comedic role to play eccentric billionaire John du Pont, who recruits Channing Tatum’s Dave Schultz, a national champion wrestler, to train with him at his estate. The film builds tension brilliantly in the back-and-forth between the two, and Carrell’s creepy and unsettling performance only heightens the drama as the film moves toward its deeply cathartic yet inevitable end.

In this film by Steven Spielberg, a young Leonardo DiCaprio plays Frank Abagnale Jr., a real-life con man who impersonates a doctor, lawyer and commercial airplane pilot, as he evades capture by FBI agent Carl Hanratty, played by Tom Hanks. Unmistakably a Spielberg film, it is ostensibly optimistic and feel-good in its delivery, and, in exploring Frank’s relationship with both his father and Hanratty, it espouses a heartfelt humanistic understanding of those who commit crime.

As someone who wasn’t alive when it happened, this series provides a riveting glimpse into a criminal trial that held the attention and intrigue of the entire U.S. Dramatization and exaggeration are apparent in the stylistic decisions made in the photography and direction, but such an approach only accentuates how the glitzy veneer of a media circus distracted from the complex interplay of race and morality in the events surrounding the murder and ensuing trial.

This Netflix drama, written and directed by Aaron Sorkin, is based on the stories of seven real individuals who were charged with federal crimes for leading  anti-Vietnam War and countercultural protests at the 1968 Democratic National Convention in Chicago. Starring an ensemble cast including Sacha Baron Cohen, Eddie Redmayne and Joseph Gordon-Levitt,, the film is a sharp and polished recreation of the political and legal nuances of a trial that still bears relevance in how we perceive our constitutional rights to free speech, assembly, and legal representation in the U.S. even today.