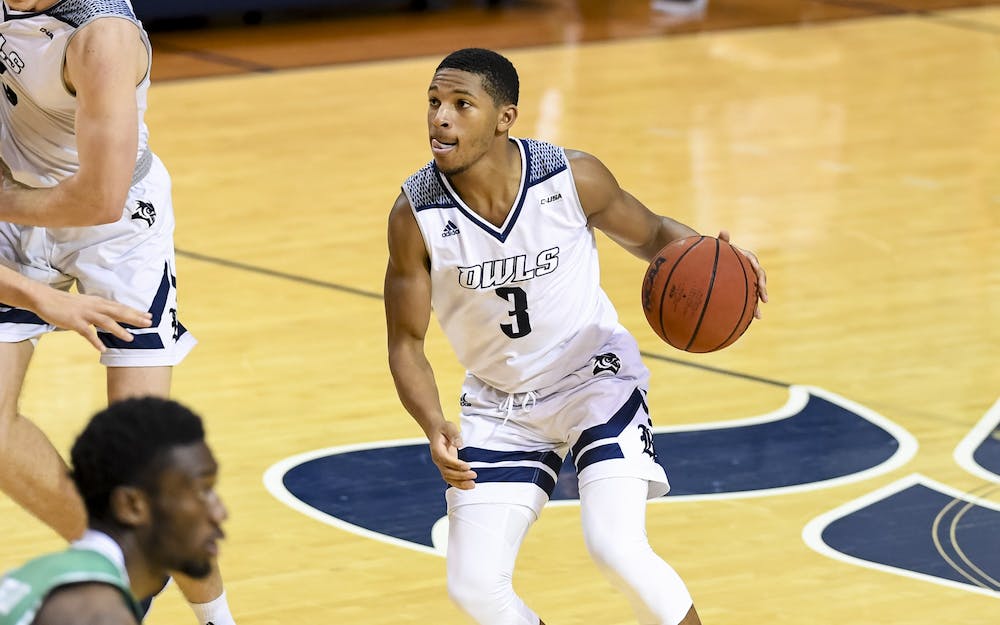 A win tomorrow against the Golden Eagles would mean that the Owls will be able to advance to the first round of the conference tournament against Marshall University, who rank as the No. 3 seed in the EastWest Division. The rest of the tournament is set up as a bracket which includes a long road, with 4 back-to-back games, as the Owls set their eyes on a championship run.

The Owls closed out their regular season with an 80-77 win over Our Lady of the Lake University, who play in the National Association of Intercollegiate Athletics (which isn’t affiliated with the NCAA) on Friday. Previously, the Owls had faced a rough stretch where they were winless for nearly a month, including a loss in their final conference game against Louisiana Tech University, which was originally scheduled to be the final game of their season.

Sophomore guard and 2021 Third Team All-Conference USA member Quincy Olivari believes that their win to close out the season was critical in improving the team’s confidence and momentum.

“We came in wanting to get a win and get some good momentum going into the conference championship next week, so it’s good to get [this] win and it is just good for the team’s spirit [overall],” Olivari said. “We didn’t like the way we played last weekend [against Louisiana Tech], so to get this win and have some momentum going into next week is [a positive].”

With the conference tournament this week, head coach Scott Pera said that despite having great room for improvement, he believes the team is turning the corner as they enter the most important part of the year. Pera believes that, despite only beating a non Division-I opponent by a narrow margin, the team is getting better entering the tournament.

“[Junior guard] Payton [Moore] is coming from COVID-19 and has only practiced for one day,” Pera said. “[Junior guard] Chris [Mullins] was in just his third game back from injury and he is still not the same.  These couple of days and time [off] will help these players get back to who they are and maybe this will serve us well come conference tournament time.”

Pera anticipates that there is plenty to improve on as they prepare for a tough week of basketball.

“Our defense was less than stellar obviously,” Pera said. “[That is] something to work on and we are going to get back at it, and we’re excited for Tuesday’s matchup against Southern Miss.”

The Owls look to extend their season Tuesday at 7 p.m. when they face Southern Miss. Should they win, the first round of the C-USA tournament is on Wednesday against the Marshall Thundering Herd. If the Owls continue to advance, the quarter finals are on Thursday, the semi-finals are on Friday and the championship game is on Saturday.