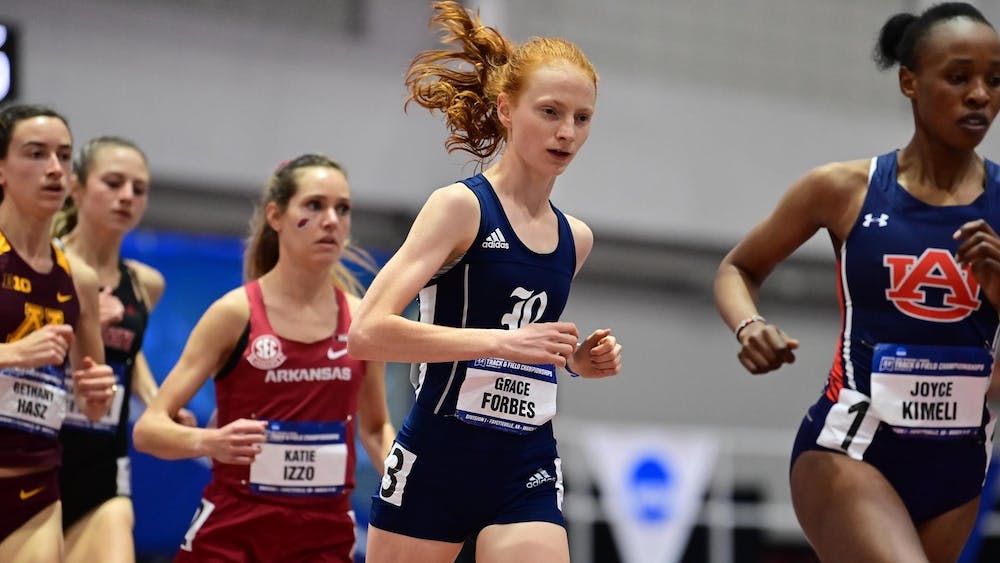 By earning first team All-American honors in the 5,000 meter, Forbes became the first Owl to accomplish that feat since 2016. In that race, Forbes, a sophomore, placed behind only four seniors and one junior. According to women’s track and field head coach Jim Bevan, Forbes showed her toughness by holding her own against more experienced competition.

“[Forbes] ran a gutty, gutty race for it being her first time at nationals,” Bevan said. “She was never out of reach of the lead for basically the whole race. She was one of the youngest in the field. She had the lead with 1,200 [meters] to go. To do that in her first national meet shows what she is made of. I’m just so very, very proud of her.”

Meanwhile, on the field side of the meet, Hicks and Gunnarsdóttir both put up impressive performances in their own right. Gunnarsdóttir took No. 11 place in the shot-put with a throw of 16.44 meters, a throw that fell .51 meters short of the personal best she had established at last month’s Conference USA championships. According to Gunnarsdóttir, while she is disappointed she couldn’t match her personal best, she is motivated to improve going forward.

“It was a great experience getting to compete at nationals,” Gunnarsdóttir said. “Being surrounded by the best athletes in the NCAA is something really special. I know I could have done a lot better, but it gives me the drive to work harder and do better this coming outdoor season.”

Hicks ended in No. 14 place in the hammer throw with a throw of 20.62 meters. Hicks managed to accomplish this in his first appearance at the NCAA championships. According to Hicks, the lack of spectators due to the pandemic took away some of the pressure of competing at nationals.

“Because spectators weren’t allowed, the experience felt more like it was just another track meet, except we’re the best in the nation,” Hicks said. “So even though it’s the NCAA championships, it felt like a bunch of really good throwers got together to throw with no pressure or nerves and nothing to lose.”

Hicks said that, despite these changes to the event, just getting to compete was rewarding in its own right.

“We had worked hard all year, and we thought our only meet [of the] indoor season would be the conference championships, so I was happy when I won that meet and set the school record,” Hicks said. “[That put me] on the edge of qualifying for nationals, and when I qualified the next week, it was way more than I could’ve asked for this season. We worked hard and didn’t know what to expect, and I’m grateful that this was the result.”

Just three days after the conclusion of the track and field championships, Forbes traveled to Stillwater, Oklahoma to compete at the cross-country championships. According to Forbes, the quick turnaround between meets made for a challenging few days.

“This weekend was really tough,” Forbes said. “I had a rather odd 5k Friday night. [Monday] was definitely a really tough race. It was by far the hardest course I’ve ever run, but I’m happy that I held on and was able to secure an all-American spot. I am happy with my performances but relieved that the very stressful weekend is over.”

These performances cap an impressive run for Forbes. Just three weeks ago, she earned United States Track and Field and Cross Country Coaches Association national indoor track athlete of the week honors for her meet record-breaking performance in the mile at the Conference USA Championships.

The Owls now turn their attention to outdoor track and field season. The outdoor season got off to a good start last week, with a second-place finish at the Longhorn Invitational meet at the University of Texas, Austin.