Out of the shadows: “Electrifying Design” celebrates century of light 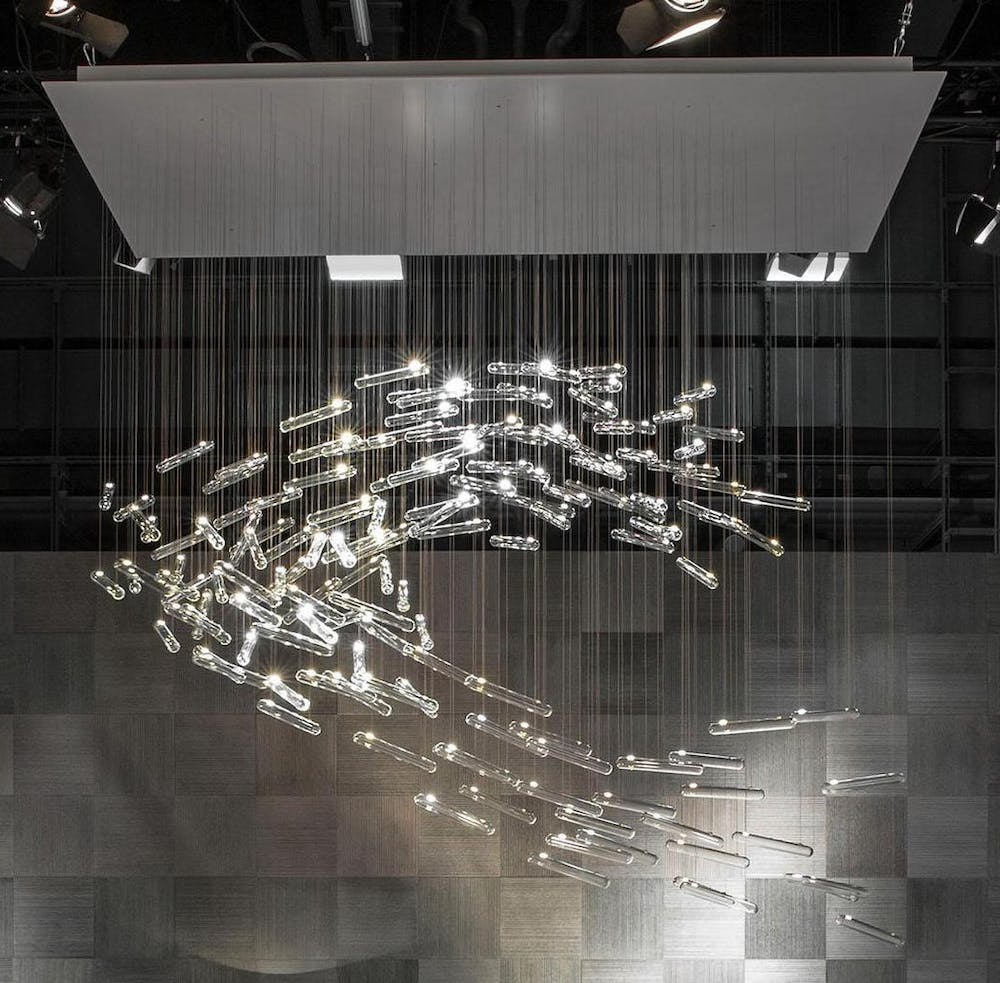 Just days after the city of Houston was in its most desperate need of light, the Museum of Fine Arts Houston unveiled an unparalleled beacon of brilliance. “Electrifying Design: A Century of Lighting” opened last week as the first large-scale U.S. exhibition to examine both the technological and artistic innovations in international lighting design. Through three thematic galleries, audiences are invited to see lamps, chandeliers and the humble bulb in a whole new light.

In her opening remarks during a press event on Saturday, Feb. 27, co-curator Cindi Strauss referenced Winter Storm Uri, the devastating storm that rendered the state of Texas powerless and water-less amidst historic freezing temperatures. “Electrifying Design” was supposed to open alongside the museum’s special exhibition, “Hockney — Van Gogh: The Joy of Nature,” on Saturday, Feb. 20. However, with uncertainty about the capacity of Houston power grids to support an entire exhibit fundamentally dependent on electricity, the opening was delayed. In the wake of a storm that has left dozens of people dead, thousands with property damage and millions with traumatic memories of shivering in the cold — amidst a pandemic that has claimed half a million lives in the U.S. and continues to ravage the world — Strauss said the light and hope embodied in “Electrifying Design” is precisely what we need.

Strauss and her fellow curators faced extraordinary complications with transporting and installing the rare and fragile objects on display, which range chronologically from the 1920s to 2020. As design historians, Strauss and co-curator Sarah Schleuning identified the U.S., Europe and Japan as pioneers in the last century of lighting design, having led the world in its innovation from the first electric lights in the early 1800s to LED bulbs in the 21st century. Needless to say, the range of wiring and electrical components necessary to make this exhibit shine has taken just as much expertise from electricians as curators.

Before viewers even enter the gallery space, they are greeted with “Mega Chandelier,” an overwhelming amalgam of various lamps and light fixtures that combine to create an ambitious and glamorous display of light.

Rather than offering a simple historical survey of the evolution of lighting design, the exhibit is divided according to three thematic lenses: “typologies,” “the bulb” and “century of light.” The typologies gallery is centered on the different functions of light fixtures. The fixtures located in this first gallery may look like regular IKEA fodder at first glance, but closer examination of their individual histories prompts appreciation for the 100-year-old creations that have quite literally served as the blueprints for today’s desk lamps. Suddenly, each curve and contour in the fixture renders a lamp into art.

Make no mistake, though — the vast majority of these appliances are unlike anything you could find on a furniture display floor. From a lamp that looks like a neon orange teardrop spiraling down from the ceiling to a black balloon-animal-like chandelier that looks like a rough sketch come to life, the typologies gallery expands the way we think about the function and form of light in our everyday lives.

The second gallery includes pieces that accentuate the bulb itself — Strauss said that one of the goals of the exhibit is to focus on light bulbs as objects in and of themselves, rather than only thinking about their uses. In this section, the light bulb is no longer the mundane, hidden appliance we take for granted in our daily lives. Rather, viewers are transported into the mindset of those who first heralded the invention of light over 100 years ago, and the bulb emerges in dozens of electric artworks as a brilliant spectacle of both technology and art.

This section of “Electrifying Design” is home to the exhibit’s crown jewel, “Flylight”: a cluster of dozens of tubular, hand-blown glass bulbs hung from the ceiling that lights up when viewers move under and around it. DRIFT, the studio that produced the site-specific interactive installation, writes that the light is meant to mimic the behavior of a flock of birds in flight, and symbolize the conflict between the safety of the group and the freedom of the individual.

The final gallery focuses on the psychological and emotional impacts of light that emerge from diverse and innovative designs. The pieces in this gallery play with reflection, shadows, direction and space as alternative avenues for understanding and engaging with light. Fixtures from the 1960s and ’70s especially exhibit creative liberties that were taken with the color and shape of light fixtures to enhance a particular mood or atmosphere, from funky neon purple and red ring lights to a chandelier made of broken plates and cups — seemingly caught in the midst of shattering with a warm light emanating from its center. If there is anywhere the design enthusiast might faint with awe and admiration, this gallery might be the place.

With “Electrifying Design,” viewers are invited to take another look at the electrified filaments we sometimes take for granted, and recognize a vein of artistic and technological ingenuity that Strauss contends has not received the respect and attention that it’s due. This exhibit reminds audiences that there is poetry in utility, and untapped wonder in our everyday.

“Electrifying Design” will be on view at the Museum of Fine Arts through May 16, 2021, and is included with general admission. Co-curators Cindi Strauss and Sarah Schleuning will discuss the exhibition’s themes, organization and key works during a free virtual talk this Sunday, March 7, 2021 at 3 p.m. CST. Register here.