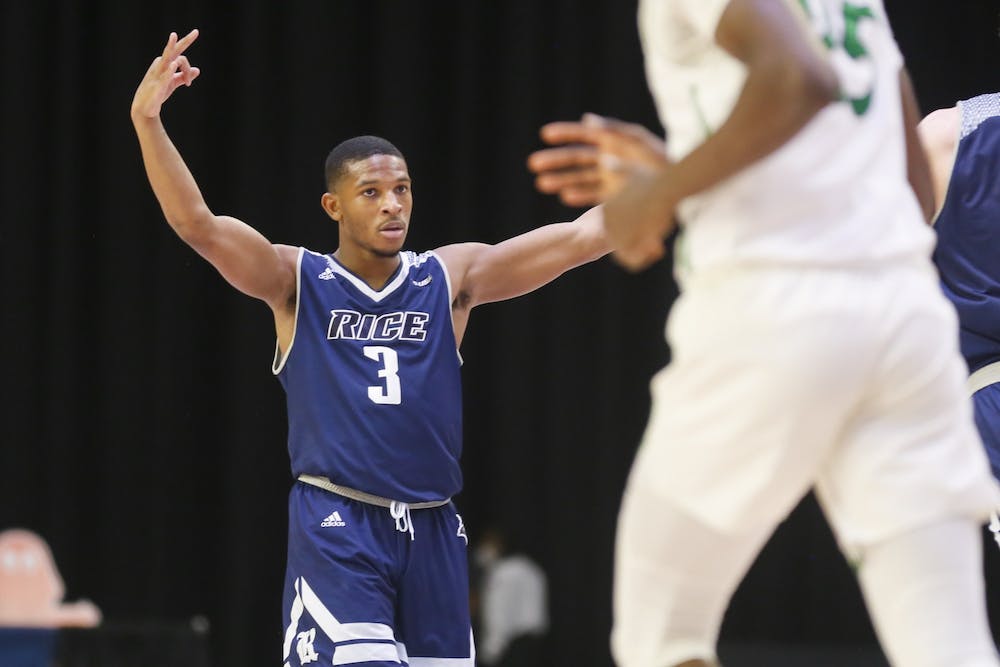 The “Cinderella story” continued last night, when Rice men’s basketball defeated No. 3 Marshall University 72-68 in the first round of the Conference USA tournament. After coming in as the second-lowest seed in the West division and defeating the University of Southern Mississippi in the preliminary round, the Owls showed that they have what it takes to make a deep run into the tournament.

After the game, head coach Scott Pera was ecstatic with the win and how his guys performed, and as he pointed out, winning is that much sweeter as the underdog.

“Anytime you beat a quality program and team like Marshall, you’re happy,” Pera said. “Especially when you're in the process of building a program.”

The Owls got off to a slower start and trailed the Thundering Herd until late in the first half. Both teams exchanged buckets, and the Owls had a two-point lead entering the half: up 31-29. After the break, the Owls turned up the intensity and went on two, 8-0 scoring runs, led by sophomores Max Fiedler and Quincy Olivari. The Owls kept their foot on the gas and capped off an exciting second half with an impressive late showing from the free-throw line, making nine of 10 free throws in the last minute, to seal the win.

A solid team effort on both sides of the court was crucial for the Owls today. Olivari and Fiedler led the offensive effort with 23 and 15 points, respectively. Pera was thrilled with how the Owls handled their defensive assignments.

“I think a bunch of guys [contributed] for a bunch of different reasons,” said Pera. “Everyone looks at the scoring, but how about [freshman] Cameron Sheffield’s effort on [Marshall’s junior guard] Taevion Kinsey, the future NBA player, [holding him to] five for 15 [shots from the field].”

Pera also was pleased with how the team handled in-game adjustments, which proved to have a large impact on the game.

“Our kids really picked things up in the huddle, and really well out of timeouts,” Pera said. “We got a good backdoor lay-up to Quincy [Olivari] out of the time-out, we got [sophomore guard] Travis [Evee] a big three that really helped us out of a timeout [as well].”

As Rice advances to the second round, they will play the No. 2 University of Alabama at Birmingham on Thursday at 6:00 p.m. This is the first time the Owls have won two games in the C-USA tournament since 2007. Although the Owls lost both games against the Blazers in the regular season, Pera is optimistic about this game because of one player, in particular.

“We didn‘t have Travis [last time we played them], so we were a different team,” Pera said. “You’re talking about a 15-point-per-game scorer. But we [also] need to look at some of the things they did that caused us trouble, some of the things we did that made us successful and see if we can guard them a little better than we did last time.”

The Owls look to carry their momentum forward and continue their impressive march through the C-USA tournament. Overall, the team is playing well when it matters and enjoying playing in the most important month in college basketball: March.

“You can tell it’s March,” Pera said. “You miss the big crowds, but you can tell it’s important, and our kids are having a great time because they're locked in and engaged. It's fun to win some games in March.”