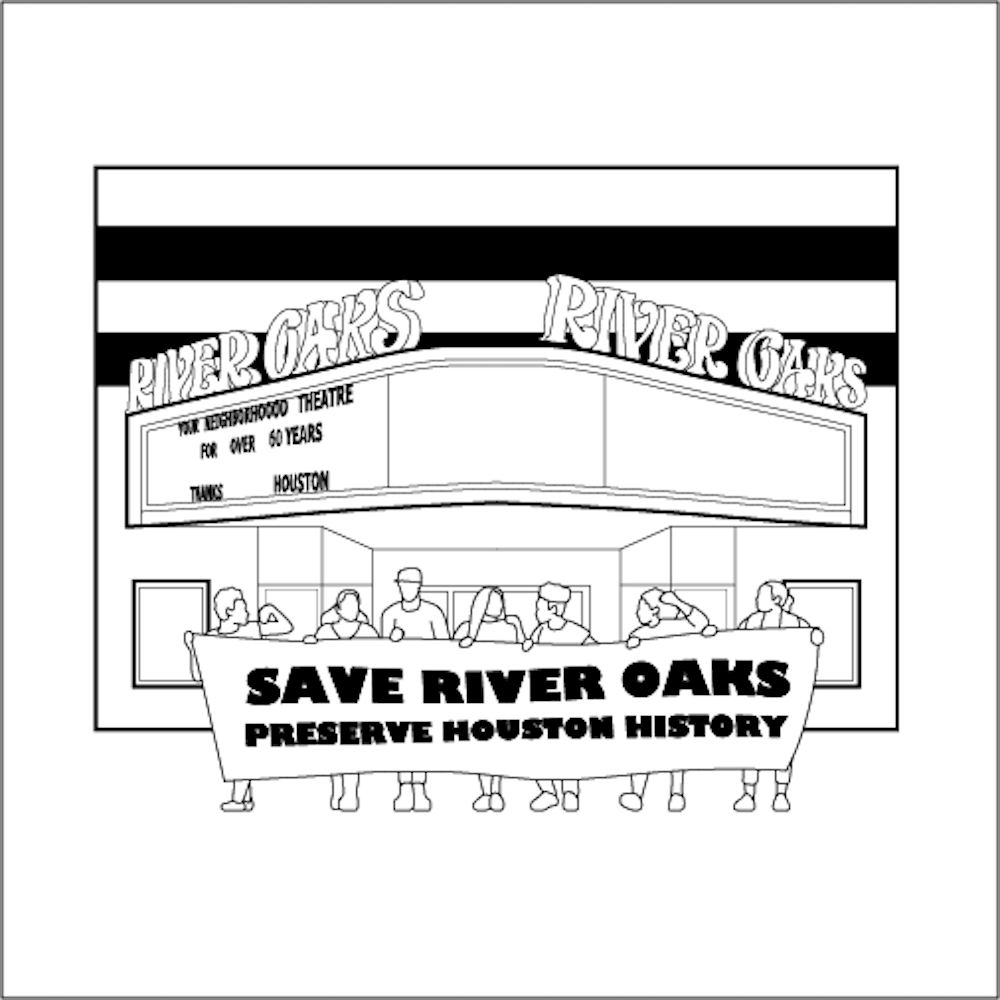 The River Oaks Theatre, a historic art deco cinema from the 1930s located at 2009 West Gray Street, is at risk of permanent closure after being unable to pay rent to Weingarten Realty for a year during the COVID-19 pandemic. Two Houston organizations, Artists for Artists and the Houston Film Critics Society, are working to prevent the cinema’s closure.

River Oaks Theatre opened on Nov. 28, 1939 as an addition to the River Oaks Community Shopping Center. The center was designed to serve the River Oaks subdivision, a restricted community owned by the Hoggs and Potters. This community initially excluded minority groups such as African Americans and Jews and to this day is mainly made up of white individuals.

During its 82 years, the theatre has gone through many changes in ownership, with a notable change occurring in 1976 when the cinema was bought by Landmark Theatres and eventually began showing independent and foreign films.

Doug Harris, president of the Houston Film Critics Society, spoke in favor of protecting the rich history and positive memories associated with the River Oaks Theatre.

“The clock is ticking,” Harris said. “Allegedly, March 31 is the deadline [for saving the theatre] so people, if they're going to take action, they need to take action. And granted, on a larger scale, I would like people to do what they can to preserve the theater-going experience.”

“We thought that was the best way to demonstrate that the public does care about this theater and more importantly, they will pay for it,” Harris said.

“What really needs to happen, I think, is for the major tenants in this area — that would be Kroger … Perry's Steakhouse and Grille on West Gray, Barnes & Noble, Starbucks, La Madeleine — those tenants need to speak up and say, ‘Listen, we like having [the River Oaks Theatre]. This is a part of a community. This is what makes living here attractive to people.”

Harris brought up the importance of physically going to a theatre, as it brings with it a sense of community.

“When you go into a movie theater, particularly the River Oaks, you can disengage like few other places, turn off your phone, if you're polite,” he said. “You're sitting in the darkness with like-minded people that you don't know, your focus is on the screen and the story. And you just have to disengage. And that's an incredible therapeutic effort, when you're just trying to clear your head and experience cinematic art.”

Harris said that his parents used to go to the River Oaks Theatre when they were dating because it was affordable entertainment and had air conditioning, unlike many other businesses at the time.

“I don't know anybody that doesn't have some connection to this thing. Either their parents went there, or they saw a movie, a pivotal movie of their youth,” Harris said.

River Oaks Theatre currently shows only foreign and independent films. Some films that were previously screened include “Malcolm & Marie,” “Supernova” and “Dara of Jasenovac.” Current showings include “The Father,” “Nomadland” and “Minari.” Many of these films represent historically marginalized groups such as BIPOC and LGBTQIA+ individuals, illustrating the stark contrast between the theater's racially discriminatory past and its inclusive ethos today.

In an article by CultureMap Houston about a March 7 protest against the theatre’s closing, an 18-year-old member of the audience noted that they had been going to see the Rocky Horror Picture Show at River Oaks Theatre since they were 13. It is the only theatre in Houston that regularly shows the Rocky Horror Picture Show, a film of importance for the LGBTQIA+ community.

“As these [historic] theaters vanish one by one, we're losing a chance to see films that you can't see somewhere else,” Harris said.

Many Houstonians have been asking what they can do to help prevent the River Oaks Theatre from closing. Patrons may buy tickets to in-person movie screenings at the theater, which is open at half capacity, enforcing COVID regulations and mask use, or write Mayor Sylvester Turner to ask for help in negotiating an agreement between Landmark Theaters and Weingarten Realty.

“When the doors are open again, I hope people will return to the theaters and support independent film and international film, which has been the stalwart of the Landmark and some of these other theaters for a long time,” Harris said.

For more information about current showings at the River Oaks Theatre visit landmarktheatres.com/houston/river-oaks-theatre