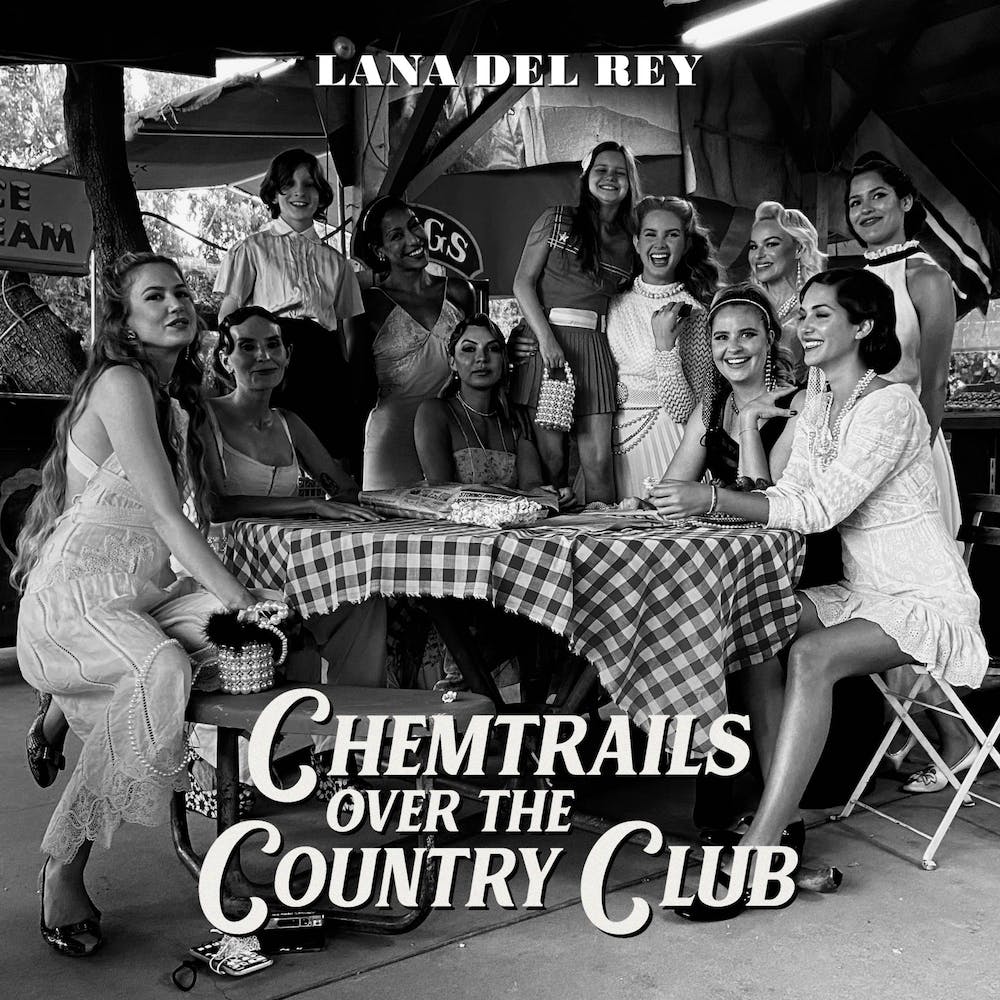 One would imagine that it would be hard to release a record that could top the monumental critical success of Lana Del Rey’s last album “Norman Fucking Rockwell!” They would be right. Her latest project, while a valiant effort to return to Del Rey’s roots and explore storytelling à la Taylor Swift’s “folklore” or “evermore,” fails to live up to its predecessor and doesn’t quite have that same social context to hit the cultural impact that Swift’s work had. And that isn’t even considering the mess of controversies Del Rey has entangled herself in since “NFR!” While Del Rey’s seventh studio album “Chemtrails Over the Country Club” satisfies fans of the singer’s more stripped down sound, the project doesn’t hold a candle to its Grammy - nominated predecessor and unfortunately can’t escape the shadow of Del Rey’s recent controversies.

Now, Del Rey has emphasized that she wishes critics would focus on just her music and not her personal life. However, when discussing Del Rey’s music, it would be irresponsible to ignore the missteps she has made recently. The social context of this album’s release is extremely important and does affect the art itself, no matter how much Del Rey would like to believe it doesn’t. If she actually read this article, it would probably infuriate her, which is part of the problem.

In May 2020, the songstress posted an open letter on Instagram titled “Question for the culture,” in which she lamented her treatment by the media as a glamourizer of domestic abuse, among other things. The now infamous crown jewel of the letter was a list of other women singers who she implied sang about sexually explicit or socially taboo topics just as much or more than she does  but are treated better by the media and fans.

Most of the singers Del Rey listed in her letter were Black women who have certainly experienced plenty of racist and sexist criticism and harassment from the media throughout their careers, though the singer denies intentionally choosing those particular artists based on race. After Del Rey refused to apologize for her willful ignorance and continued to dig herself further into a hole by posting more letters and comments that bordered on racial color blindness and extreme internalized misogyny, it seemed like her career was spiraling downwards very quickly. Since then, Del Rey has gotten herself caught up in many more controversies, namely by getting defensive about accusations of cultural appropriation, a huge shift from her former persona as the liberal witch who hexed Donald Trump to fail on his inauguration day.

Putting her reputation in context, we get “Chemtrails Over the Country Club,” a soft collection of crooning ballads and memories. I sit on my bedroom floor, taking it in through the speakers of a record player, the true Del Rey listening experience. It opens with the album’s latest single, “White Dress,” a beautiful song that hears Del Rey straining to hit high notes in the best way possible. The lyrics, however, tie back into her controversies in a very tone deaf way. Reminiscing on how she “felt seen” as a young performer at the “men in music business conference” harkens back to one of Del Rey’s earliest criticisms: romanticizing a reliance on men in order for women to succeed. It is a small part of the chorus that gets no elaboration, but it stands out just enough that it is impossible to go into the rest of the album without cringing.

From there we hear the title track, a pretty but ultimately skippable song that gets repetitive as it draws on about Del Rey’s astrological signs. Next, we hear “Tulsa Jesus Freak,” where Del Rey shows off her master storytelling skills, spinning the tale of a group of Christian fanatics encouraging a man to give himself up to a higher power, while also enabling his alcoholism. It is a highlight of the album, if only for its world-building.

The latter part of the album begins with “Dark but Just a Game,” one of the best songs I have ever heard from Del Rey. It has this twitching beauty and excitement to it that has become somewhat of a signature part of her collaborator, the great Jack Antonoff’s, production. The meaning behind the song is not totally clear, but lyrics like “The faces aren’t the same, but their stories all end tragically” and “We keep changin’ all the time / the best ones lost their minds” give a mild sense of a reflection on fame, particularly the way it takes people down — much like it seemingly did to Del Rey following her letter.

From there, Lana takes a step back from the spotlight and lets her featured artists take center stage. Though not credited, there is a noticeably different voice with an almost country twang on “Breaking Up Slowly” that I would be shocked to find out is Del Rey herself. Nikki Lane is listed as a songwriter alongside Del Rey, so it might be her. Either way, the foray Del Rey takes into the Western genre here sounds good, but only because it isn’t Del Rey herself experimenting with the twang.

And finally, Zella Day and Weyes Blood assist in the closing track “For Free,” a very calm and contemplative ending to an equally calm and contemplative album. If “NFR!” was Del Rey’s version of a grandiose, highly romantic, career-defining album, “Chemtrails Over the Country Club” is her quiet return to tradition of understated, melancholic storytelling. There are no swelling strings or intertwining synths; mostly just a guitar and a voice. It is beautiful and peaceful, something Del Rey has always been good at, but ultimately fails to surpass its older sibling. Its reception will probably be hit hard with criticism over its creator’s recent statements, but I still believe it has a place in the current public cultural consciousness. While I was much less disposed to liking this work because of her controversies, I still must admit that it’s a good album. It isn’t “NFR!” but it is good. Let’s see if her next project, “Rock Candy Sweet,” coming June 1, can do any better.