Black Art at Rice: A Conversation With Milkessa Gaga 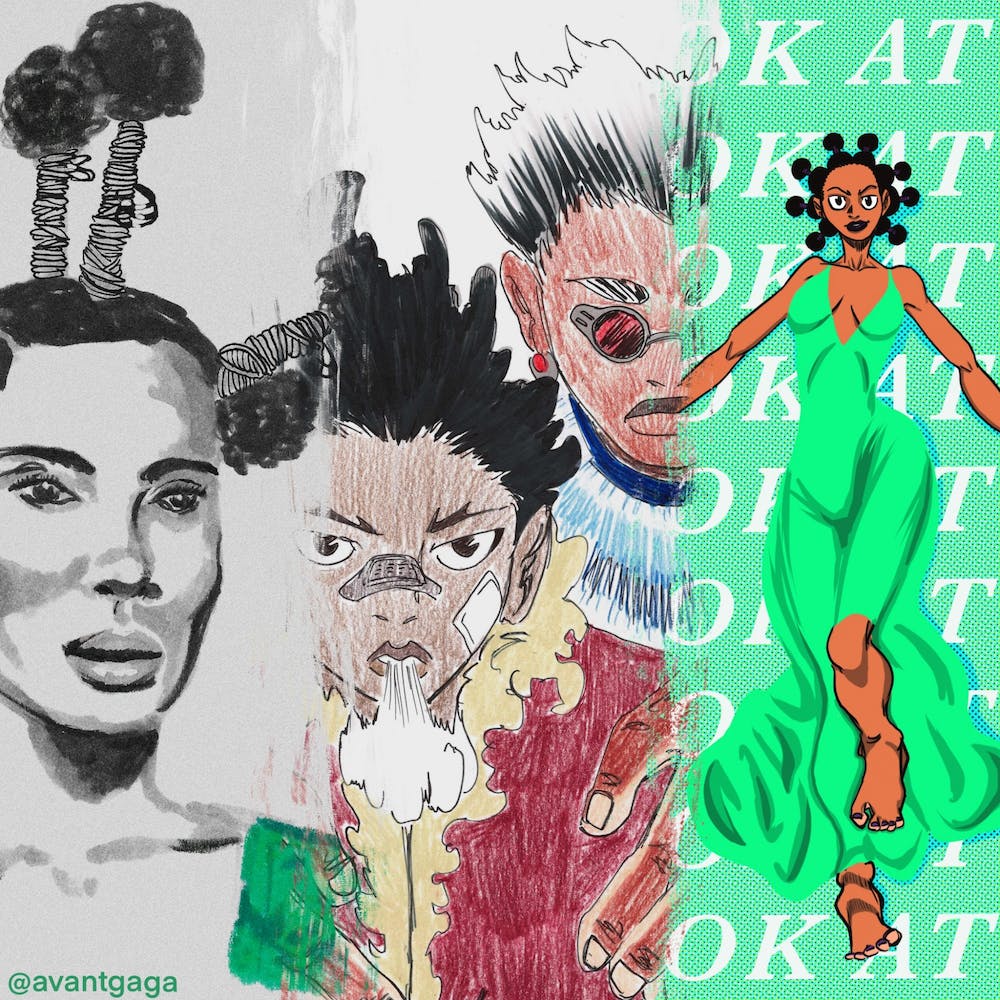 Milkessa Gaga (Martel College ’22) challenges norms within the realm of Japanese art by creating manga as a Black artist. Drawing inspiration from comics such as “Naruto,” “JoJo’s Bizarre Adventure” and “My Hero Academia,” he constantly integrates new techniques to refine his artistic style, and often shares his work on Instagram (@avantgaga). Unfortunately, because of the lack of Black creators in this field, manga and anime often depict Black characters with racist stereotypes. As a result, Gaga is passionate about uplifting other Black artists and hopes to someday create his own comics to reimagine manga in the image of Blackness.

Rice Thresher: When did you first begin making art?

Milkessa Gaga: I’d say it started when I was in fourth grade. I remember I was in the library, and I came across the graphic novel section, like the comic book section. And I saw there was a book called “Naruto.” I didn’t really know what it was too much, I might have seen it on TV a couple of times, but I didn’t know much about that type of stuff. But then I started to read it, and then one day, I just had the idea of trying to draw Naruto. And then I just would repeatedly do that, over and over and over again, and that evolved on to drawing other characters. So that's probably kind of my origin story.

RT: Could you describe your current style or form of art?

MG: I’d say my current style is a mix of my favorite artists, or artists that have inspired me. I remember when I was starting out, because I read “Naruto,” I tried to imitate that artist’s style, Masashi Kishimoto. And then as I started to read different series, I might try and take things here and there. So currently, I’d say my art is influenced by Hirohiko Araki, the creator of “JoJo’s Bizarre Adventure.” Takehiko Inoue is also one of my favorite manga artists, so I'd say there's some influence from him as well. Maybe some “My Hero” influence, Kohei Horikoshi. So yeah, I’d definitely say my style has definitely been influenced by a lot of different manga artists and different animes that I’ve seen over the years.

RT:  What is the most fulfilling experience you’ve had in art?

MG: My comics professor, I had Sperandio … one related to that class was the final project, we had to make a 16-page mini comic. And that was a process. After I was done, you see the finished product and you have to go through writing the script, and editing it, and then doing the thumbnail sketches, and the draft and then finally putting it all together was very rewarding. And then as an added bonus, I can make a bunch of copies of it and sell them to my friends. I remember one time, there was some sort of art expo that our professor had told us about that'd be happening. And he said, “Oh, if you want to, you can come by the place and sell your art there, too.” So I also went over there, and really just got to share my art to the few people that came by or was interested. Yeah, definitely being able to make something and then share it with people, share it with your friends and tell them all, “This is really cool,” and support you in that way is, I’d say, probably one of my standout fulfilling moments with my art.

RT: How has art helped you personally so far?

MG: Now, it has just formed a habit. Anytime I have a paper or a pencil in front of me, I just have to draw, whether that'd be in the middle of class, or just if I'm bored. It's definitely something that I have a passion for. I don't mind spending time working at it to get better, or just doing it to pass the time. I also use it just sometimes as a way to get my mind off something or if I'm stressed. A little over a year [ago] now, I created an art page on Instagram, and that's also been a cool experience, because that allows me to share it with other people and have them see my art and enjoy it as well. So I greatly appreciate what art has done for me, and the outlet it's been for me to just express myself. I hope that people who see my art also get something out of it as well.

RT: What challenges have you had to overcome over your artistic journey?

MG: When I was younger, as a kid, you just think you can do anything. I remember, after reading so many mangas, like, “Oh, I want to be a manga artist as well.” And then when I hit freshman year of high school, it was just kind of setting in that, oh man, this is something that's really tough. Just art in general, making a living off of art in general is very difficult, and me having a dream to be a manga artist is way out there. I was like, man, this is not really possible. I'm not that good. I can't really do that. And so I didn't really draw as much as I'd used to, from freshman year of high school, and then it wasn't until maybe senior year, where I decided to buy a small sketchbook that I could put in my backpack and take wherever I went. And so ever since then, I just started to be more intentional again about my art, and making sure that it always has a presence in my life. I'd say I still have those thoughts about, “Oh, it's not really possible.” To make a living, it's really hard. If I wanted to do art as a profession, I'd have to supplement it with something else, or have it just be a side hustle. So I'm still trying to figure that out.

RT: Do you have any thoughts on the representation or visibility of Black visual artists, specifically for manga?

MG: From what I see in manga and anime, I don't really see too many Black creators. There's a Black manga artist, his pen name is Whyt Manga, and I remember finding him on YouTube, and he'd have tutorials on how to create manga, and how to draw all these different things. And so that was just cool to see, I'm seeing a Black person in this field, making a living out of it. And he's a part of a U.S.-based manga company called Saturday AM, and their whole thing is like diversity. They want to have diversity not only in their stories, but diversity in the artists that they employ. So that's like something really cool to see. And also, on Instagram, I make sure to follow different art accounts by Black artists, and they definitely inspire me to continue to draw and take things from their style. Also, with manga and anime, a lot of the times when I'm watching it or reading it and there's a Black character, they'll say really insensitive things or the depiction of Black characters is just way off. It basically looks like something you'd see in a blackface minstrel-type show, and their personalities are very stereotypical. For example, Killer B from Naruto: I like his character, but they made it seem as if he could only talk in raps. You see a Black character and they totally mess it up and have their characters be so stereotypical and racist. To be honest, that will usually take me out of the experience if I'm invested in a show. Once something like that pops up, I just have to stop for a second and be like, “That wasn't okay.” But it's something that I've come to expect now. I don't really expect manga and anime to depict Black people accurately unless Black creators are doing it for themselves. So that's definitely another one of my motivations for wanting to pursue art in this way.

RT: Do you have any advice for aspiring Black artists who are interested in comics and manga? Or if you could go back in time and tell yourself a piece of advice, what would it be?

MG: I think it is important for Black artists to find people that support them and give them confidence. I know from growing up in an immigrant house with African parents, art was definitely not something that was encouraged. It was seen as a waste of time, but I can't blame my parents for thinking that way. They grew up in a harsh environment, so when they came to America they wanted their children to have all the opportunities that they didn't have, and so excelling in school was always reinforced into me as a kid. I should add it's not like my parents were totally unsupportive. I still remember when my mom bought me my first real art supplies when I was a kid, they were a pack of Sakura Pigma Micron pens, and all these years later I think I still have some pens from that specific set. So find those people that will tell you to keep going, because you can only push yourself so far. It always boosts my mood when I post on my art account and see a comment telling me that they thought my art was cool or that someone shared it on their story. As a Black artist, or honestly just artists in general, I feel like you should be responsible and aware about the type of art you create. Are you promoting any harmful stereotypes in your art? How do you depict Black people in your art? Whose stories are being told? When you create art and share it with others, I believe you are sharing a part of yourself. I don't think you can separate the art from the artist. You should be responsible for what you put out into the world and always be open to hearing critiques.