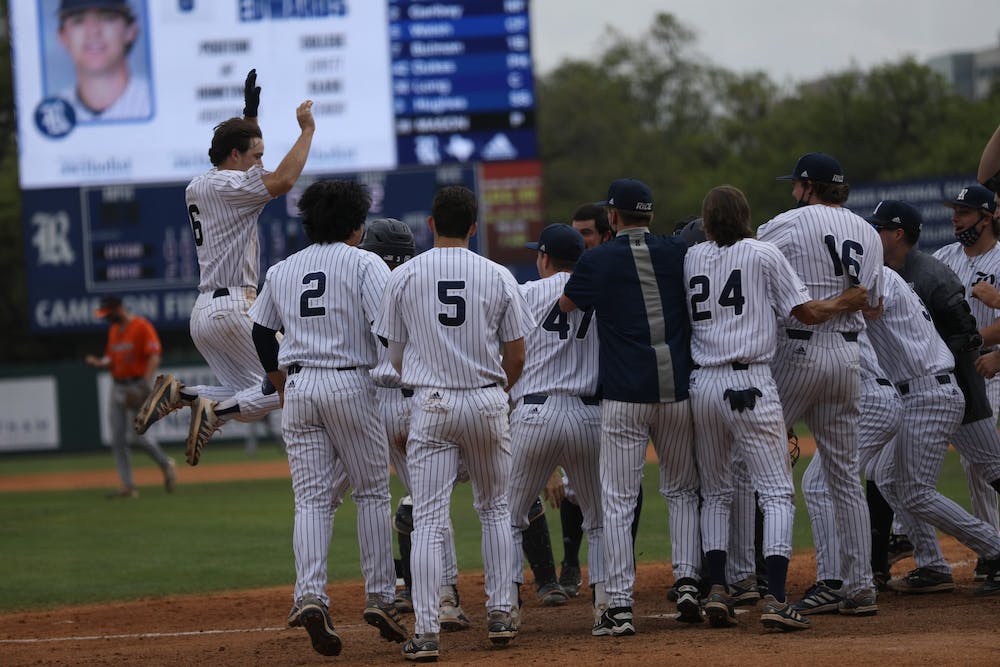 In their first conference series of the season, Rice baseball dropped three of their four games against the University of Texas, San Antonio this weekend. Over the four games, the Owls were outscored 39-18, and their season record now sits at 12-12. Head coach Matt Bragga said he was disappointed with the team’s uncharacteristic mistakes on the mound and in the field over the weekend.

“We fielded horribly all weekend,” Bragga said. “When you just keep giving bases away, wild pitches, passed balls, hit batsmen, walks and errors, it's not going to go well. It was uncharacteristic defense for us this weekend. We’ve got to be better.”

On Friday, the Owls lost the first game of the series in a 16-4 blowout.  The Roadrunners got out to a quick start in the the first inning, with five runs in the top of the frame. The Owls fought back, putting up four runs in the bottom of the first, including a three-run home run by freshman outfielder Guy Garibay, but the Roadrunners scored 11 unanswered runs over the following eight innings.

On Saturday, the Owls got out to an early lead, after Garibay’s fifth homerun of the season. After a rally by the Roadrunners, the Owls were down 8-4 entering the bottom of the seventh (and final) inning. After three Owls runs brought the game within one,  senior infielder Cade Edwards hit a walk-off three run homer over the left field wall, securing the Owls’ only victory of the weekend.

After the game, Bragga said he was thrilled with not only the walk-off but with how his team fought back to take game two.

“[The walk-off] was spectacular,” Bragga said. “That was fighting and coming back when you needed to, from a big deficit, and it was great to see [Edwards] do his job.”

The Owls hoped to continue their hot hitting streak in the second game of their Saturday double-header, but were foiled by strong Roadrunner pitching. The game ended with a 4-1 score, with the Owls falling behind early and unable to close the gap.

On Sunday, the Owls' struggles continued as they lost the fourth game of the series 11-3. The Roadrunners took the lead in the first inning, capitalizing on a fielding error by the Owls, and never gave it up. On the offensive side, the Owls outhit UTSA 10 hits to nine, and Edwards added on to his solid weekend with a three-RBI double in the second inning.

After the Sunday series finale, Bragga said he was happy with the teams’ production, but he still wants to see improvements on the defensive side and hopes to prevent future errors.

“We out-hit UTSA today which was good, but we gave away too many free passes — like hitting batters, fielding errors, giving up walks and also extra bases with wild pitches and passed balls,” Bragga said. “It was too many free passes and UTSA did a good job of being able to capitalize on every one of our mistakes.”

According to Bragga, this weekend was especially disappointing for the Owls after their thrilling victory against Texas A&M University last Tuesday,

“You come out of Tuesday at Texas A&M and what a great win that was for us, and a great job by our pitching staff and a great job by our defence,” Bragga said. “But again, it comes down to consistency. You can’t play this game good one day and then bad the next or good one game and bad the next. You need to be consistent and we are not right now.”

After the weekend, Bragga said that the Owls will look to improve on the defensive side of the ball, starting on the mound.

“I think in general our starting pitching has got to better,” Bragga said. “In three of the games, our starters gave us a combined 9 ⅓ innings and you just can’t have that. We had a couple of relievers that had done really good this year that struggled to command the zone all weekend and led to giving hitters advantages and hitters counts. And yes, ball handling has to improve, we have to do a better job.”

The Owls now hit the road, continuing their conference season with a four-game series against Middle Tennessee State University starting on Thursday. Regardless of the struggles against UTSA, Bragga said he is confident that his team will get back to playing the solid baseball that they are used to.

“Going into Middle Tennessee State, we’ve got to regroup and go in there and be ready to play good baseball,” Bragga said. “This group is capable, we’ve seen that, but we’ve just not clicked on all cylinders yet and we need to.”