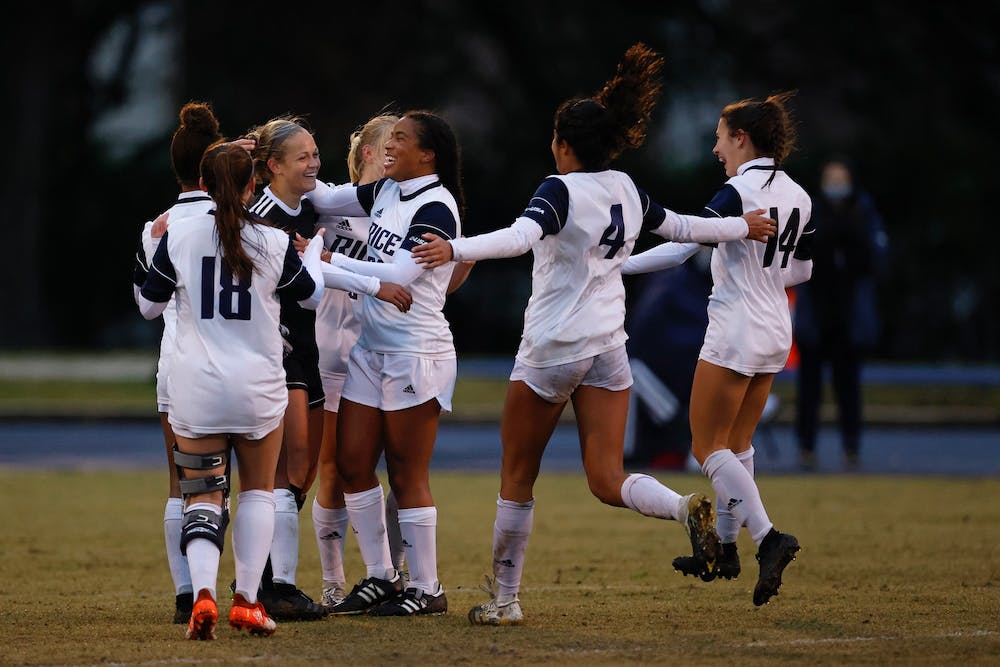 The Rice soccer team defeated the University of Texas at San Antonio 1-0 on Thursday, improving their record on the season to 2-0. Their most recent matchup against Texas Southern University at Holloway Field, which was supposed to be this past Sunday, was postponed. Head coach Brian Lee said The Owls are pleased with how their season has gone so far.

“We are happy to be off to a winning start, but most pleased that we are improving game to game so far in 2021,” Lee said. “We feel like our progressions in team defending are where they need to be and now can turn our attention more towards our attacking buildup and set piece attacking as a primary emphasis day to day.”

While soccer is a team sport, junior goalkeeper Bella Killgore was undoubtedly the driving force behind the Owls’ 1-0 victory. In addition to recording three saves in goal to shut out UTSA, she also scored the lone goal of the evening. In the 70th minute, on a free kick from near midfield, Killgore’s boot found the back of the net, making her the first goalkeeper in Rice program history to score in a game. Lee praised Killgore’s play after the match.

“Bella commanded her area, and her free kicks continue to pose issues for our opponents,” Lee said.

According to Killgore, the free kicks are something she’s been working on for some time. She said that the extra preparation resulting from the pandemic benefitted both her and the team.

“I think the most important factor to our strong start has been the ability to prepare all fall,” Killgore said. “We usually don’t get time to acclimate as a team, with the freshmen, but because of COVID[-19] pushing our season to the spring we did.”

The pandemic played a major role in the buildup to the start of the season as it gave the team ample time to improve on their weaknesses and lead to greater player development. Despite the pandemic postponing the season to start in February, players and coaches alike believe that it had a positive impact on the team.

“The delayed start of the season from August to January has been a huge bonus for the development of our new players,” Lee said. “This allowed them to make an on-field impact in the early going which would have been much more difficult in August.”

A major downfall for most college sports due to COVID-19 is the inability to build strong chemistry and dynamic relationships with each other due to fewer opportunities to interact with other players. However, according to both Lee and Killgore, the team was able to use the pandemic to their advantage to build strong relationships with each other.

“Adversity builds character, and this offseason being heavily restricted by COVID[-19] showed everyone’s grit and resilience,” Kilgore said. “We learned to lean on each other for motivation and energy and because of that, our team chemistry is better than ever.”

Another benefit from the team’s improved chemistry is that the incoming freshmen have had a comfortable and relatively easier transition onto the team.

“I think that all of my teammates have helped me in some way,” said freshman midfielder Catarina Albuquerque. “They all work really hard at practice, which allows me to work that much harder and push myself to be the best I can be on the field. They have a lot of experience in college soccer and I really appreciate all their advice and I try to take in as much of it as I can to try and learn and improve as much as possible.”

The freshmen experienced more growth due to the extra practice and opportunities to bond with the upperclassmen, and it’s starting to show on the field.

“The freshmen have had a huge impact on the team especially in the first couple of games,” Killgore said. “They are scoring side volley game-winners, throwing bicycle kick assists and running around wreaking havoc on the other team’s defense. They all have so much energy and high work rates, raising the level of play at every practice and game.”

The Owls will take on Texas Southern University, who is currently 0-1 after losing to the University of Houston, on Sunday, Feb. 21.