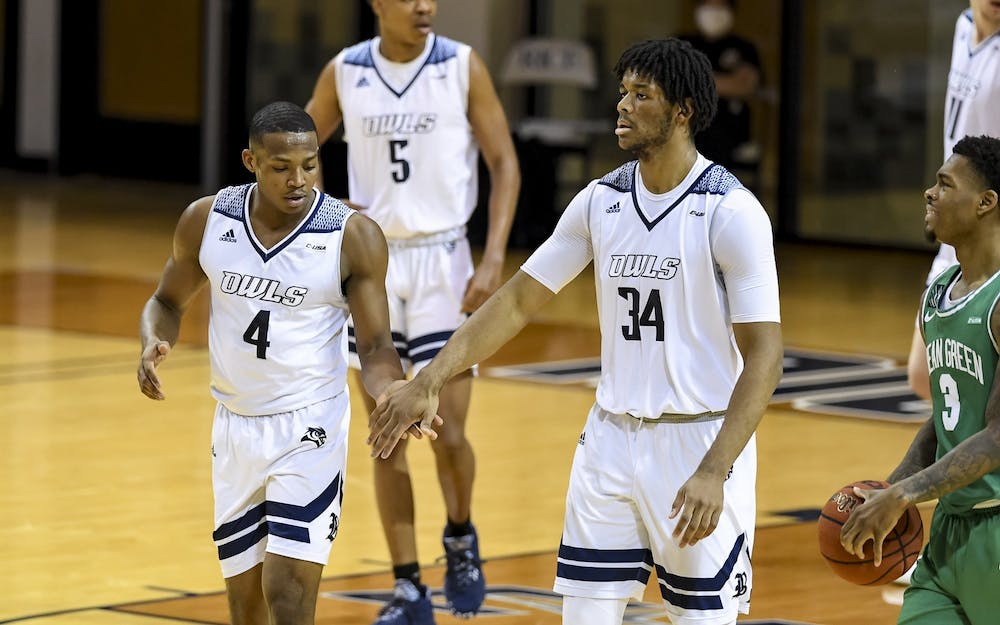 The Rice men’s basketball team won both their weekend games against the University of Southern Mississippi Golden Eagles. The Owls now have a 12-8 overall record with a 6-6 record against Conference USA teams, ranking No. 4 in the conference’s West Division.

Redshirt-sophomore forward Riley Abercrombie said the weekend sweep was very important for the team, which was coming off five straight losses.

“We lost a few games in a row and this was a really big week for us,” Abercrombie said. We knew that we needed to get some big wins, get back on track and build our confidence as we get to the top of our game.”

Owls starting forward Max Fiedler, who made several key plays during the final stretch of Saturday’s win, said he is optimistic for the rest of the season as the team anticipates the return of several key players.

“[Both wins] were really big and, hopefully, next week we will have [junior guard] Chris [Mullins] back and [graduate transfer guard] Tre [Clark] back,” Fiedler said. “We will have the whole squad back for the first time in a long time, it feels like.”

Head coach Scott Pera was very proud of his squad, not only because of their strong weekend performance, but also his team’s overall performance throughout such a precarious and uncertain season.

“We have such a big sense of pride in our guys and this program,” Pera said. “We have seen our share of adversity and we don’t look at it and say that it’s unfair. It is life in a pandemic and we don’t try to make excuses. We just try to get better and better and we have a special group of young men. I am really proud to coach them and proud of how they represent the school.”

One of the attributes that Pera prides his team on is their toughness. Pera has commended the team’s resolve through the season and said he believes that it is a key towards the team’s success not only for this season but for the future of the program.

“Our guys were tough. I thought that’s what they needed to be tough-minded down the stretch and I couldn’t be prouder of what they have done so far,” Pera said. “They are such a terrific group of kids and very skilled basketball players. We have this train on its tracks for years going forward and we are excited.”

A big part of the program’s future is the team’s freshmen. Since many of the team’s older players have missed time due to either injuries or getting COVID-19, a number of freshmen have had the chance to gain valuable playing time. Starting guard and second-leading scorer on the team Travis Evee said that freshmen Cameron Sheffield and Mylyjael Poteat have both been resilient and played invaluable roles for the team down the stretch.

“It’s really cool to see Cam and Mylyjael stepping up,” Evee said. “There has always been the next man up mentality for this team due to the pandemic and that anytime, someone could be out. They are playing really good and it is good to see the freshmen getting comfortable and showcasing what they can really do.”

Sheffield has gotten plenty of playing time and starting opportunities with several key players out with COVID-19 and injuries. Pera was not short on compliments in his praise for Sheffield.

“Cam [Sheffield] is going to be great for us,” Pera said. “He does a really good job of understanding his role and what his job is. He [also] adds value in the locker room, character, everything that we want and he keeps improving. He does whatever you ask him to do and he has a very bright future.”

The Owls will take on Western Kentucky University, the current leader of the C-USA East Division, on Friday and Saturday.