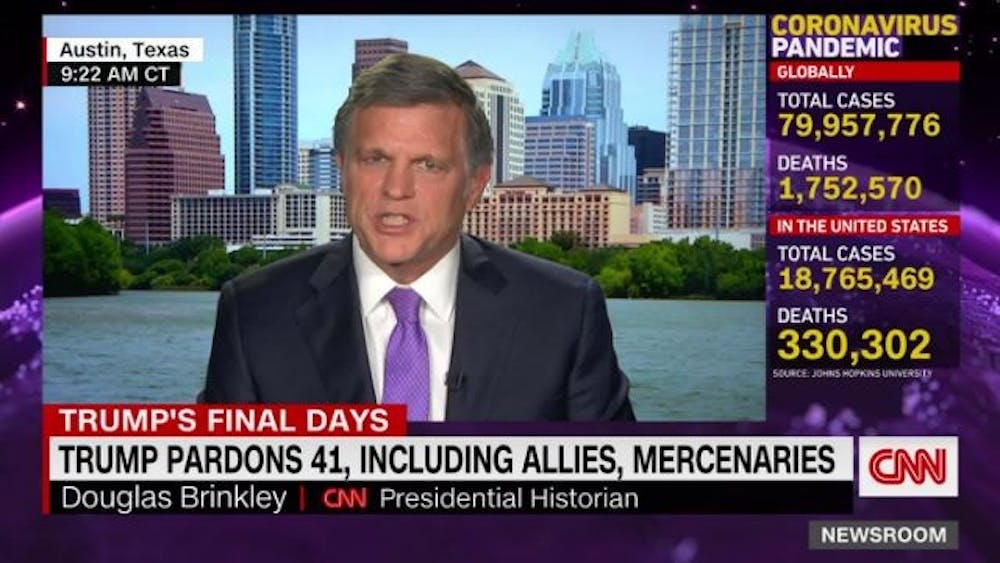 Douglas Brinkley, Rice history professor, weighs in on President Donald Trump’s final days in office on CNN. When he’s not giving lectures or grading papers, Brinkley can often be spotted on major news networks providing insight on the political news of the day. Courtesy CNN.

While the world watched the windows of the U.S. Capitol being smashed and offices of U.S. Congresspeople being vandalized with violent and unwavering conviction in the historic Jan. 6 riot, one of Rice’s own was on call with journalists and TV anchors for hours. His steady yet energized voice is among many in today’s intense news cycle, his commentary offering a contextualization of our current moment as if it is already memorialized. As the headlines seem to get more bizarre and morbid with each passing day, Rice history professor Douglas Brinkley deals in the art of perspective.

When he’s not giving lectures, grading papers or adding to his acclaimed bibliography of over three dozen books, Brinkley can be spotted on major news networks providing insight on the political news of the day. As an official U.S. presidential historian for CNN, contributing editor for Vanity Fair and a frequently cited source in publications like the New York Times and Wall Street Journal, Brinkley has been a heavily-relied upon history source for journalists as they have scrambled to keep up with the unpredictable antics of President Donald Trump’s administration in the past four years.

“History teaches us that our own times are not uniquely perilous,” Brinkley told the Thresher. “The headlines of the day are real, but we’ve seen worse. You gotta put it in perspective and not get breathless, because otherwise every hour you think it's the biggest thing that ever happened.”

Brinkley said his passion for American history was born on the road, largely thanks to the importance his school teacher parents placed on education. He recalls clearly the Pontiac station wagon and 34-foot Coachmen trailer that his family would take on summer road trips to visit historic sites, from American literary giant John Steinbeck’s home in Salinas, California to Dr. Martin Luther King Jr.’s grave in Atlanta, Georgia.

Once Brinkley entered Ohio State University as a history major in 1978, he knew studying the past would be at the center of his career path. Brinkley went on to earn his master’s and Ph.D. degrees from Georgetown University, and has earned himself acclaim and accolades as a preeminent American historian. He has occupied the New York Times bestsellers list multiple times, has been awarded seven honorary doctorate degrees and even won a Grammy Award for providing line notes on a president-inspired jazz suite. CNN’s Piers Morgan summarized his prowess when he referred to him as “a man who knows more about the presidency than any human being alive.”

Thanks to Brinkley’s over 30 years of teaching — which in addition to his tenure at Rice have included positions at the U.S. Naval Academy, Princeton University and Hofstra University —  Brinkley is equipped with the ability to effectively impart his extensive knowledge of American history when tackling the latest news from Washington. Brinkley says history is a trade — in the same way one might see an electrician to repair wiring, he says members of the media and government authorities constantly reach out to him seeking historical information that might illuminate what’s going on today. With just minutes on the air to react to something as shocking as the Jan. 6 U.S. Capitol riot, Brinkley can provide a thoughtful historical perspective.

“It is a day that will live in infamy, as Franklin Roosevelt said at the time of Pearl Harbor, but it’s going to be about what happens in a democratic society when you have a totalitarian as president,” Brinkley said alongside CNN Anchor Wolf Blitzer as they discussed one of President Trump’s tweets following the riot. “[Trump] will pay a very high cost in history.”

In the span of Trump’s term — riddled with controversy, scandals and most recently his “incitement of insurgence” and historic double impeachment — Brinkley says he has found himself in a whirlwind of uncertainty and polarization unlike years before.

“I'm very bullish on the United States, [and] I think we're an amazing country, but the rise of Donald Trump has caused me great consternation because he has a deeply authoritarian bent and has no knowledge of America's past, so he has more of a sense of a dictator than he does an American president,” Brinkley said. “So in the last four years, I've had to almost always be a critic of the Trump administration, and I don't do that with glee, I just have to call balls and strikes as a referee. We can’t tolerate xenophobia, racism, bigotry, sedition and treason, and you have to call it out — you have to talk truth to power, as they say.”

On Monday, Jan. 4, two days before President Trump’s supporters interrupted the Congressional certification of President-Elect Joe Biden, Politico published a letter from over 20 historians condemning efforts to disrupt and overturn the 2020 election results. Co-sponsored by Brinkley and Princeton University history professor Sean Wilentz, the statement stressed the unprecedented threat of a losing presidential candidate attempting to “brazenly sabotage” the electoral process, citing historical examples of previous elections and the legal and procedural integrity of state and federal courts.

“We urge you,” the letter concludes, “whether you are a Republican, Democrat, or Independent, to express your opposition to this latest attack on the bedrock principle of our constitutional system: the sovereignty of We, the People, and the power of the majority to choose our leaders and shape our future.”

With retrospect to the Jan. 6 Capitol riot, the statement reads as almost prophetic.

“We try to do our part, as citizen historians, to alert people that this was happening and sure enough, 48 hours later it did,” Brinkley said.

Brinkley admitted that although history has equipped him with an informed insight to predict and analyze the trajectory of events, nothing has shocked him quite as much as the rise and proliferation of Trump himself.

“All of it [has been unprecedented] in the sense that we’ve never had a fascist president before,” Brinkley said. “We’ve had conservatives. I've edited Ronald Reagan's diaries that Nancy Reagan gave me, I've written on Theodore Roosevelt and Abraham Lincoln and other republicans. It's not a partisan thing — what Trump was doing was undermining the soul of our democracy ... We've had really bad presidents, we've had presidents that were slave owners, we’ve had presidents that were racist but we've never had a president that wanted to destroy the United States until Donald Trump.”

Brinkley’s deep expertise in politics is derived from far more than history books. Over the years, Brinkley has personally met dozens of prominent American figures, from civil rights leaders like Rosa Park to writers of the Beat Generation Ken Kesey and William S. Burroughs, to several former U.S. presidents including Jimmy Carter and Gerald Ford. He has utilized his vast knowledge of 20th century America to offer courses at Rice such as HIST 259: U.S. in the 1960s and ’70s, which covers the extreme political, social and cultural turmoil of the 1960s and 70s in the U.S.

Looking back at those tumultuous decades alongside Rice students last semester provided a particularly poignant reflection of 2020, Brinkley said.

“The students always have good questions and it’s neat thinking about figures of the ’60s and ’70s … the role of Black Panther leaders makes me think of how that connects to the Black Lives Matter movement, or talking about Rachel Carson helps me think about climate change today,” Brinkley said. “We experienced [the killing of] George Floyd in Minneapolis over the summer and protested against police malfeasance, and you know, when Martin Luther King [Jr.] was shot in 1968 there were 115 riots in American cities. It just helps you put things into perspective.”

With the nation holding its collective breath as Inauguration Day approaches, Brinkley says that there are still many important conversations to be had.

“There's some existential threats that I'm worried about, like climate change, that we haven't really been able to get our hands around or even have a great discussion in the public square,” Brinkley said.

Though 2020 was a year chock full of apocalyptic anxiety, Brinkley says that American society has come a long way in battling the ills of 2020, and that hope is as vital as ever.

“I'm not one of these scholars who feels that this is the decline of America in 2020 and 2021. I mean, after all, with all those cyber threats we had, we ran a flawless election in 2020, all the states did a great job of keeping it organized through a pandemic, we had record voter turnout, which is always the sign of a pulse in a healthy democracy,” Brinkley said. “There’s no American recovery without dealing with COVID … but we're through the worst of it after the inaugural, and you have to think better days are here to come.”