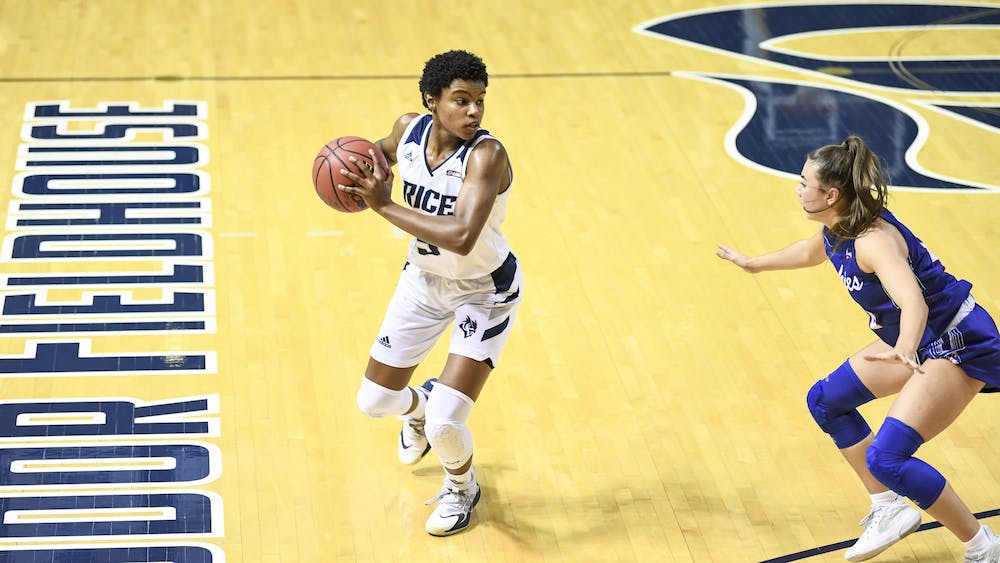 The Rice Women’s Basketball team is just three games into the 2020-2021 season, but their year is already off to a promising start. The Owls are 3-0 and are beating their opponents by an average margin of 20 points per game. According to head coach Tina Langley, their strong start is an indication of how much the team has grown.

“We are very pleased with the growth of our team,” Langley said. “I’m excited about how we’re approaching and valuing the process.”

The Owls began their season Nov. 25, with an 83-54 win over Houston Baptist University. They followed it up with a win over the University of Arkansas at Little Rock three days later. According to senior guard Sydne Wiggins, the team has been inspired by an added sense of appreciation after the COVID-19 pandemic put the fate of the entire season up in the air.

“Coach Langley has [told us] since September that nothing is promised this season,” Wiggins said. “We go into each game with a heavy sense of gratitude and passion.”

The Owls made a particularly strong statement in their most recent game on Dec. 5, where they. defeated Texas Tech University by a score of 81-62. The win over Texas Tech, who play in the Big 12 Conference, marked the first time that the Owls have beaten a team from one of college athletics’ Power Five conferences since 2006. Langley said that she credits the team’s defense, which held Texas Tech to a season-low in points so far, with the win.

“We were really pleased last game with the way we executed the defensive plan,” Langley said. “The team did an outstanding job preparing and then executing that plan.”

Rice's offense also played a large role in the win. Led by sophomore Destiny Jackson’s team-high 15 points in just 21 minutes, the Owls’ 81 points were 25 more than the Red Raiders had allowed in any game this season., This production was due in large part to the fact that they made 12 of their 23 attempts from 3-point range.

Rice has come close to beating Power Five opponents a number of times in recent years. Last year, the Owls lost to Texas A&M of the SEC, a team that was then ranked No. 5 in the country, by only one point, and Georgia Tech of the ACC by two. However, Langley said that Rice didn’t prepare any differently for the Texas Tech game, knowing that they had a chance for that elusive Power Five victory.

“Every game is very important to us,” Langley said. “It doesn’t matter the size of the school or what conference the team is in, we treat every game the same. I think that has been evident in our first three games. Our commitment to preparation has been very, very good.”

The milestone is the latest for a program that has racked up a number of firsts in recent years. Two years ago, the Owls earned their first AP top-25 ranking in program history, and won Conference USA for the first time since 2005. Last year, the Owls finished the season atop the conference, and were set to play in the conference semifinals in March before they were canceled due to COVID-19. According to Wiggins, who had 12 points and six assists against Texas Tech, this year's team is proud to have achieved a significant milestone of their own.

“It feels amazing knowing our success now [has] a historical marker,” Wiggins said.

Langley said that she is proud of how the team was able to adjust during a strange offseason affected by the COVID-19 pandemic.

“COVID changed everything for everyone,” she said. “But I think our staff and team have done an exceptional job of staying focused on the moment and just doing the next thing right.”

In particular, she said the team has managed the uncertainty by being ready to play, regardless of factors outside of their control.

“We have a theme this season, [be] ‘ready for the call,’” Langley said. “Any given day we could get the call that we have to go into quarantine, or that we’ve lost a game, or that we get to play a game, or we get to play a new opponent we weren’t expecting. You never know when you’re going to get that call. The question is how you will respond.”