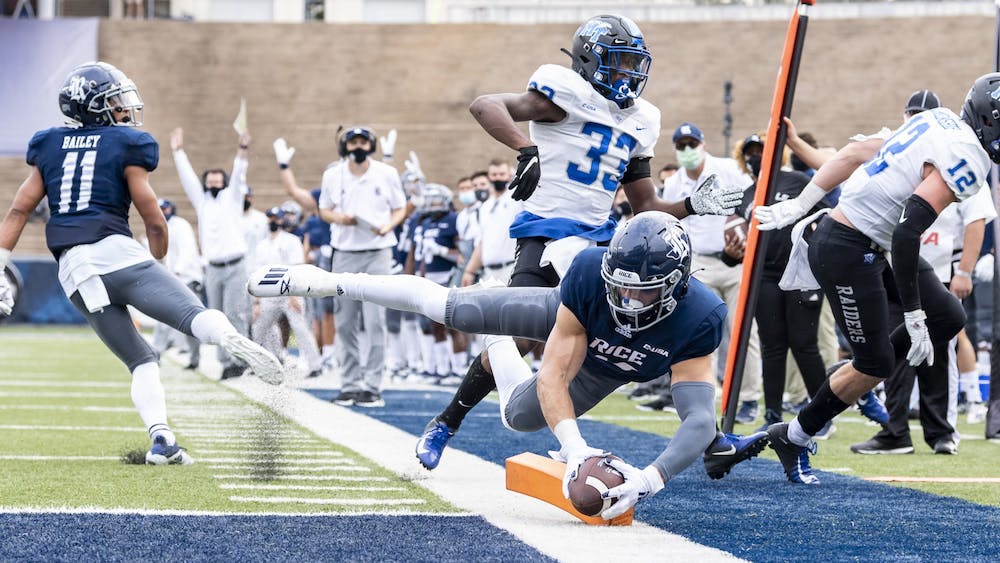 The Rice Owls football season has encountered several major hurdles this season. The team has played only two games thus far, and has had two games postponed due to COVID-19 safety precautions. However, a bright spot for the team has been its consistent offense, which has scored 32.0 points per game on average, ranking No. 45 in the nation. A key player contributing to the success of the Owls’ offense is senior wide receiver Austin Trammell.

Trammell, a team captain, has filled the stat sheet in numerous categories. Over the course of two games, Trammell has caught 10 passes for a total of 219 yards, scoring five touchdowns and a pivotal two-point conversion. Furthermore, Trammell leads Conference USA in scoring with 16 points per game and ranks No. 2 in the conference, tallying 109.5 receiving yards per game. According to Trammell, his expanded role in the offense has given him more of a chance to impact games.

“Every team needs a guy to go out and make plays in order to win games,” Trammell said. “I challenge myself to be that guy that goes out to make plays, to change the field, to change the momentum and I just kind of put it on myself to do that.”

Trammell’s biggest plays this season came near the end of Rice’s season opener against Middle Tennessee State University. At the end of the fourth quarter, Trammell caught a field-flipping, 48-yard catch on 4th and 24 with less than a minute to go. He subsequently caught a 20-yard touchdown and two-point conversion, giving the Owls a temporary lead.

“It definitely was a cool play,”  Trammell said. “It was a lot cooler after, to look back and reflect on how big of a moment that was.”

Along with his prolific scoring and his big plays, Trammell has also earned several accolades, including the Hornung Honor Roll and College Sports Madness C-USA Player of the Week, while also being placed on the watchlists for the Paul Hornung Award and the Earl Campbell Tyler Rose Award. Trammell said he appreciated being nominated for these awards, but chooses not to focus on them.

“It feels good to be recognized, obviously, because you do work hard and it is nice to be rewarded but, I don’t really focus on that stuff,” Trammell said. “My focus is on the team and whoever we play that week, but it is definitely nice to be rewarded for doing well.”

Only two games into this short season, Trammell has surpassed several of his career highs in various statistical categories. His five touchdowns to start the season have already exceeded his totals from the past two seasons. He also set a new career-high for receiving yards in a game after his 143-yard effort against the University of Southern Mississippi. Trammell believes that these career highs show his growth as a player.

“We have a great chance of going to a conference championship and winning a bowl game,” Trammell said. “We know that we are good enough to do it.”