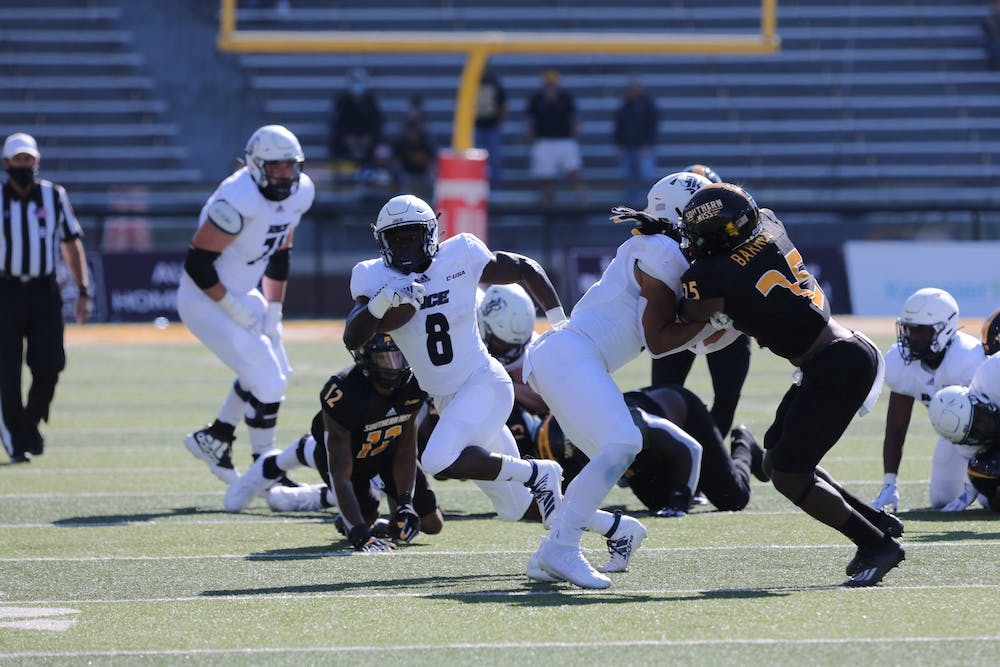 The Rice football team got their first win of the season this past Saturday against the University of Southern Mississippi. Playing an away game in Hattiesburg, Mississippi, the Owls piled up 30 points on the Golden Eagles, giving up only six. Rice’s overall record is now 1-1, while Southern Miss has dropped to 1-5. After the game, head coach Mike Bloomgren had high praise for the players.

“Really proud of our guys for coming in here, staying focused and getting a conference win on the road which we all know is so freaking hard to do,” Bloomgren said. “Gosh it is nice to win, it's nice to win.”

Rice came out of the gate with a lot of momentum, scoring 23 points and only allowing Southern Miss to score three points in the first half of the game. Starting quarterback Mike Collins, a graduate transfer from Texas Christian University, said he is confident in the offense’s ability to build on this game's success going forward.

“This week we showed you that we're just scratching the surface,” Collins said. “There’s a lot more we can do. I think we are gonna have a pretty good football team, but we gotta keep working.”

The Rice defense also provided plenty of opportunities for the Owls’ offense early in the game, as Rice forced Southern Miss to turn the ball over three times within the first couple of drives of the game.

To start the game, the Golden Eagles offense marched 60 yards down the field, only to turn the ball over after failing to convert on fourth down and short. After the Rice offense failed to capitalize on this turnover and went through their only three-and-out of the game, Southern Miss turned the ball over on their next possession. This time, Golden Eagles quarterback Jack Abraham threw a pick to Owls junior cornerback Miles McCord for McCord’s first career interception. Junior linebacker Antonio Montero acknowledged the defensive changes that were made to enable the Rice defense to force turnovers throughout the game.

“We settled in and talked about some stuff that we weren’t used to and we just had to adjust,” Montero said. “Coach Smith did a really good job in adjusting which helped us to start stopping them … We came at it with a more intensive attitude this week because of the results of last week.”

The Owls took this turnover and assembled a roughly seven-minute drive where they went 80 yards down the field in just 14 plays. The drive culminated in a successful 21-yard field goal by graduate kicker Collin Riccitelli.

After a sluggish first quarter, the Rice offense got in sync with good production from both the passing and running game. Collins completed 12 out of his 17 pass attempts, accumulating 233 yards and scoring four touchdown passes. This stat line gave Collins a passer rating of 263.4. Collins' seven passing touchdowns to start the season have been the most passing touchdowns for the Owls in back-to-back games since 2014.

Senior wide receiver Austin Trammell also had a career day on Saturday as he extended his streak of consecutive games with a reception to 29 games. Trammell caught seven passes for a career-high 143 yards while scoring three touchdowns. Within the first two games of this short season, Trammell has already surpassed his career-high of touchdowns in a season after scoring five times in the past two games. The senior wide receiver has also accumulated a total of 219 receiving yards on only 10 receptions so far this season. Bloomgren applauded Trammell’s performance on Saturday.

“There’s Austin Trammel, our captain, who never surprises me,” Bloomgren said. “But gosh, he came through in a big, big way tonight; probably had a career day in touchdowns and yardage.”

Rice’s offense also accumulated a total of 179 yards on the ground. Starting running back Juma Otoviano had his second career 100-yard rushing game as he ran for 111 yards on 25 attempts, averaging 4.4 yards per rush. Freshman Khalan Griffin added 41 yards on 12 carries.

The Rice defensive line also stymied the Southern Miss offense. Montero and senior linebacker Blaze Alldredge tallied 10 and eight tackles, respectively, while both had 0.5 tackles for loss. Redshirt freshman safety Chike Anigbogu, who started for the first time in his Rice career, forced a fumble while recording four total tackles in the game. Josh Pearcy, a redshirt freshman from New Jersey, tallied three total tackles with his first career sack and 1.5 tackles for loss. Bloomgren said he liked what he saw on defense.

“Coach [Brian] Smith did an unbelievable job on the sideline getting these guys rocking and rolling the way he did,” Bloomgren said. “I thought that was a dominant performance by our defense and what we come to expect from them.”

Next Saturday, Nov. 7, the 1-1 Owls return home to face off against the University of Texas at San Antonio (4-4).