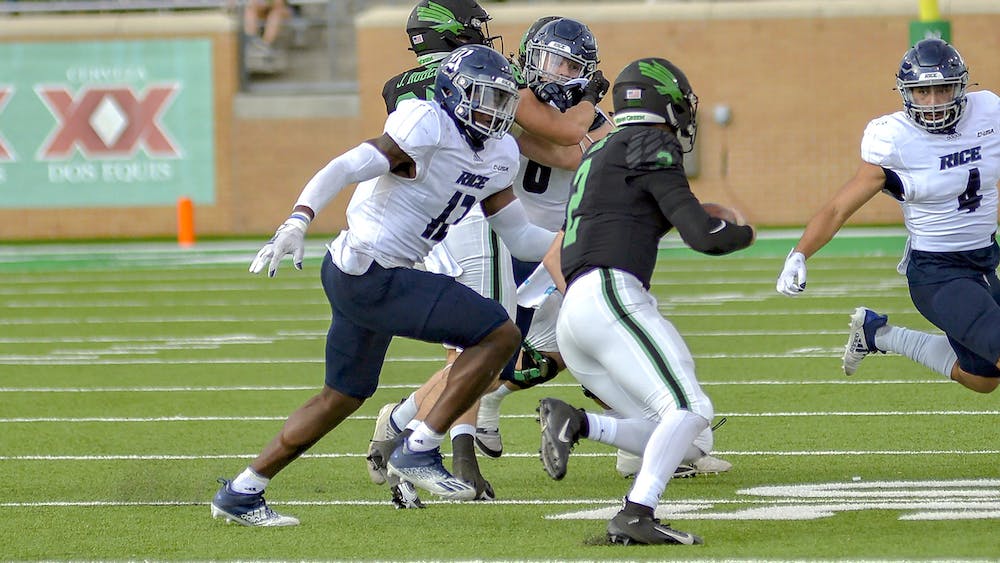 Rice lost to the University of North Texas on Saturday by a score of 27-17. The loss dropped the Owls’ record to 1-2 on the season. Meanwhile, the Mean Green improved to 3-3 with their win.

The Owls started out strong, scoring the game's first ten points out of the gate. However, the Mean Green put up 27 unanswered points to take a 27-10 lead, before an Owls touchdown in the final seconds narrowed UNT’s lead to 10. Head coach Mike Bloomgren said that he doesn’t know what caused this sudden change in Rice’s play.

“We started off the game as well as we could [have],” Bloomgren said. “For ten minutes, we played our kind of football, and did the things we needed to do. Then I have no idea what switched, but we quit doing our jobs, and quit doing the things we’re supposed to do.”

Saturday marked the first time the Owls had played a game in 21 days. In each of the previous two weeks, the Owls had a game canceled due to members of the opposing team testing positive for COVID-19. UNT hadn’t played in five weeks due to COVID-19-related cancellations. Bloomgren said while this was challenging, Rice can’t attribute the loss to shaking off rust after the long delay.

“It felt like a game one all over again,” Bloomgren said. “You’d love to say ‘well, we had three weeks in between games, and that’s hard,’ but they had five weeks [between games]. They did a better job dealing with it than we did.”

To start the game, Rice took their opening possession 48 yards, resulting in a 45-yard field-goal by kicker Collin Riccitelli. After forcing a quick UNT punt, Rice then took the ball 97 yards on their second drive of the game to score a touchdown and increase their lead to 10-0. Their defense, meanwhile, held UNT’s top-ranked offense in the conference to three-and-outs in two of their first three possessions, and limited them to only one first down during that span. Rice’s next two possessions also saw them move the ball deep into UNT territory. However, they were unable to capitalize, with one drive ending in a fumble, and the other ending in a turnover on downs. As a result, they failed to extend their lead beyond 10 points.

Through roughly 22 minutes, Rice appeared to be in control of the game. They had gained 221 yards while holding UNT to only 19. During that time, they held the ball for 17:24, while UNT only had possession for 4:23. According to senior linebacker Blaze Alldredge, who had a game-high 11 tackles, the strong start caused the Owls to become complacent.

“We got comfortable, we stopped focusing on our assignments,” Alldredge said. “And when you’re facing the number two offense in the country in terms of yards per game, those are things that you can’t do. We knew that this offense was a slow starter and a hard finisher, but for some reason we forgot about that.”

The Owls’ fortunes turned in the middle of the second quarter. With 6:56 remaining in the second quarter, UNT quarterback Jason Bean ran 66 yards for a touchdown, cutting Rice’s lead to three. According to Alldredge, Bean’s touchdown proved to be the turning point.

“There was a change in mindset after [Bean’s touchdown],” Alldredge said. “That big play gave them the momentum and they ran away with it after that.”

Following Bean’s score, the Mean Green forced an Owls three-and-out. Rice’s defense returned the favor, forcing a UNT three-and-out, but Rice fumbled the ensuing punt, giving UNT the ball at the Rice 38-yard-line. Six plays later, Bean connected with receiver Jaelon Darden for a 25-yard touchdown. In the span of just over five minutes, UNT had erased a ten-point deficit, and taken the lead by four points heading into halftime.

The Owls hung around in the third quarter, holding the Mean Green to just a field goal, and keeping the game within one possession. However, the Owls’ offense wasn’t able to cut into UNT’s lead. According to Bloomgren, the Owls had plenty of opportunities to get the lead back, but failed to capitalize.

“We had chances in the second half,” Bloomgren said. “We just didn’t take advantage of them.”

Another UNT field goal early in the fourth quarter extended the lead to two possessions, before a one-yard touchdown run by running back DeAndre Torrey with seven minutes remaining extended the lead to 17, and put the Mean Green comfortably ahead. Rice’s next drive stalled at the UNT 44-yard line, resulting in a turnover on downs, and, with UNT already up three possessions with under three minutes remaining, effectively ending the game. A 17-yard Jake Bailey touchdown with eight seconds remaining brought the deficit to 10, but by then the game was all but over.

Senior receiver Austin Trammell continued his strong start to the season, with 116 yards and a touchdown. In his first start for Rice, freshman running back Khalan Griffin totaled 72 yards on 20 carries.

While quarterback Mike Collins threw for over 300 yards for the first time this season, Rice struggled to protect him from UNT’s pass rush. The Owl offensive line surrendered seven sacks on the day. UNT nose tackle Dion Novil stood out on Saturday with one sack to go along with five tackles for loss and two forced fumbles. His performance earned him college football defensive player of the week honors according to football statistics site Pro Football Focus.

On defense, Rice held UNT’s explosive passing game to a season-low 120 yards. However, UNT’s rushing attack was able to put up 242 yards on the Owls, 94 of which came from Bean. Despite this, Bloomgren said that he was happy with how his defense was able to contain Bean, aside from his long touchdown run.

“We knew the quarterback was dangerous when he got out of the pocket,” Bloomgren said. “We did a great job keeping him in there, aside from one play.”

The Owls return to the field next Saturday to host the University of Texas at El Paso. According to Bloomgren, the Owls have to move past the loss and prepare for their next game.