Black Art at Rice: A Conversation with Chelsea Sharpe 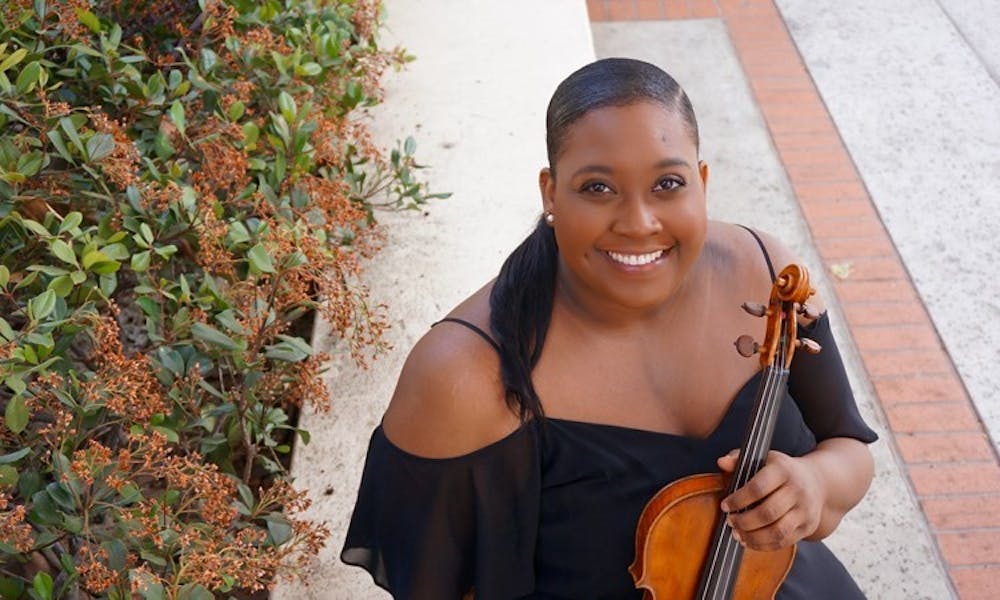 From performing for world-renowned classical musicians to recording music for Kanye West and “The Late Show with Stephen Colbert,” Shepherd School of Music alumna Chelsea Sharpe (Lovett College ’15) has done it all. As she reflects upon key experiences and lessons that have shaped her journey to becoming a professional violinist, Sharpe offers her perspective on the role of music in politics, representation and empowerment. She is currently a fellow at the prestigious New World Symphony Orchestra and works remotely with students from Medellín, Colombia as part of an educational outreach program.

Chelsea Sharpe: Rice is great. I mean, musically, Rice is considered one of the best programs. And so it was kind of always on my radar when I was looking into schools, and I was really excited to have gotten accepted. I love the fact that I had the intensity of the music school, but also kind of the variety and diversity of the larger university. So it was nice to have that really intense focus at Shepherd, but then go back to Lovett and talk to people who were studying all sorts of really interesting things, and had different interests.

RT: What kinds of musical ensembles or events have you participated in since graduating from Rice?

CS: After Rice, I went to [the University of Southern California], so being in downtown [Los Angeles], I had the opportunity to do some studio work for film and TV. I played for Kanye West, I’ve [recorded] music for TV performances, for [Black Entertainment Television] awards and the “Colbert Show,” so that was kind of cool. And then I’ve done some touring internationally, I played on a cruise ship in Alaska and the Mediterranean. I think that’s one of the cool things about leaving school, is you have a little bit more freedom to really explore how far and how creative you can get with your instrument.

RT: Do you have a musical role model or any favorite musical artists (from any genre)?

CS: One of my favorite artists, who I think just embodies so many of the values that I really love, is Nina Simone. I love how unapologetically herself she was in her identity as a Black woman, and as an artist who wasn’t really afraid to speak on the political climate of the time, and make her art relevant. Sometimes in classical music, I feel like we like to think that we’re existing kind of in a vacuum, and we’re just in our concert hall, and everything that’s happening outside doesn’t have anything to do with what’s happening inside. But the truth is, a lot of this music was written under extreme political circumstances, and in major watershed events in history, and I love the fact that Nina Simone was just fearless in making her art speak to the times and for the people that she represented. It’s something that I tried to keep in the back of my mind as I progress as an artist and a creative.

RT: What is your perspective on the representation of Black composers and Black musicians in classical music?

CS: Yeah, there’s been a large push, especially after this, you know, particularly heinous summer of anti-Black violence over the summer. There’s been a large push to bring that repertoire to the forefront, repertoire coming from African diasporic composers, and I’m glad for it, I’m grateful. It’s definitely way too late. What I think people forget is when you exclude these composers — and it’s not always conscious, although sometimes it has been — I think the overall art form suffers. Students don’t receive the education that we probably deserve when we’re not hearing [and] studying this music, when we’re not understanding the enormous impact these composers had on the American and international musical landscape in classical music. So, we’re really doing ourselves a disservice when it gets ignored, left off of programming, left out of the curriculum. So, I’m really excited. It’s very encouraging to see more robust efforts made to do the research and to include this repertoire in those spheres, because I think it’s music that deserves to be heard. It’s good music and the influence on the art form is undeniable. So those are things that definitely deserve more attention, for sure.

RT: What advice would you give aspiring musicians of color?

CS: The advice that I would give aspiring musicians of color is for them to understand that even if they are the only one in the room — and in many cases they will be — that they absolutely deserve to be there. If they’re there, they deserve to be there. I know a lot of people deal with this, but imposter syndrome is real, just to understand that you deserve to be there. And you deserve to have your voice heard. And, you know, it’s not going to be an issue of if difficulties arise. When difficulties arise, you have to remember that there really is an entire community of people who came before you, who are rooting for you — not just your family and your friends, but I literally think almost in an ancestral sense. There are people who dreamt that I would be able to do what I’m doing now, you know — it’s incredibly empowering, I think, when you look at it from that perspective.

RT: Can you describe some challenges that you’ve had to overcome on your journey as a professional musician?

CS: Just that feeling, like, “Am I good enough? Do I make a powerful enough statement?” The landscape that we have for auditioning for orchestras is incredibly competitive, professional orchestras, and in many cases, it takes years and a lot of lost auditions to get to where you want to be. So I’m currently navigating that. And in the meantime, just maintaining [inspiration] throughout the hardships that will inevitably — I think for all artists, we face hardship with things like imposter syndrome, and just wondering if what you are so passionate about really has a place in the world. And coming to the realization that of course if it’s something you’re passionate about, it’s always worth pursuing.

RT: Could you speak on the role of music during difficult times, especially during the pandemic?

CS: There’s no denial that music has an incredible healing power, just by design. It’s like, for a moment, you’re just able to slip into a place where there isn’t as much suffering. And I think musicians carry a special talent; we are special vacuums for that type of experience. I feel honored to be a part of that group. I think music has a responsibility to respond to what’s happening in the world and in the country. In doing that, we can facilitate conversation and we can act as a tool of healing.