Antsy Owls plan return to field against UNT this weekend 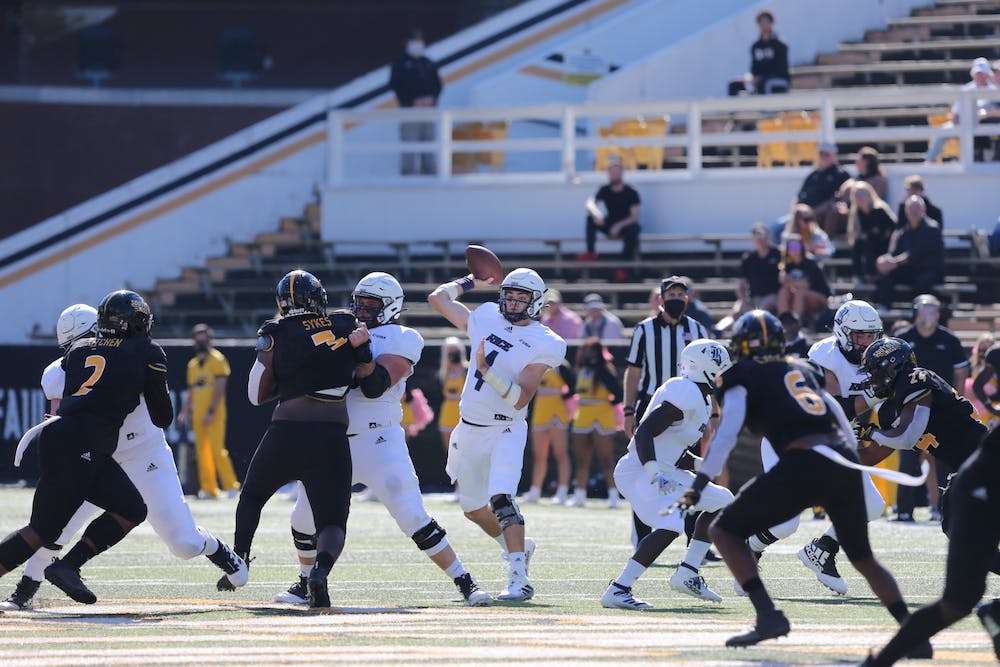 When Rice takes the field against the University of North Texas on Saturday, it will be the Owls’ first game in 21 days. After a 30-6 win over the University of Southern Mississippi on Oct. 31, Rice has seen their last two games postponed due to COVID-19 cases within their opponents’ programs. The 1-1 Owls now have to regroup from their unscheduled two week break in order to face a Mean Green team that enters the game with a 2-3 record. Head coach Mike Bloomgren said he is proud of how his team has been able to improve despite these challenges.

“We’ve all done a good job as a coaching staff and as players weathering [the storm],” Bloomgren said. “Even though we’re not getting the payoff in terms of [playing] the game, what we’re doing is not for nothing. We are getting gains [in] practice, we are making progress.”

While he emphasized the importance of being able to adapt to these changes, Bloomgren said that the cancellations have been frustrating at times.

“There’s a human element to it,” Bloomgren said. “[One of] the hardest things I’ve had to do this year is get on a Zoom call and explain to our team that even though we’ve done everything right, we don’t get a chance to play that week, and then [tell] them to keep doing everything right, and keep making those selfless decisions.”

However, Bloomgren said that the Owls have refused to let the frustration and disappointment affect them.

“We’re going to have that initial disappointment, and then we’re going to move forward,” Bloomgren said. “You can sit there and act like a victim, but [that’s] a mindset that we don’t subscribe to in this building.”

UNT is also coming off an extended break due to COVID-19. Their last three games have all been postponed due to COVID-19 concerns, and they haven’t played since their Oct. 17 win over Middle Tennessee State University. Before their season was put on pause, the Mean Green were consistently involved in high-scoring games — they have both scored and allowed more points per game than any other team in the conference. According to Bloomgren, facing the Mean Green has an added significance for him and his staff.

“[When] we came in as a new staff, North Texas had just won the [C-USA West, which Rice is a member of as well], and they were the program we were chasing,” Bloomgren said. “We’re going to have some great battles with them as we go. So it’s a big-time game for us.”

UNT’s offense is led by receiver Jaelon Darden. The 5-foot-9-inch senior from Houston has been the focal point of UNT’s offense this year. His 137.8 receiving yards per game currently ranks No. 3 in the NCAA, and he leads the NCAA in receiving touchdowns with 10, despite having played only five games so far. Darden will test the Owls’ pass defense that has allowed the third-most yards per game  of any team in the conference.

Darden has been able to put up these numbers despite turnover at the quarterback position. UNT began the season with redshirt sophomore Jason Bean under center. However, Bean was replaced by fellow redshirt sophomore Austin Aune during their week two loss to Southern Methodist University. Aune held the starting job until their most recent game against MTSU, when he was replaced by Bean after throwing two first quarter interceptions. Bean came in to lead the Mean Green back from a 21-7 deficit, with two touchdowns through the air and three on the ground.

Following the game, Bean was named UNT’s starting quarterback going forward. Bloomgren said that he was impressed with what he saw from Bean, but he knows that either quarterback is capable of leading the offense, especially with receivers like Darden to throw to.

“What they found in the second half against Middle Tennessee was that Jason Bean gave them a spark,” Bloomgren said. “I think they probably found their guy in Jason Bean, he’s the one that we’re going to prepare to stop. But if Austin jumps in there, their offense won’t change too much, they’re still going to try to find Jaelon Darden.”

Meanwhile, Rice’s offense will look to exploit the Mean Green’s last-ranked defense, which has allowed the fifth-most points per game in all of college football. UNT has particularly struggled to defend the pass, allowing over 300 yards per game on the season. This figures well for the Rice passing attack, led by graduate transfer quarterback Mike Collins and senior receiver Austin Trammell, which ranks No. 4 in the conference with 237.5 yards per game.

Kickoff is at 1:00 p.m. on Saturday in Denton, TX. The game will be broadcast on ESPN3.