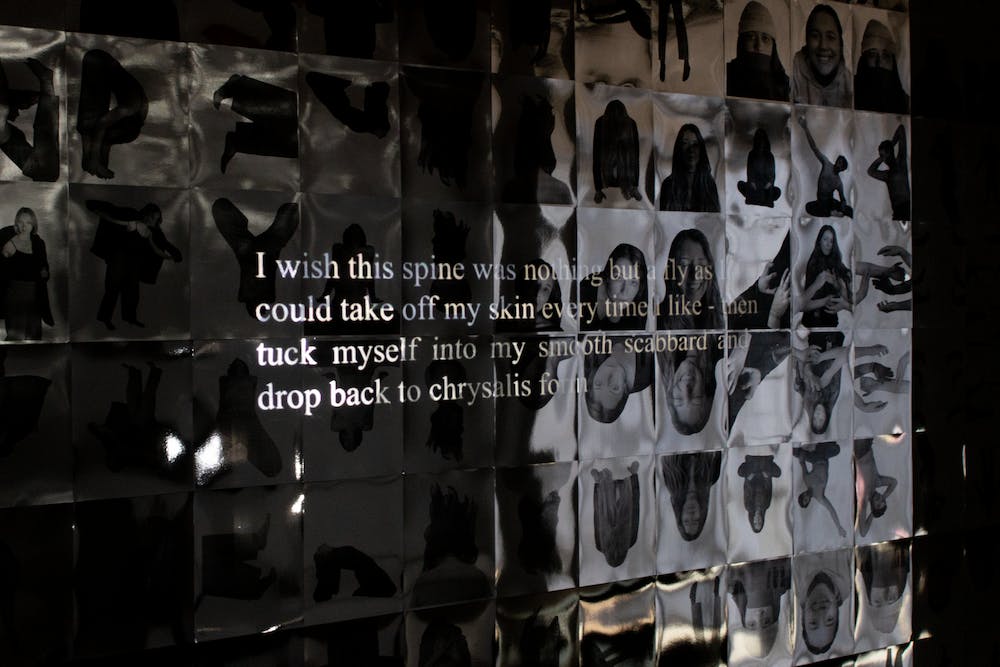 A fusion of photography, poetry and light projection, “A Kind of Rebirth” by Federica Adriani and Lovett College senior Varun Kataria is the latest installation at Sleepy Cyborg Gallery in Sewall Hall. Printed on reflective paper, Kataria’s portraits cover one wall while Adriani’s poems are projected on them like a cycling Star Wars opening crawl. On view in person and online through Thursday, Nov. 12, the exhibition is the product of a study abroad experience that brought the pair together and their conversations about the idea of growth.

Kataria is the only Rice student artist to be featured at the gallery this semester, which Sleepy Cyborg Director Isabel Samperio said was a reason to curate his and Adriani’s work. She said the space aims to put both local and Rice artists first.

To see the installation, I scheduled a time with the gallery after dark, described by Samperio, a Hanszen College senior, as the optimal viewing time. With the lights off and the sun gone, the 200 photographs, most of which are portraits, were reduced to silhouettes. The mirror cardstock they were printed on bounced white light coming from the Sewall Hall courtyard outside, and the atmosphere was set. Samperio turned the projector on and for the 12 minutes it took to show Adriani’s 12 poems, I was entranced by the warping lights and ambient, droning music. Each poem took turns scrolling upward, their deep red titles pausing before continuing to crawl up the wall. During the periods of motion, my attention was drawn to the distorted shimmers in a large rectangle that surrounded the words, captivated by their asymmetrical variance.

The idea for the project sparked when Adriani, a graduate student at L’Università di Bologna, met Kataria during an exchange program at The University of Edinburgh in Scotland last spring. As they became friends, Kataria shared his photographs and Adriani her poetry, and they decided they wanted to create something bigger involving both mediums to make an existential commentary.

“Something we talked a lot about was this idea of rebirth and how we as people feel like we’re reborn every single moment; there’s constantly parts of ourselves that are dying,” Kataria said. “You’re a constantly changing, fluid human being. Because it was on the front of our minds, it was something we also wanted to reflect in our art.”

In January, Kataria and Adriani reserved a gallery space at the Edinburgh College of Art for April so they could have a goal to work toward, and shot series of portraits of their study abroad friends in February. After the study abroad program was canceled in March due to the pandemic, motivation waned into the summer until Sleepy Cyborg offered them an exhibition space. Since he shot on film and was sent home while it got developed in Edinburgh, the photographs Kataria worked with for the installation were reprints he received by email.

To blend the mediums of poetry and photography, Kataria suggested that they project Adriani’s poems onto his photographs, and Adriani suggested using reflective paper for the photographs to complement the concept of light.

“To make the reflective paper [shine] as strong[ly] as possible, you want no background, so each photo was photoshopped to remove the background,” Kataria said. “It becomes a lot more about negative space rather than focusing on details of the image. You can kind of see this distorted image of yourself in the paper: ‘Who am I looking at? Is this a new version of myself every single moment when I look at this reflection?’”

The mantra “To repeat means to evolve” was a central guide to the project, directly and indirectly apparent in each medium. Repeated after every third poem of Adriani’s, it resounds like a Glory Be at the end of a rosary’s first three Hail Marys.

“The repetition of the death of a part of the self allows for the change of a person,” Adriani said. “Some photos are repeated: There are many copies of some photos, for example. For every photo, there is one [flipped upside down below it]. It’s a lot about repetition. The poems are in a projection and are evanescent — but are in loop.”

While the installation’s photographs are posted online, there they’re not arranged in the order seen in the gallery. Kataria described the importance of seeing the letter-sized images in their intended conformation.

“We had a lot of photos to work with, and thinking about how to arrange them — because a lot of them are thematically different — we thought it’d be very cool in the arrangement of photos if you could look left to right, up to down, take different paths of patterns and [see] they’re all connected,” Kataria said. “It’s just fun to look at it and see, ‘Oh, how’s this picture related to the one next to it?’”

Adriani and Kataria, who are hoping to add to the project before showing it in Bologna, Italy, said they wish to hear viewers’ impressions and suggestions.

“A Kind of Rebirth” is on view in-person at Sleepy Cyborg Gallery until Nov. 12. The photographs, poems and a 360-degree video are viewable online at matchbox.rice.edu.